Finding the Humor in My Husband Buying Me Diapers

“Would you rather wear Tena or Always?,” my husband asks.

“Well, this one can absorb a whole bladder filling,” he responds.

“Just take any of those. I don’t care!” I become more snippy.

I don’t like talking about diapers. I am only 30 years old! The fact that we still have to speak about it hits me hard and leaves me very sad, angry and frustrated.

What guy would want to talk about his newlywed’s bladder issues? That is not the kind of bed whispers I had imagined when we married last year, and the situation in which I had to talk about it before going to bed irritated me. It has been a couple of weeks since my bladder complicated my life. A permanent urinary urgency on top of moderate bladder pain decreased my quality of life even further than my already existing diagnosis of Ehlers-Danlos Syndrome. I felt my bladder with every step I took; stabbing pain and burning accompanied me. Even after I went to the toilet, my bladder still felt filled. During really bad days, I had to go to the bathroom every 10 minutes. I wasn’t able to sleep and my doctors weren’t sure what to do; there were too many possible causes. Maybe it was neurological, they said. It could be caused by a herniated disk, it could stay, it could be resolved. Who knows?

I only saw one thing: a 30-year-old woman who, instead of buying nice underwear at Victoria’s Secret, currently buys diapers on Amazon. Or better: let’s have her husband buy those for her. I felt unattractive and sicker than ever before. While images of how my life might look in another 10 years shot into my mind, my husband was sitting there, happily smiling, narrating how fun it would be if we tried on those diapers on the weekend. Of course, everything must be tested before one can use it throughout everyday life, my scientist husband stated.

“I just found a comparison between two brands of diapers on a website for incontinence,” he says.

I grouch. I don’t want any of this, and it makes me furious to see him handling the situation this relaxed. It is not relaxing that I am peeing my pants. His enthusiasm is not understandable for me, and with every funny quote about the advantages of diapers I get more upset.

I yell at him, “How can you be so happy about the fact that your wife has to wear diapers?”

“New York,” he says, and suddenly it clicks. Now, everything seems clear.

He reminds me of a trip we went on together two years ago that had been very stressful for my husband. Back then, I had been in Chicago for some new treatments and he lived in Boston. When I visited him, we decided to go on a road trip to New York. I was not able to drive a car anymore, so Markus had to navigate us through the crazy NYC traffic. Driving there is a challenge for many tourists, but unlucky Markus had an additional burden in his car: me.

Shortly before we wanted to start driving back to Boston, I drank a large cup of coffee. I completely forgot that my bladder was very sensitive to many drinks, especially coffee. 20 minutes later, we found ourselves standing on the most right lane of a seven-lane street in Manhattan’s stop and go traffic. We had not even left the city, and I urgently needed to pee. I know those problems, which is why I usually do not drink coffee before driving longer distances. Unfortunately I was too exhausted from the weekend and completely forgot my own rule.

My bladder started to hurt a lot – like a knife stabbing into my lower abdomen. A huge pressure arose and I almost lost control over my bladder. Soon, the pain became unbearable, which did not leave me with a choice; I had to find a place to empty my bladder or I would do it right in the car. This situation made me quite angry, since I wanted to avoid urinating into our rental car.

I grumpily told my husband he had to get off the highway and find me some restrooms right away. On the left side of the street, I saw a building that looked like a gas station. I shouted at Markus, “Go over there! Now!” Markus looked around. We were still on the very right side of the street. “How do you think I will get over there?” he asked me. I responded, “I don’t care, but I really must go now!”

Markus somehow managed to change to the left within a few feet, and I could get out the car. Without realizing what area we had been in, I ran into the gas station, which did not look very inviting. Five scary-looking guys stared at me. In very broken English I said, “I have to pee very urgently. May I please use your restrooms?” Flabbergasted, one of the guys showed me their bathroom. Today, I do not remember much of the bathroom or the gas station; I was only happy to have found them in time.

Markus later told me he was a little concerned about my safety, whereas I think I looked way too desperate for someone to want to hurt me. The men in the gas station I remember as friendly and helpful, but in that moment it did not matter anyway.

I did not realize until later that this situation must have been even more stressful for my husband than for me. My uncontrollable bladder function covered any other thoughts.

I finally start to realize how self-centered my chronic condition sometimes makes me. In New York I only thought about my own problems. What this did to my husband, I am beginning to notice now. 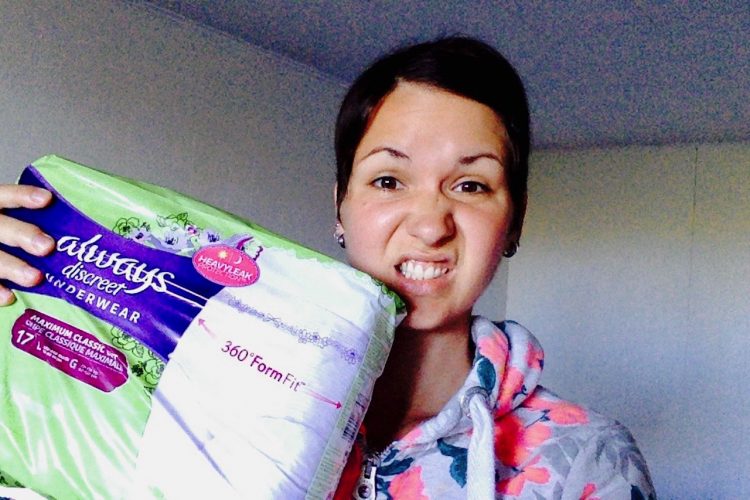 Suddenly I have to laugh too. Those diapers are like a present for my husband. He actually thinks I will use them from now on for every car ride, which would make the drive much more comfortable for him.

I often forget how my symptoms affect my husband in various situations as well. While I try to organize our whole trip perfectly and plan our route based on the locations of restrooms, he is under similar pressure, because he wants to get us to our destination safely and at the same time has to master several difficult situations.

And this is how it happens that a husband buys his wife diapers on Amazon, while smiling as happily as he would if he got to choose her underwear.