I think I’ve always been an anxious person. Always seeking the approval of others, worrying and overanalyzing everything. Going the extra mile to please everyone and apologizing for everything — even when it wasn’t my fault. So many thoughts and questions with no safe answers to give me peace of mind. I wanted to seek help but I was scared of what others might think. I didn’t want to be seen as weak and helpless.

Instead, I struggled silently with anxiety and managed to control it. When it came time for a “me time” break to regain my focus and thoughts, I took one. It helped me regain control before having an anxiety attack. It also prevented me from hurting others because of my insecurities. Trying to self-manage my anxiety, I thought one day it would go away. I had no idea I was creating my own internal bomb that would go off harder than I ever thought possible.

Years later, after getting some chronic illnesses and chronic pain added to my life, it felt like living an internal life of chaos. I was working twice as hard not to fall apart. I felt guilty for getting sick, for feeling lost and alone, for feeling like a failure in all my relationships — especially as a mom. I made so many more apologies because I’m not the same person I once was. My list of insecurities got longer and heavier to manage alone. My biggest fear of being seen as weak and helpless was suddenly visible for the world to see.

Doing everything possible to take care of myself physically to get better, I stopped controlling my anxiety. I forgot about the “me time” breaks. I continued to believe I could handle it and once I was all better, everything else would be too.

What I failed to understand and accept is anxiety is a symptom on it’s own and increases greatly as a symptom of my chronic illness, pain and medications. It also brings friends — stress and depression. Despite the internal chaos I was living, I still refused to get help or seek support from my family and friends. I was still determined to handle it on my own.

I had labs done before my third surgery and it was brought to my attention that some counts were high which resulted in stress and inflammation. It was either inflammation from the other surgeries that are still healing, inflammation from stress or inflammation from healing and stress. I felt my whole body tense up. I knew it was out of control, but I had no idea how serious it was. Everyone has a breaking point and I found mine. It was a scary thing, feeling so vulnerable admitting I needed help, but I did it.

I felt like a coward. For fear of what others might think, I did not seek help. Don’t make the same mistake. Be honest with yourself try not to worry what others will think. It’s your life and only you can help yourself. 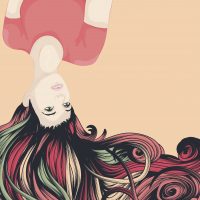