How Getting a Skull Tattoo Helped Me Accept My Illness

If you Google “what do skull tattoos mean?,” the first thing that will pop up is that they could symbolize a person accepting their own mortality. And I guess that’s what I did.

The summer before I got my first tattoo, I got sick. At 20 years old, I was so sick that there were times I couldn’t get up the stairs by myself. It took about 15 different specialists and countless tests to finally diagnose me with chronic Lyme disease. It can be a difficult disease to understand, so I’ll try to keep it simple. If you’re bitten by a tick and the wound is not treated with at least a month’s dose of antibiotics (usually Doxycycline), the bacteria that causes Lyme disease stays dormant in your body. This means the bacteria is asleep and hiding as it spreads across your body. When triggered, the bacteria causes your body to go haywire, hitting the nervous system, immune system, digestive system, muscular system and more.

For the next school year, I was trying to learn how to cope with my new norm – new diet, different treatment trials, you name it. Finally, I decided to move back home and go to school in Connecticut. Moving back home from Brooklyn took away so much of the stress that triggered the flare-ups, helping my body go into a remission. Summer 2015 was much different than the last. I had some bad pain days, but I felt normal again. And so, after years of debating what tattoo to get first, I knew just what I wanted.

To be honest, I don’t really know how to explain this without getting a little dark.

As I said before, a skull tattoo, according to Google, symbolizes that the person has accepted their own mortality. There were some days before knowing my diagnosis where I was really scared I might die. I was in unexplainable excruciating pain; my body was against me and I didn’t really know what to expect. When looking through skulls, I knew I didn’t want the skull to be so dark or ominous because I had gotten through all the negativity and I was OK. In my search, I found the picture below, and the detail blew me away. It had the delicacy that I wanted and just the right amount of darkness. 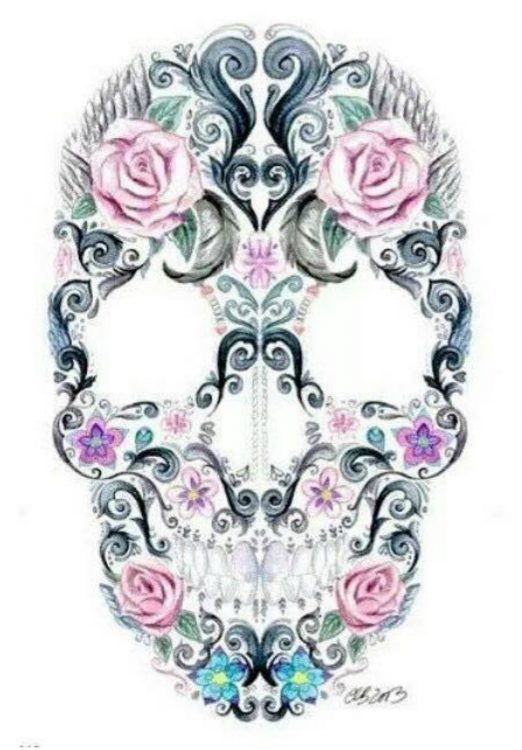 I had the inspiration – now I just needed the artist. I scoured through Instagram portfolios before I landed on an artist I knew could create the look I wanted. I reached out with the picture and she told me she could do it. She just wanted to simplify the details a bit so the ink wouldn’t disperse into a blob over time, considering the size I wanted it.

To make the skull fully represent what I wanted, I decided to change some of the flowers to symbols I felt would complete the piece. The first change was altering the color of the bottom two flowers to keep them a little more in sync with the color scheme of the rest of the skull. Next was changing the two cheekbone flowers into ticks, representing the two little bugs that changed my health. Lastly, the flower in between the eyes was switched out for a cross, symbolic of one of the lessons that was repeated to me over the years – all pain is non-existent after you’re gone. 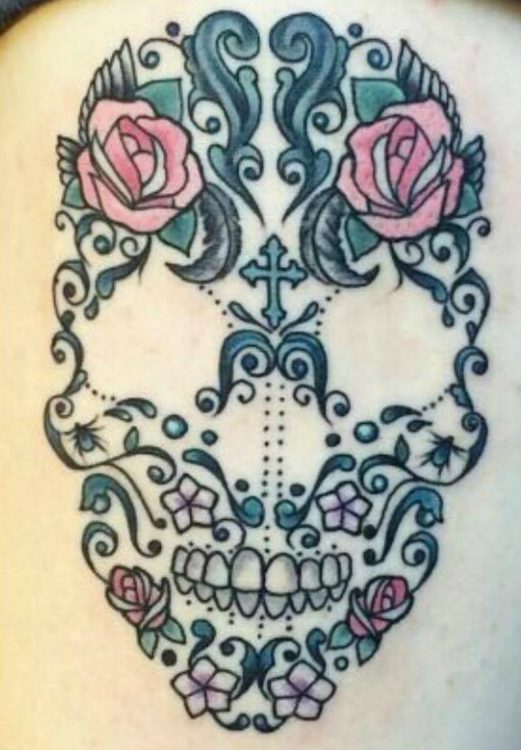 Although I’m not sure what will come in the future regarding my health, the tattoo represents that there will be a time when pain won’t exist for me anymore. I refuse to let my pain keep me from living my life to the very fullest, even if that means waiting my whole life for the pain to be gone.

A tiny person with an overflowing amount of sass. She has an unhealthy obsession with avocados and her EC planner. Lists keep her calm – or in the delusion that she’s getting stuff done – and she’s a New Yorker who couldn’t wait to call another state home. Her dream is to find the perfect gluten-free cinnamon roll.

New Story: 8 Treatment Hacks for People with Migraine and ME/CFS

Hi, my name is Mc17. I'm here because
I’m caring for my 22 year old son with chronic Lyme disease, for the past 11 years #MightyTogether

Going though this journey dealing with chronic Lyme disease for over ten years, (I lost count) and all the doors that’s been shut in my face people saying I’m crazy and the pain it was to see everything around me disappeare your finances, because of medical bills and friends and family cause they just didn’t understand the way I can put it my marriage and my home now that it’s been not taken care of not long after becoming Ill I’m journey been hard I seen some dark dark days but though it all and it wasn’t easy I want all to know I became isolated more or less and won’t go there but it’s ok that time I became closer with God and I had always said from the beginning if this is from God I can deal with it , we’ll I delt with it and with his loving mercy he kept allowing me to see the better things I have ahead of me and gave me the strength to make it one more day I’m grateful for this time with God , he showed me the things I didn’t want to see and the things He wanted me to see , I’m still recovering but I’ll praise him in the storm. Thank you for allowing me to share God bless

2 people are talking about this
Community Voices

Hi, my name is Lotus713. I'm here because I suffer from CIRS and Lyme Disease. I have thyroid, autonomic and auto-immune problems. I also suffer from dementia and parkinson's symptoms on and off daily and have lesions in my brain according to the Neuro Quant MRI I had done, along with loss of dopamine production.Everyday I feel more and more alone and depressed as my loved ones leave me.

Hi, my name is COgirl. I'm here because my daughter was diagnosed with Lyme disease, bringing along with it a slew of psychiatric and neurologic issues that rob her of an normal life. Last hope was IVIG therapy for the small fiber peripheral neuropathy pain. Found out insurance denied us for the third time. Feeling hopeless

2 people are talking about this
Community Voices

Hi, my name is TattooPrincess94. I'm here because I'm suffering from the effects of having Lyme Disease for too long untreated. I am at the point where I am 28 years old, and I can't do normal activities without having to slow down or everything feels like a chore. I can't work and I rarely leave my house. I've been trying to get on disability but it's like pulling teeth. I still live with my parents and dating feels like an added pain. Mostly all of the doctors I've gone to, pretty much think it's all in my head and no one can help me. The kicker is all my test results come back negative. I'm tired of people thinking I'm crazy or just lazy.
#MightyTogether

I’m in a horrible interstitial cystitis (some call it painful bladder syndrome) flare up right now. Day 3 of this horrible horrible pain. My bladder is burning. It hurts to pee. It hurts to not pee. I can feel my bladder and pelvic floor spasming. It’s giving me a stomach ache and a headache. I’m afraid to eat or drink anything besides baking soda water. I’ve been taking azo as often as allowed. All I did was take 3 single sips of a drink my friend for a few days ago and I guess that was enough to do this. I haven’t had a flare up in years. I was supposed to enjoy the 4 days I had off with my boyfriend doing all the fun activities we planned and yet all I did was sleep the days away out of pain! No one understands how mad this makes me, how unfair this is! I finally get to go out with my girlfriends and this is what happens to me. This is why I never want to do anything fun. It’s never worth it in the end. Monday Tuesday and Wednesday spent in severe pain, spent sleeping. I have one day off before I go back to work for two nights. How am I going to survive work when I can’t even handle staying awake at home? I’ve maxed out on call outs this year so I’m screwed. I’m so sick of being sick. When does this end? 😭 #InterstitialCystitis #ChronicPain #Depression #alone #LymeDisease

8 people are talking about this
We use cookies and related technologies to help identify you and your devices, enhance your experience and conduct advertising and analysis. By choosing "Accept", or by using this site, you are agreeing to our use of cookies. You can read more about how The Mighty uses cookies in our Cookie Notice.
Manage Choices
Accept