What It's Like to Not Die From Breast Cancer, Yet

This time last year I was, potentially, dying. (Spoiler: I didn’t!)

Most of us who are alive are always potentially dying, of course, which is why hypochondria and seat belts exist. But when you’re really sick, your narrative shifts. You’re either in a story about how you lived or you’re in one about how you died, and for the majority of the pages you won’t know which kind of story it is.

This is a story about how I did not die, yet.

There’s an accepted communal narrative about how one should behave when one is potentially dying, especially if you’re “too young” for it. You should be strong and cheerful, and the people around you will be appropriately inspired. You should still be sad and vulnerable sometimes, though, because you aren’t a sociopath, or if you are you should try to keep hiding it.

You should talk about how you’re fighting, how you’re not going to give up, how you will be a survivor.

One of the things I learned about cancer, in that first week after I knew I had it, was that nowadays you get to be a cancer survivor whether you actually end up dying or not. The social programs you can participate in are called survivor services; your clinic and treatment information is packaged as a survivor care plan; the tips you get for handling your life during chemo are survivorship skills.

I’m the kind of smartass who generally distrusts anything with a slogan, but I actually liked being indoctrinated as a survivor. It made me feel less like I was embarking on some hellish competition with my fellow patients, in which we would either claim the title or get labelled as runners up if we, y’know, kicked it.

But let me admit something I didn’t really say while I was sick: I’m not a fighter. I didn’t fight my cancer. I didn’t always think I was going to survive. The thing I was actually always thinking was that odds were decent I wouldn’t.

I had a “bad cancer,” if such a label can exist on a scale consisting only of shit that will kill you. Breast cancer in general has a high survivor rate, but young patients usually have the more aggressive types, and mine was a type freely labelled “bad” or “dreaded” all over the internet (thanks, fellow pink-ribbon-sisters).

Death was not just in the room. Death had sidled up next to me, and I decided I would try to attend to what she was saying.

This is not to imply that I wanted to die. I did not, and do not, want to die. But I wasn’t going to fight something that is absolutely, with certainty, going to happen to me one day. I wasn’t going to push away what will be my final experience in this world, whenever it actually occurs.

Something happens when your present story may be the story of how you die. Your plot options narrow in a way that brings a certain clarity. Every day, you are either dying well, or you’re not. That was the yardstick in my hands.

Of course, “dying well” is a subjective yardstick and a sort of bendy one at that. But I wasn’t thinking so much about work, or whether I’m certain I don’t want kids, or if I want to move again, or any of that 30-something stuff. Spending energy on those decisions would have been assuming my survival, and I wasn’t assuming that.

Each day, there was just one decision : What would make this day a day when I was dying well?

It may sound a little depressing, and sometimes it honestly was. But most of the time, it was weirdly calming. Everything had a single point of focus. I paid attention to the things I could immediately control, and the rest fell away.

Here’s another thing I haven’t said before: I miss that focus now that I’m well and Death is not standing quite so close.

While I had cancer, I wasn’t a fighter. It’s now, in the aftermath of survival, that I’m feeling like I have to fight.

Not dying is, obviously, the best thing that’s happened to me since being born. Not dying has been pretty fucking great. But as my life opens up to the possibility of new plot lines, as I start thinking again about parameters that could be changed for the long term, my comforting clarity of purpose has faded. I want to keep living and dying well, but the yardstick has gone from bendy to entirely hypothetical.

One of the other stories we tell about cancer is that it will show you all the strength you didn’t know you had before, and I’ll admit this one is partially true. I no longer worry if I’ll be good in a real crisis, because, shit, I almost died and I was still pretty much my regular self.

Cancer did show me a reserve of strength, of personal resolve, that I had often doubted I contained.

But now that I’m not sick anymore, I worry I’m not nearly as capable at living as I was at potentially dying. All I know is I want to be capable, I want to live in a way that will engage with Life the way I engaged with Death, so when Death and I next hang out we can have a satisfying conversation. I want to arrive at a point of focus for living. And even if Life and Death are sides of the same coin, they’re still facing in opposite directions.

There’s one easy difference I can think of between dying and living. The story of living is a much longer story. Perhaps the only way to find a focus in that story is to follow your obsessions, as if you have all the time in the world — even if you know you don’t. 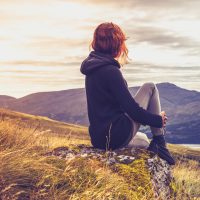