Join the Conversation on Breast Cancer
58.1K people
0 stories
3.2K posts
Note: The hashtags you follow are publicly viewable on your profile; you can change this at any time.
Story
The Mighty Staff
•
Follow
Breast Cancer

Save
What's New in Breast Cancer
All
Stories
Posts
Videos

The other day someone asked me if I get sick of talking about breast cancer. While she is just 14, I really thought it was an intense question. I think people who do not have cancer or any lasting illness do not fully understand just how sick of it we are. Just because you can’t see [...]

What do you find to be the most challenging about a cancer diagnosis?

Getting a cancer diagnosis is many things — heartbreak, anger, pockets of simplicity, grief, even gratitude. But there are parts of it that straight up suck.

What’s been the #1 challenge for you or a loved one?

In need of some good vibes

I was dumb and mopped the house yesterday. Having a rough painful day today. Plus, I’m at the latest breaking point with my chronic pain getting to me. # fibromyalgia #BreastCancer #ChronicFatigueSyndrome #MyalgicEncephalomyelitis #Anxiety #Depression

Yesterday, I had a telehealth appointment with the NIH about my CDH1 gene mutation. The information that I got in those 30 minutes was completely different than what the genetic counselor and surgical oncologist had told me. And now.... I'm at a loss about what to do about my surgery date coming up.

Basically what I've been told was my risk for diffuse gastric cancer was between 56-85%. But what the doctor from the NIH for the clinical study I entered said since my family history of cancers doesn't include stomach cancer, my risk was more like 30%, and instead, my breast cancer risk was more serious. That is a huuuuuuuuge difference. I have scheduled a Total Gastrectomy under the assumption that my stomach cancer risk was the more pressing issue. Getting it done and over with was how I was tackling this. I came to terms with the fact I was going to have major surgery...

But now what? Do I cancel my surgery and hope that the endoscopy I'm getting doesn't show any signs of cancer? Wait a bit later on to do the surgery rather than next month? Or should I go thru with it anyways? What am I supposed to trust: information from the military hospital system or the NIH?

I have no clue. But I have to find one before my surgery date creeps too close. Otherwise, I might be making an unnecessary life-changing decision out of fear that may or may not be accurate.

Part 1 of 2 There certainly are a lot of mental health campaigns going on. There’s one or more in every month. Most of these are “awareness” days, which is a little bit confusing. People who already have the assorted disorders are already aware of them, as are probably their families and perhaps their friends.

When it comes to awareness, though, most non-affected people (or people who don’t realize they are affected) find out about them through TV commercials – during Men’s Health Month, in ads for medications, or from organizations like the Wounded Warriors Project. There may be local events, too, but I haven’t seen any in my area. I don’t even see much of anything on my Facebook timeline, even though my friends list contains a lot of people with mental health concerns. I note that there isn’t a Women’s Mental Health Month, even though most people who receive treatment for mental illnesses are women. (There are many, many special days not related to mental health that I knew nothing of until I started to research this post, such as World Animal Road Accident Awareness Day, Insect Repellent Awareness Day, and even Spider-Man Day.)

Here’s what I did find.

World Bipolar Day (which I had never heard of, despite being bipolar myself)

Tourette Awareness Month (May into June)

International Day of Persons With Disabilities

So, how are people made aware of most of these various disorders? By people wearing different colors of ribbons that correspond to them. The idea, I guess, is to prompt people to ask, “What is that silver ribbon for?” and to be told, “It’s for Borderline Personality Disorder Awareness.” If the person inquires further, it’s a chance to educate them, but most people don’t ask at all or ask only what the color means.

There are only a couple of colored ribbons that everyone knows the meaning of – yellow and pink. The yellow ribbon campaign was started in 1979 to show support for persons held hostage in Iran, but now means support for the Armed Forces. The pink ribbon for the Breast Cancer Awareness campaign started in 1991 and is probably the most successful ribbon awareness symbol there is.

Here are the colors of various ribbons and what #MentalHealth concerns they are intended to promote awareness of.

So now you know what color ribbon to wear and what month to wear it in. I hope that if you do, people will ask about it and allow you to expand on what it means. I don’t expect that, however. Almost no one has ever asked me about my semicolon tattoo for Suicide Prevention and Awareness. (I occasionally get to explain it if I point it out to them.)

Probably the most effective reminders are t-shirts that ident

My Journey through depression

I woke up this morning at 430. I’ve never shared anything like this online but something compelled me to write this and share it. I’ve dealt with anxiety and depression my entire life. I learned how to hate myself deeply. I looked at myself as weak person for my deficiencies. I didn’t really recognize it until my late 20’s and didn’t get help until I hit rock bottom at 33. Rock bottom was using drugs and alcohol to sooth my pain, a bad breakup and watching my mother go through stage 4 breast cancer ( she survived). At that time I was so depressed I couldn’t preform in the bedroom which as a man was a huge blow to my self esteem. I was paranoid of what the women I couldn’t satisfy would think/ say about me. I felt inadequate, worthless and my confidence/ self esteem was nowhere to be found. It was hard for me to look people in the eyes and even myself in the mirror. I was completely numb to the joy of life all I felt was indescribable numbness and pain. I had two really close suicide attempts with a gun. After that I decided to move to a place were guns are harder to obtain and try to start my life over. The depression continued after the move to the point I had to go seek help or I would have ended it. Luckily I’m a veteran and could get affordable/ free mental health help. Unfortunately everyone doesn’t have that option so I am grateful. Therapy isn’t a miracle cure but it helped me learn about my mental health issues and I could start the work to get better. Reluctantly I started medication and it has helped take some of the edge off. I’m still fighting daily. I have a job I like and two dogs that help me out a lot just by being companions. I still slip into the darkness and sometimes it’s still hard to see my way out. I’m lonely and I would love to have a good woman in my life to love but relationships still freak me out but I’m trying to date. It’s hard as hell but I’m still trying. I guess I’m sharing this with the hope someone out there who’s going through it can relate and find some comfort in not being alone. I’m not out of the dark but I’m still fighting and I hope you continue to fight as well!

What advice would you give someone recently diagnosed with cancer?

Being diagnosed with cancer can certainly be scary, confusing, and frustrating — just to name a few of the whirlwind of emotions that may come up.

If you could give any advice or words of wisdom to someone newly diagnosed with cancer, what would you share?

🎧 🎙️ If you're up to it and would like to listen, feel free to check out this Mighty Podcast episode on what it's like living with a rare cancer:
Living With A Rare Cancer 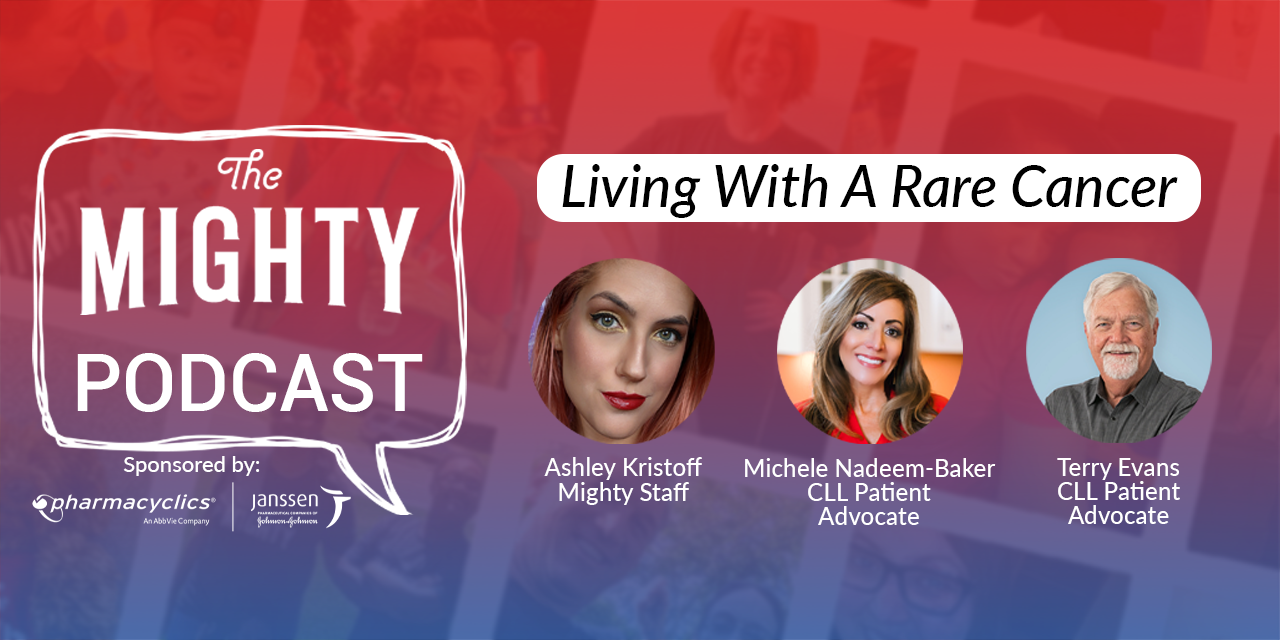 Living With A Rare Cancer

“I get diagnosed with a disease that I’d never heard of and let me tell you, it’s quite a shock to go from zero to 100.” On today’s episode of The Mighty Podcast, join Ashley Kristoff as she talks with Michele and Terry, two people living with chronic lymphocytic leukemia (CLL) who share their experience learning they have blood cancer to becoming active patient advocates.<br /> <br /> Sponsored by Pharmacyclics and Janssen Oncology<br />

Cancer of any type brings with it a transformative experience for everyone it touches. Whether you have just been diagnosed, are going through treatment, or are in remission — our new Mighty group for you.

We warmly welcome caregivers and those who are currently supporting or have lost a loved one to cancer too.

This is a safe space to talk honestly about what you’re going through — the good, the bad, and the just plain ugly. Cancer sucks, but you don’t have to face it alone.

Cancer of any type brings with it a transformative experience for everyone it touches. Whether you have just been diagnosed, are going through treatment, or are in remission — this is the group for you. We warmly welcome caregivers and those who are currently supporting or have lost a loved one to cancer too. This is a safe space to talk honestly about what you’re going through — the good, the bad, and the just plain ugly. Cancer sucks, but you don’t have to face it alone.

Today, I find out if I have cancer. A nurse called me last week to let me know that my mammogram findings were abnormal. “Most such findings are benign (not cancer),” she said, “but it is important that you have additional evaluations as soon as possible. I’ll connect you to scheduling right now.” She was [...]

Bringing awareness to different diseases seems to be a big part of the “community spirit” within the chronic illness and disability communities. My social media is filled with awareness posts all the time as I follow people with all kinds of different illnesses, all of which have their own special months. September is Childhood Cancer [...]