How the Solar Eclipse Affected Me as Someone With Fibromyalgia

While America was gearing up for the eclipse, I braced myself for hell week.

There hasn’t been a visible solar eclipse in the U.S. since 1979. The entire country needed something to celebrate, and so began the great American eclipse countdown.

Americans from all over the country began their trek to find the best place to watch and were ready, minute by minute for where they would get the best view. People ordered their eclipse glasses from Amazon, piled their families into cars and were ready to go!

Being a person with chronic pain, I realized very quickly this would not be the best event of 2017 for us warriors.

We have very keen spidey senses and with such a spectacle of the cosmos, there was no doubt my body would have an extreme reaction to this astronomical gift. Once the moon aligned between the earth and the sun in Chicago, 87 percent of the sun would go dark, as would my feelings about the effects of the eclipse.

Unlike the skies in the midwest, my intuition was perfectly clear – I better gear up for hell week.

In hindsight, my symptoms began on Monday morning. I was overly energetic (an event as rare as the eclipse) and felt like I could conquer the world! But by noon, I was afraid I couldn’t even walk from my office to the bathroom – my body felt a strong, almost magnetic force pulling me to the floor.

By 1:00 p.m., the start of the eclipse in Chicago, my body felt like it was on fire! I could feel a flare coming on full force. By Monday night, I was in head-to-toe pain, even my hair, my skin and my eyeballs. Monday night, painsomnia kicked in and so began the pacing until 1:00 in the morning. Sleep was out of the question.

On Tuesday, extreme exhaustion hit, weighing me down like a mound of sandbags stacked on top of me. Couldn’t I please just stay in bed all day? The thought of taking a shower made sink into my comfy covers even more. To boot, constant nausea was back with a vengeance and I was popping Zofran like tic-tacs.

By Thursday, I couldn’t keep my eyes open at work. I had gotten my B12 shot on the previous Sunday, took an extra vitamin and still felt like the only place I belonged was in my bed.

Only a week before, my husband made a comment on my strength and he noticed how well I had been doing – then wham!! The eclipse hit and launched me out of orbit.

I did some research and found what Georgina Berbari, a writer for the Elite Daily, and Trina Harmon from Medium say about what may have happened to us during the eclipse – the good and the not-so-good.

This is not medically proven, but for many of us spidey spoonies, this was our reality. The best we can do is focus on the gifts of the eclipse and try our best to go with this new flow. Now more than ever, take it easy on yourself. Sending gentle hugs to all. 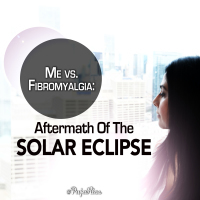