Why I’m Finally Getting Angry at Anorexia

Or if you have experienced emotional abuse, the following post could be potentially triggering. You can contact the Crisis Text Line by texting “START” to 741-741.

1:30 a.m. I’ve taken my night meds and the dog has gone out one last time. I crawl into bed with the TV on low. I can’t sleep without the noise now; the darkness is too quiet and too big. I fear that I will disappear into it. Sleep begins to overtake me and I feel the all too familiar anxiety bubble up. I press two fingers to my neck, checking for a pulse. I count the beats, feeling my heart drum along steadily for 30 seconds. No jumps or skips — that’s good. But it doesn’t quiet the thoughts in my head, the ones telling me that I might still not wake up.

This is what my anorexia looks like: it is the trepidation of doing my morning ritual of weighing myself naked after I’ve used the restroom and ridden myself of excess fluids, aided by the laxatives I took the night before, despite having not eaten anything in hours. It is smiling when I’ve lost weight and hitting myself if I’ve put on even a few ounces. It is buying safety pins at Walmart because everything is baggy now. It is avoiding wearing shorts, partly because I’m always cold and partly because I think my legs are fat and dimpled with cellulite. It looks like shaving off the downy hair that my body has sprouted on my back, stomach and arms in a feeble attempt to keep my core temperature normal. It is mini anxiety attacks in the grocery store as I buy the only food and drinks I allow myself to eat.

It is begging my friends not to worry, because really, I’m fine, my blood tests were normal last week. I have another doctors appointment soon. I’m being referred to a nutritionist. I’m finding a therapist. Please, please don’t worry so much. I don’t want my pain to be their burden. The lighter I get, the heavier the weight on their shoulders is. I don’t tell my mom that I’ve lost more weight since the last time she saw me. I avoid telling her how deep the depression goes. I don’t reveal to anyone how out of control I feel or how scared I am of dying in my sleep. I carry a journal with me at all times — I used to write poetry in it, but now I use it to keep track of my caloric intake.

My eating disorder is what has made me good at pushups and crunches and carrying 50 pound boxes up the two flights of stairs to my apartment. My eating disorder has given me the gift of doing addition, subtraction, multiplication and long division in my head faster than you could enter the numbers into a calculator. It has made me good at lying and deceiving friends and loved ones, at smiling and laughing even though I’m about to faint. It has given me the gift of perseverance and determination, discipline and control.

Stop, I know what you’re thinking. It is not about control. I am so sick of all the experts and television shows and movies and pamphlets in waiting rooms saying that it is always all about control. I feel out of control, right? So I control my caloric intake to feel like I have power over something.

At least in my case.

One thing I learned in the seven years I have been in therapy is that my eating disorder didn’t happen because I needed to control something. I developed anorexia because it made me feel safe. The smaller I was, the less I thought I was noticed. The thinner I was, the easier it became to hide behind corners and door frames and closets. In my father’s house, my very presence was cause for verbal lashings, breaking of chairs, 2 a.m. wake-ups via hands on my shoulders and vodka-scented breath spewing hatred and disappointment. It is so easy to dodge drunken hands grasping for you, or an adult man’s body leaning over you, when you are smaller.

I got out of that house, but my eating disorder followed me into the car — just to make sure I would be alright.

And now here I am, thousands of miles away from all the threats I have known and the anorexia is still guarding me like a watchdog. I want to tell it to go away, to leave me alone — I’m trying to be a better person. I’m tired of being a disappointment, a burden. Can’t it see that it has begun to put me in worse danger than what it was originally protecting me from?

But recovery is not that simple. It’s not as easy as shrugging off the eating disorder that I have had for as long as I can remember in favor of a “healthy” life. Recovery is a fleeting thought on most days, but I have grown to desire it more and more. And it is for this simple reason that may be obvious to you, but has never been the case for me:

I don’t want to die.

I don’t want to look back on my life one day just to see decades of starvation and despair.

And I am finally waking up to the fact that I could die.

But for the first time in nine years, I don’t want to. I want to live. I want more out of life.

I am finally angry at anorexia. I am angry that I have spent the past nine years starving myself to the brink of death, chickening out every time I come close to being stable. I am angry that I could have spent all those years laughing with friends, or putting my all into the dancing I used to do. I could have eaten nine pieces of birthday cake for the nine birthdays I have had my eating disorder — and actually enjoyed them. I could be calling my mother from the nation’s capital with a light tone and a real laugh instead of telling her how bad the depression is getting. I could be less self-centered and ask my friends how they are doing instead of our conversations always being about my illness. I could be dating a nice boy or a sweet girl and maybe even fall in love with them instead of recoiling at the first hint of emotional intimacy in the relationship.

Today, I have hope that I will be able to do all those things and more. As I write this, I have faith that I will be strong enough to recover. But like my desire for a new way of life, this hope is dull on most days. However, I am learning that just because recovery from an eating disorder is not a straight line, that doesn’t mean that it has to end. My eating disorder taught me perseverance, and I think that the ultimate way to get back at it after all the years of hell it has put me through is to use that gift to beat it.

Share
or  Copy Link
Link copied to clipboard.
Be first
26 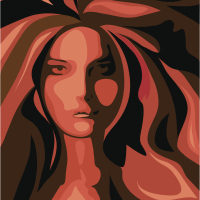