I was at a Rolling Stones concert when I discovered the first one. A hair. On my chin. What the fuck is this? I spent the rest of the concert performing my own moves like Jagger, trying to get this thing off my face. How did this happen? I was 14. And a girl. My male friends didn’t even have hair on their chins.

I yanked it, and it grew back, like a hairy Sisyphus. More appeared, but I was far from joining the circus just yet. I was mortified that someone might notice, but I dealt with it, and kept the secret shame hidden.

Then things got serious. I stopped getting my period for months at a time. I rode it out for a bit because, well, it was awesome, but eventually I had to accept that it wasn’t normal and I needed to check it out.

The doctor sent me for blood tests and an ultrasound. As I lay on the table, trying not to pee, feeling the gooey gel being slid all around my abdomen, I cried. I was sure it would show I was infertile and that I would never be doing this activity with a baby on that screen.

All I ever wanted in life was to be a mother. When I was a child, I used to put a baby doll in a laundry basket at the foot of my bed and wish for it to become real. At 16, without even a boyfriend, I was facing the possibility of infertility and it was breath-stopping.

The doctor rushed through the follow-up so fast she didn’t even have me sit down. “It’s PCOS, polycystic ovary syndrome. Take these birth control pills.” She started to walk out.

“Wait, what does that mean?” It meant that my body produces too much male hormone, hence the stray hairs and lack of a cycle. “Does this mean I can’t get pregnant?”

She looked at me dismissively. “No, you can, you might have a little trouble getting an egg.” Then left. It was a huge relief. The pills worked, my cycle returned, and I kept myself in the dark thinking it just might take a few tries to get pregnant.

When I was 16, PCOS was not widely understood, nor very accessible with lack of the internet. This had all changed by the time I hit 20. By then I knew that infertility is a real concern for women with PCOS, and that “having a bit trouble getting an egg” actually meant potentially years of fertility treatments. Kate Gosselin has PCOS. I was worried that if I did eventually conceive, I might have sextuplets.

I started preparing myself for the very real possibility that I would only have children through adoption. I bought every children’s picture book on adoption I could find, to read to my future children, and to help me try and accept this as an inevitability.

When I started dating my now husband, I told him I might have trouble conceiving. He didn’t seem too concerned, which was annoying. This was serious.

I joined “Trying to Conceive” groups, PCOS groups, anything that might help. I bought fertility books. I booked an appointment with an endocrinologist to discuss some of the drugs I had heard worked well for PCOS.

I considered it a fluke, but five years later, after two months of trying, I was pregnant again. I don’t know how I managed to be so lucky. I have friends with PCOS who were not. My fears at 16 melted away with the births of my boys. But I was not in the clear.

PCOS is a bitch. Infertility and the odd chin hair are not the only havoc it wreaks. I was lucky to avoid the chronic acne and ovarian cysts (so far), but I did get the rapid weight gain, and difficulty losing weight.

PCOS can cause insulin resistance, increasing the chances of developing diabetes. The excess male hormones increase a woman’s chance of heart disease. Add to that all the things that come with the tendency for women with PCOS to be overweight, and it’s a scary diagnosis.

But it can be managed. There are medications that can control symptoms and help promote fertility without the use of in vitro fertilization. Losing weight, if you can manage to do it, really does make a difference. Having a baby can also put it into remission for a while.

My boys are proof that pregnancy can happen, and tweezers are a good investment. If you are reading this and think you may have PCOS, talk to your doctor. There is help available.

And to my soul cysters, keep speaking out. This condition is often hushed because of the stigma attached to having extra male hormones and hair. Screw the stigma, let’s talk about it.

Jagger is still strutting. The last 23 years haven’t slowed him down. And I’m just getting started. 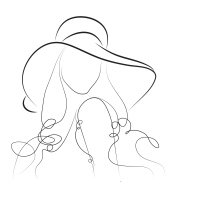