Why My Eating Disorder Symptoms Presented as OCD

When I first started getting treatment for my eating disorder, at 17 and in my senior year of high school, I wasn’t exactly ready for treatment. By this I mean I had identified I had a problem, I acknowledged this problem was making my life a living hell and I wanted it to go away, but I was not completely ready to give my eating disorder up.

So the first time I sought treatment, I found myself a therapist who was not an eating disorder expert. But she was well-versed in was symptoms and treatment for obsessive-compulsive disorder (OCD). She told me, off the bat, that her dissertation and most of her clinical training was on OCD. I was so desperate to find a therapist that I could afford that I settled for her despite knowing she probably wouldn’t be right for me.

My eating disorder was founded on obsessions and compulsions.

For those who have had an eating disorder, or who have known anyone who has had one, this may not come as a shock. The shock, rather, is that someone can be so consumed with certain obsessions and compulsions and still not have OCD.

I learned this firsthand when my therapist, acknowledging the obsessive-compulsive tendencies of my eating disorder, gave me a couple of OCD tests. I had insisted I did not have OCD (as I had been tested for various psychological disorders when I was young), so I was not surprised when the tests came back confirming I did not have OCD.

The significant part of this story, for me, was that my eating disorder symptoms had disguised themselves as OCD to someone who had studied OCD thoroughly for her PhD.

My obsessions with fat, food, exercise, health, my body and my compulsions to rigidly exercise and eat on a schedule, limit my food intake and weigh myself almost daily — all of these symptoms seem to fit OCD perfectly.

So why wasn’t I diagnosed with OCD?

The DSM-5 offers a caveat. OCD is only diagnosable as such if, “The disturbance is not better explained by the symptoms of another mental disorder.”

Mental health is not linear. I’m sure you have heard that before in reference to treatment for mental health. But I’m talking about the mental health disorders themselves.

Co-morbidity, commonly known jargon to people familiar with psychological terminology, is the idea that some mental health disorders tend to coexist with one another.

I want to offer up the suggestion that mental health disorders do not only often coexist with one another, their symptoms can overlap, even appearing identical and the only thing that can distinguish them is the inclinations behind them.

I do not have OCD because my obsessions and compulsions are directly inclined by my eating disorder. On the opposite end of the spectrum, if someone with obsessions and compulsions around counting and separating food are not fueled by inclinations spurred by the fear of fat, they are probably more likely to be diagnosed with OCD than an eating disorder.

For whatever reason, our perception of a lack of control in a naturally chaotic world finds different ways to manifest itself within the psyche. As someone who has anxiety, depression and an eating disorder, I can identify how each disorder addresses my sense of a lack of a controlled world in a different way. Why I had to be cursed with a plethora of these control-related mental health disorders, I will never know.

However, acknowledging the similarities between different mental health disorders, how symptoms and causes can overlap and even appear identical in their manifestations, is an important step towards bringing awareness about and comfort in discussing mental health.

Maybe we can find comfort in knowing that, although we may struggle, we struggle as a result of the disjoint between our natural tendencies to seek for answers and the lack of answers in this world. If we do not have to see ourselves as alone, alienated from everyone by our own minds, maybe we can find solace in the sheer unity of humanity. 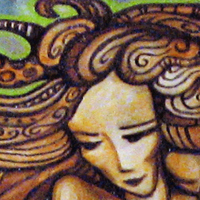