How Zayn Malik Communicates His Needs When He's Struggling With Anxiety

In an exclusive interview with Us Weekly, Zayn Malik, best known as a former member of One Direction, shared the best way he’s learned to communicate his needs when he’s struggling with anxiety: “Being straight up.”

While it can sometimes be hard for people with anxiety to express their needs, communicating about your struggles can let others know how to best support you, and Malik said being honest is what works best for him.

This isn’t the first time the singer has been open about his struggle with anxiety. In his self-titled autobiography released last year, Malik explained anxiety was often the reason he cancelled performances.

“I just couldn’t go through with it. Mentally, the anxiety had won. Physically, I knew I couldn’t function. I would have to pull out,” he wrote.

Since publishing his autobiography, Malik said he was met with more support than he expected. “People that I didn’t expect to speak to me about [my anxiety] spoke to me about it, random people, like older people that had read the book, and they were like ‘I really respect you speaking about that, it takes a lot of strength and a lot of confidence in yourself to be able to just be like this is what it is, this is how it was, this is how I’m feeling.’”

Though not every person who opens up about their mental health struggles is met with a positive reaction, opening up can definitely have its benefits.

In a study examining the effect of seeking help from family or friends for depression, there was evidence to suggest perceived positive support from informal sources is associated with positive recovery, particularly because friends and family may be well placed to point an individual to professional mental health care.

And as Malik has found, opening up often comes with a sense of relief.

“I’m definitely glad I got that off my chest, as anybody is when you feel like you’re keeping something from someone. You have to speak about it and clear up the air.”

Share
or  Copy Link
Link copied to clipboard.
Be first
291 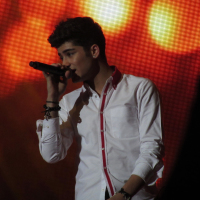