As I am writing this I am currently experiencing a flare up of my Chiari malformation symptoms. The headache, the dizziness and imbalance, the twitching – it has made a vicious reoccurrence, the likes of which I haven’t felt since before my decompression surgery 10 years ago. I am unable to move any sort of distance without tipping over, so this has made me a couch potato for the past five days. The only thing I have any sort of energy to do is to watch TV. So, I decided to binge-watch the first season of the BBC America show “Dirk Gently’s Holistic Detective Agency” (based upon the Douglas Adams books) and was very surprised when one of the (relatively) main characters had an invisible chronic illness. The following paragraphs include minor spoilers for the show, just as a heads up.

“Dirk Gently’s Holistic Detective Agency” is truly a show that defies any sort of logical explanation. It is kooky, weird and a whole lot of fun. Basically, it follows a character named Todd who gets pulled into the titular Dirk Gently’s wacky world of unconventional detection.

Amanda is a young, trim woman who looks just like anyone else – you cannot tell what she struggles with by how she looks. Amanda cannot leave the house – she is entirely dependent on her brother Todd for financial as well as emotional support. Amanda clings to a desperate hope that one day she will be cured, that tomorrow everything will be better.

A few episodes into the show Amanda is approached by some rather unscrupulous characters who happen to have the ability to take away her pain when she is experiencing it. Eventually she decides to join up with these people, giving her a chance to live a pain free, albeit weird life.

As I watched the show I felt a very real connection with her character. I too have a chronic, invisible illness. I too am entirely dependent upon others for financial and emotional support. I too cling to the hope that tomorrow will be a better day, and if I am being honest, I too would find it hard to turn down those unscrupulous characters on days like today.

I give the writers/creators of this show a lot of credit for creating a character who not only has a chronic illness, but also for portraying the terrible aspects of such a life so well. Did they portray everything perfectly? No, but the wonderful thing is that they even thought to create such a character at all. As someone with a chronic illness I often find it hard to relate to most characters on television. None I have watched until now have come close to having a life and living an existence that looks anything like mine.

As I sat on my couch in pain today, I never thought I would watch a show with a character that mirrors that pain and anguish. While it in no way diminished what I am feeling, and none of the terrible symptoms have subsided, watching “Dirk Gently’s Holistic Detective Agency” made me feel less alone, like I was finally being included into the industry. The word “holistic” means that all things are interconnected, that everything adds up to create the whole, and today I feel a little more like I am part of that whole.

I hope more television shows and movies decide to portray chronic illness, that my life will be portrayed in a realistic way and I will continue to discover these pieces of media that make me feel included. I sit here still in pain, but feeling a little better than I did before. 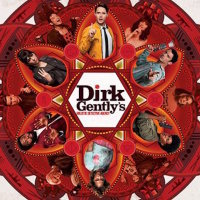