My Son's Scars Are His Story, and It's a Story of Bravery

Please don’t say “that poor baby” when I tell you about my son’s amazing fight. Please don’t gasp and shutter “how awful” when you see his scars.

“Samurai” Jackson was born on October 11, 2012. His birthday is the only easy thing about him.

He was born at our local children’s hospital via a planned C-section. He was born in a room full of doctors and nurses ready to step in at a moment’s notice.

In essence, Jackson has half of a heart.

There is no fix or cure for being born with half a heart. There are only a series of surgeries to re-route the blood flow within the body.  The surgeries are palliative, at best.

Jackson has had his chest cracked open three times.

He’s had a lung biopsy that left a wicked scar.

He had a G-tube surgically inserted into his stomach when he was a month told.

He’s been to the cardiac cath lab four times.

He’s had his nose drilled on three times to open up the side that was closed off from choanal atresia.

He’s on his second set of ear tubes.

At just shy of 5 years old, Jackson has spent the equivalent of eight-plus months in the hospital.

He has home-based therapy four days a week and private duty nursing five days a week so my husband and I can work. He’s in intensive outpatient feeding therapy once a week.

But do you know what else? Jackson goes to a public preschool.

He attends school four days a week at the local deaf and hard-of-hearing classroom. He rides a big yellow school bus there and back every day. He works his butt off in class. He is learning to socialize around kids his own age.

He’s spent his life around doctors and other adults. He knows all of his colors, letters, numbers and animals. He is starting to learn sight words. He can recite entire books from memory.

Wherever we go people stop and watch Jackson walk. He smiles and waves and says “hi” to everyone. Especially the pretty ladies. Total strangers are drawn to him and his gigantic personality. Anyone who meets him is changed for the better.

His eyes draw you in and captivate you.

Jackson has more soul, more heart and more determination in
the tips of his clubbed blue fingertips than any adult I’ve ever met.

These kids are born into a world of surgeries and long hospital stays. When they are sick and the doctors need to take over, they are given narcotics they quickly become addicted to. These children fight every second of every day to stay here on earth with us.

Jackson’s biggest fan is his older brother, Mason. The two of them are silly together. They read books and play catch and snuggle on Mason’s pillow at night. On Saturday mornings, Jackson’s first words are usually to ask, “Where’s brother?”

Their bond is so strong and so special. Jackson absolutely, positively loves his brother.

Jackson’s life hasn’t always been easy. In fact, there are times I look back and it was downright scary. But through it all, he has never known anything but love.

Jackson is too busy living life — on life’s terms — to be bothered with
the oxygen cord that follows him around 24/7.

So please don’t have pity for my son.

Instead, smile and tell me how awesome and amazing and wonderful he is. I don’t feel sorry for him, and neither should you.

All I see when I look at his scars is immense and overwhelming pride. Jackson’s scars are his story. And his story is one of bravery and determination.

Some people never get to meet their hero. I gave birth to mine. 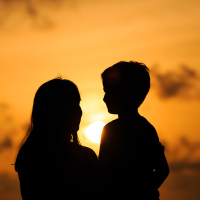