Sometimes You Just Gotta Dance in the Doctor's Office

Sometimes, when you are waiting in doctor’s office, you gotta play some music and give a little dance.

Today. Today was a hard one.

With an undiagnosed kid, doctors appointments can often feel like a spiral — going round and round with discussing new tests and new plans as options slowly become less and less.

Plans that will probably have to be changed two days later.

Tests that are tiring and scary and hope for some answers, but also hope they come back negative because the positive feels too awful.

Today was a day I gave in. I gave in to the feelings of being overwhelmed, to the worries, to the anxiety, to the exhaustion, to the frustration, to the anger, to the sadness.

But my little girl? She didn’t.

She knows this office. Really well. This is the office where we first found out our little girl was not thriving.

This is the office where we have discussed all the scary stuff.

This is the office we have sat in while our pediatrician put his head in his hands in frustration over what to do next for our little girl.

This is the office where tears have been shed and hope has continued to carry on.

She used to come into this office upset. I suppose she was scared, too. Scared of the poking and prodding, scared of a stranger checking her out once again.

But not anymore. Now she comes in acting as if she owns the place.

She knows where the crayons are.

She knows that she loves to climb on the chairs.

She knows she will get fishies and water for a snack.

She knows strangers are going to be walking in and out of that room. And she’s okay with that now.

She greets them with a smile and laughs at their baby jokes. She waves “buh-bye” as they leave.

She’s accepted this is an OK place to be. It’s not so scary after all.

Me? I haven’t quite accepted that yet. I’m working on it.

Because in reality, my baby is right. It’s not so scary. No matter what new problem or possible diagnosis comes out of that office, it doesn’t change the bigger picture.

It doesn’t change this is just a place, just a moment, just a time.

It doesn’t change there is more than just this. So much more.

It doesn’t change there is a hope that is bigger than all of this. No matter how scary the diagnosis may be.

This? This is temporary. This is only for a little while. There is so much more than this.

Today. Today was a hard day. And that’s OK. Because these hard days — they are just for now. And even though they are hard it doesn’t mean they aren’t good.

Because they are. They are so good.

Because they remind us of the hope — the hope we have in the One who makes all things good. Even days like today.

Sometimes you just gotta dance in the doctor’s office.

Share
or  Copy Link
Link copied to clipboard.
Be first
125 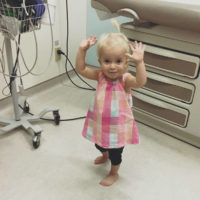