I Could Be a Superhero: Bipolar Disorder and Delusions of Grandeur

I stood at the base of a mountain, its peak hidden from view, as sleet crept under my collar. Giant, wet snowflakes hit my cheek. There was some semblance of clarity that morning, for the first time in days. The clarity engendered a sliver of hope. I began to hope that I may, again, stretch my hand up and into the sky.

The night before, as I lay on the bed on my back, I wrote it on the ceiling with my mind: “Try harder. Try harder and you will make it.” I have tried so hard that I have often crumpled under my own effort. I have tried so hard that, at times, I made myself even sicker. Over the years, I tried to not only break my bipolar disorder as if it were a willful animal, but to somehow control it so that I could still ride the waves of my grandiose childhood dreams.

Before I had no control over the bipolar cycles, when I was in my teens, I used my capacity for trying hard, for working hard, to improve myself. I was like any child who wanted to be a superhero, except I wanted to save humankind with the written word. My words would someday change the world, I thought, if only I tried enough. And so, I trained. I read every classic piece of literature I could get my hands on. I wrote up to four times a day in my journal. I practiced, over and over again.

Of course, these thoughts would later be labeled manic “delusions of grandeur” or grandiose delusions — GDs for short. My GDs were gorgeous, floral, ethereal things and, like acid flashbacks, refuse to be erased. Most children grow out of their desire to be a superhero, because they realize it’s not possible. But for me, it still — at 40 years old — seems possible. Just out of reach, yes, but possible.

In the past few months, and after decades of hiding my writing, I finally decided to share my words with the world. I want to use words to help people — people like me who simply want to survive yet another bipolar day, and those who also occasionally want to be a superhero in their own lives. I want to engender that sliver of hope in them, too, that during their times of clarity, they also can share, and, slowly, carefully reach for the sky.

Although I go to a job every day and take several psychiatric drugs so that I can function and to quiet my secret, seminal desires, I still am occasionally mesmerized by a mountain and the thought that perhaps, one day I could still become a superhero.

Previously published on the author’s blog. 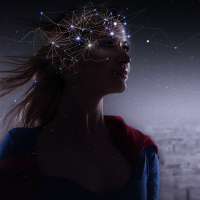