I’m at a manager’s conference for work this week and instead of attending the workshop I’m supposed to be in, I’m in my room laying down. My body can’t keep up with a 12-hour schedule of mostly sitting in hard, straight-backed chairs, so I needed a time out. More problematic than the chairs though is the amount of stairs in this place. It’s wild! Stairs are everywhere, and ramps (often without railings) accompany them but walking up and down inclines is almost as difficult for me as walking up and down steps.

After navigating multiple staircases several times to get into the recreation center I looked for an accessible entrance and came up empty-handed. So I went to the front desk and asked how I could access the rec center without using stairs and this was the best option:

It’s been two days since I wrote the beginning of this post and although my first draft turned into a (justified) rant about the shortfalls of our laws and attitudes towards creating accessible spaces, it’s not what I want to say anymore. (Thank goodness for the delete button.)

Getting around that monstrous building was grueling, but I was so glad to be there anyway. I missed the last two years when I was unable to work and it was such a joy to be back with my people.

Where the physical environment let me down, the social one lifted me up. Literally.

And it felt freeing. Everywhere I went people said they were glad to see me. They asked if I could use help — with getting my food at the buffet, carrying my bags, or a myriad of other things. But they didn’t pester and they didn’t presume incompetence.

It reminded me of a story I heard from my husband when he was studying to be an architect. One of his professors used to live in Venice and he was explaining that although Venice has stairs everywhere, people who used wheelchairs were able to get around quite well because the societal norms were that any and every passerby was expected to step up and help lift a person in a wheelchair up and over stairs. While the city was not physically accessible, it was socially accessible.

I experienced that phenomena this week. I was physically lifted up when I was down. I was supported by arms when there were no railings. I was accompanied by colleagues who slowed their pace to match me. I met a new friend who has also “rocked an eyepatch.” I was fully included and felt fully loved.

I  believe that life is often bittersweet, but although my time away was challenging the aftertaste of this week was not a bitter one. How sweet it is to be valued and respected for who you are, no matter what that entails.

Share
or  Copy Link
Link copied to clipboard.
Be first
20 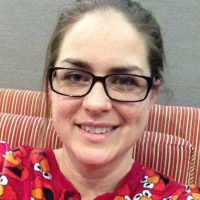