Sometime ago I came across Toby Allen’s artwork, where they had depicted various mental illnesses as monsters, including anxiety, post traumatic stress disorder and depression. I found the designs striking, unique and reflective of the illnesses they were portraying. Their intent for the character designs was to raise awareness and education about mental health and I thought it was a brilliant idea. Of course one artist cannot do every single condition out there, although they have taken on ideas from others for the series, which is an ongoing project. I found that other artists had created their own monsters for their conditions, and thought I would do my own based on fibromyalgia. It isn’t a mental health condition as such, but it is an invisible disability and Toby Allen has already brilliantly covered the various other illnesses I have in my life.

My first attempt at a fibromyalgia monster was a butterfly, since the symbol often used for fibromyalgia is a butterfly, but I gave it large, tattered wings and  made its legs into long, hairy tendrils. The idea was that the monster wrapped its legs and wings around the body of the person, restricting them and weighing them down, and the tendrils would be sore and itchy. It also had spines that would dig into the person’s back on its underbelly and leave them exhausted both physically and mentally by feeding off their energy.

That was over a year ago now and my drawing has improved since then, plus trying to base it off a butterfly as the symbol of fibromyalgia probably lead me to not truly depict how the illness makes me feel. I tried to think instead of a slow, cumbersome creature and I came up with a sloth. That’s nothing against sloths, they often get a bad rap as being lazy; it’s not their fault they’re slow, it’s just the way they are! As a base of my fibromyalgia monster, it just felt perfect.

Obviously this wasn’t going to be one of those adorable critters that hang upside down on tree branches. I think, from my partner’s reaction, I have made it suitably unsettling. The idea this time was to give the monster tendrils instead of the sloth’s usual claws; with these the monster would tether itself to the person and be dragged along by them. This is because fibromyalgia often makes me feel as though I am walking in tar, or something similarly thick and heavy. Certain points are tender, and these would be the parts the monster is gripping onto with his tendrils. The monster’s fur is brown and grey, to make it look mottled, maybe ill and it would be coarse, causing itchiness whenever it brushes by them. Lastly, the monster is tired, which is why it finds people to cart it about in the way it does, as shown by its eye bags, passing on its exhaustion to others. Due to its lack of energy it is irritable, shown by its expression, and often makes inaudible moans and groans, which cause headaches and problems concentrating.

I didn’t create this monster to make fun or light of the condition, but to express how illness makes me feel, which hopefully can help enlighten others as well as help those with the condition deal with it. I would love to see others create their own monsters for whatever conditions they have; it could provide real insight into the different and similar ways we can all feel. 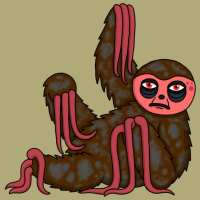