Looking for Clarity After Being in Remission From Testicular Cancer

I’ve made many mistakes in life, but a recent one that sent me on a troubling downspin was yesterday afternoon. I opened my radiology report from my CT scan on the patient portal from my oncologist’s office. Seeing as the June report was very clear in saying, “No pathologically enlarged lymph nodes [and] no metastatic disease,” I figured I could sneak a peek at the report during a grade level meeting (sorry teammates) and move along with my day.

However, these words did not appear anywhere in the report. In fact, it stated one lymph node was 1.3 centimeters in size. In June, all of my nodes were subcentimeter in size. This December report didn’t even mention the June one and only compared it to February, which was a remission scan, too.

I decided to stop checking it and wait until I met with my doctor.

Later that evening, my body must have realized the best thing for me was to go to sleep, as I fell asleep during “Die Hard” around 7:45 p.m. I woke up the next morning, raring to go for my 8:00 a.m. appointment, on the first day of winter break.

I got to the office and checked in with the friendly receptionist team who greeted me every day last year. (Throughout the visit to the office, I also got to see all my old medical team, including my nurse and my pharmacist buddy. They all got ABSOT bracelets.) After being taken into the exam room and having my blood pressure checked (which wasn’t very high, surprisingly), I was told the doctor was coming from the hospital and would be a few minutes late. That was fine, as I needed time to collect myself.

As I waited, I noticed the touch screen billboard in the office said, “Treating cancer doesn’t have to be stressful.” I agree. Treating it wasn’t too stressful. Surviving it is.

Eventually, the doctor came in, clad in a green shirt and red tie. His subtle holiday attire instantly earned more points with me, since I do love this holiday season. The first words out of his mouth were, “The scan looked good. You’re still in remission.”

He must have known I needed to hear that.

I then asked about the 1.3 centimeter node indicated on the report. He pulled up my December, June, February, and November 2016 scans and placed them all side-by-side. Like I’ve always said, I’m not a doctor, so I didn’t quite get what I was looking at, but he did a good job showing and explaining it to me.

The 1.3 centimeter node from my December scan did appear to be larger than it was in June. Interestingly enough, and I hope I understood this correctly, my original affected area was along the right side of my body and this node appeared to be on my left (or vice versa).

I asked him what that meant and he sent a message directly to the radiologist who read the report for further clarification. That’s the mark of a good doctor in my opinion. He didn’t say he would do it later; he physically pulled out his phone and did it right then and there. Hopefully it’s nothing, and I should have more answers in a week.

He did maintain I can still be considered as in remission, but we’ll keep an eye on this particular node. My next scan will be in June, as I’m on a six-month scan rotation for the next few years. Six months is a long way off, and I really hope that node doesn’t continue to increase in size in that time.

The results of the scan was only one of the main reasons I was anxiously awaiting the meeting. While my physical healing has more or less completed ended, my emotional healing still has a long way to go.

Ever since the “Stranger Things” episode and all the recent anniversaries of the beginnings of my cancer journey, I’ve felt a darkness creeping up on me. I know this darkness well, as it’s not the first time this has happened in my life. I’ve mentioned it in a few posts, but I suffered from severe clinical depression in high school. The extent was pretty brutal, but I ignored the signs and let it progress to a stage I wish I hadn’t.

Recently, I realized I was experiencing many of those same feelings now:

Irritability and random outbursts of anger.

Loss of interest in activities.

And many more signs that have come and gone throughout the past few months. Since I am almost 10 years older than I was in high school (holy cow I feel old typing that), I realized the warnings and knew I didn’t want to get to the point I was at when I was a teenager.

Some people are into positive thinking, holistic medicine, healing crystals, exercise (or shopping), or whatever else seems to be the flavor of the week as therapy. I go to the gym regularly, and I do find that helps, but I can’t live in the gym 24/7. I tried traditional therapy in the spring, to no real effect. The eTC program helped while I was in the course, but I needed something more. I try to maintain a positive outlook, but staring your mortality in the face derails that slightly. Writing is an outlet for me, but it’s not enough alone.

So I asked the doctor for antidepressants.

I’m not beneath asking for help, and this is the help I need. I know from previous experience I respond well to these medicines and they help balance me. On my drive home, I asked myself, “Is taking these pills a cop out?” Honestly, I didn’t have an answer at the time.

A few hours later, I was doing a Facebook Live video with Nora McMahon of Cancer Grad, and I found my answer: It’s not a cop out. The pills are not going to be the only way I find happiness. Writing helps me process. The gym keeps me healthy, inside and out. These pills will just be another tool in my toolbox for helping me to maintain a positive outlook, which is something I have struggled with since the end of chemo.

I hope by sharing that I’m going on antidepressants, others will find it’s OK to ask for this type of help. I compare it to needing chemo for cancer or a cast for a broken arm. You wouldn’t say no to either of those, but why are people hesitant to try medication for mental health? In my opinion, it is foolish to be in pain due to the stigma that if you need medicine to help be happy, something is wrong with you.

I’m not broken. I’m not weak. I’m not a lesser person for taking these.

If I’ve ever felt brave along this journey, it’s now. I’m asking for help and advocating for my own needs. It’s a step in the right direction to putting me back onto a path of happiness. 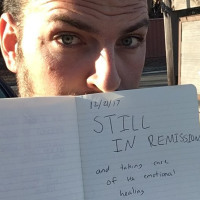