There were two animated movies, released pretty closely together, which center around babies in one way or another: Storks and Boss Baby.

On the surface, they are silly, playful, and somewhat irreverent stories around the cuteness and silliness of babies. But for parents like us, there is a darkness in the reminder that not everything has a happy ending.

My wife and I have a daughter. We would like to have another child, but we can’t. Pretty much since Namine was born, we’ve been on a roller coaster ride of doctors telling us “yes you can,” “no you can’t” for a myriad of reasons. And now, more than eight years later, we are met with what seems to be the final answer:

“You will never be able to have another child.”

But in the midst of this darkness which lives in us, life goes on. It may seem like a trite and perhaps heartless thing to say, but nothing stops the sadness, misery or depression. Jobs don’t wait, friends don’t wait and family doesn’t wait.

It’s not completely fair to say friends or (depending on circumstances) work won’t wait at all. But in the interest of speaking the truth from personal experience, they won’t wait for long. Sooner or later — it might seem like sooner to you, but later to them — they will expect you to move on. Even members of your own family might ask, “Haven’t you taken long enough? Isn’t it time you moved on with your life?”

Moved on from what? Heartbreak? Depression? No. There is no moving on. These things which have happened to us have become a part of our life. This has become part of who we are.

As it so often is with children’s movies, everything turns out all right in the end. All hope is not lost; the baby is saved. The parents, who have been sad for their lost baby, receive their bundle of joy. The sibling who did not want the new baby discovers (spoiler) he loves him, after all.

But in the real world, in real life, everything does not always turn out all right. The larger family Jessica and I might have had? It has been denied to us, and it hurts. It’s not just sadness, it never ends, and it won’t go away. It’s painful. There is no resolution, no happy ending.

It’s easy to think, I am the only one who feels this way. But it would be wrong. It would be easy — far easier than to talk or write about these hurtful emotions — to shut them up, pretend they don’t exist. It’s easy to be selfish, to focus on me and ignore my wife’s pain. But the best thing we can do is talk to each other. It still hurts, that never goes away, but open communication has enabled us to share our pain.

“Share our pain.” That phrase makes me pause, because it sounds like it’s the worst thing I could do. As the husband, shouldn’t I shoulder it alone, without lament or complaint? I used to think that. It’s taken me a long time — longer than it should have — to realize what should have been obvious from the day I married my best friend: we are stronger
together, and together, we can weather anything.

The subject of children — and our inability to have any more — still hurts. Some days are worse than others. But conversely, some days are better than others. What’s important is we don’t keep it bottled up; we talk to each other. Sometimes, that’s all you can do. 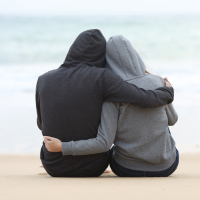