What I'm Thankful for After a Difficult Year With Lyme Disease

Everyone has certain years of their life that are more memorable than others, for whatever reason. 2017 has been one of those years for me. Since beginning the new year, I have frequently reflected on the events in my life that occurred in 2017. For me, 2017 had been one of those chaotic years I would have never been prepared for no matter what. 2017 had been hectic mostly due to my Lyme disease journey and the twists and turns it has taken. However, my Lyme disease journey has not been entirely bleak; some of the results of the situation have been positive.

Since being diagnosed with Lyme disease at the beginning of 2017, I have spent a lot of time evaluating my life and determining whether I am content with how I am living it. One of the outcomes of examining my life is that I have become more thankful for certain things in life, especially the little things. I knew that being grateful and appreciative was one of the keys to a happier life and since my diagnosis, I have been unsure about which direction this disease will take, so I want to spend the rest of my time enjoying my life as much as possible. My experiences in 2017 have made me thankful for the following:

1. I’m thankful for my diagnosis of Lyme disease.

A diagnosis of Lyme disease may sound like a peculiar thing to be grateful for, but I was appreciative of any diagnosis I could receive after going undiagnosed with a mysterious chronic illness for two years. Even as a child, I had unexplained illnesses and medical complications, so I had probably had Lyme disease my entire life. Therefore, after experiencing symptoms for so long, I was glad that the illness causing my symptoms finally had a name. I was especially thankful for the diagnosis during the rapid decline in my health I experienced this year. It would have been terrifying enduring a rapid decline in health and not knowing the cause of it.

The year 2017 has truly made me realize what generous, caring people I have in my life. I don’t know what I would’ve done this year without the people who have reached out to me, prayed for me and have helped my family and I cope with this disease. I’m grateful for my family, especially. My mother has taken time out of her day to go to a plethora of doctor appointments. Both of my parents have taken turns spending the night in the hospital with me by my bedside. My brother has had to hold me down numerous times while I have tremors or a seizure so I don’t accidentally injure myself. I am certain I would not have survived the year without them and I could not be more thankful for their support and assistance. Sometimes I feel like a burden to my family and I feel guilty they have to experience Lyme disease with me, even though it is beyond my control. However, I appreciate you all more than you will ever know and I am forever in debt to you.

3. I am thankful for the ability to walk.

At the beginning of 2017, I started to experience overwhelming muscle fatigue in my legs – making it a struggle to walk. With the help of a neurologist, I discovered I had some muscle deterioration in my legs. Luckily, the muscles in my legs have not deteriorated any further and the fatigue has stayed constant, so I can still walk. Even though walking – especially up flights of stairs – requires a lot of energy, I can still do it and that is something to be thankful for.

4. I am thankful I still have the ability to drive a car.

In May of 2017, I began having hand tremors. These tremors slowly started to occur in other parts of my body like my arms and legs. In September 2017, I began having non-epileptic seizures. In September, I had non-epileptic seizures for four days straight which landed me in the neuroscience wing of a local hospital for two days. I was starting to worry I was going to have to give up many of my freedoms, including driving a car. I did not trust myself driving a car because I did not know when I was going to tremble or seize. I did not want to take the risk of injuring myself or another person. Currently, I have gotten the seizures and tremors under control to the point where I can drive and have not had to give it up yet.

5. I am thankful I am still able to go to school.

Due to the non-epileptic seizures and tremors I was experiencing, I did not believe I was going to be able to function well enough to attend college, at least for this past semester. I remember trying to attend school again after being absent for a week and I was unable to keep my head from shaking back and forth as I was walking through my university’s campus. As much as it pained me to admit it, I knew I would be unable to attend school and be successful in such a condition. I was in the process of withdrawing from my university when my condition slightly improved – to the point where I would be able to attend school. I was still enduring many seizures and tremors, but they were more manageable and would not severely interfere with my schoolwork. I am so thankful to still be able to go to school and continue to work towards obtaining my degree. My involvement with my academics is such an essential part of my being and I am uncertain how I would have reacted if it was taken away from me. I would more than likely have felt incredibly lost and I would be unsure about which direction I would want my life to go next.

The Lyme disease journey I began in 2017 has taught me many valuable lessons. The experiences I had that year have proved to me that nothing should be taken for granted and if there is something you want to do during your lifetime, do it now without any reservations. Our lives are short and we do not deserve to spend them restricting ourselves due to fear or fatigue. I am eager to see what 2018 has in store for my Lyme disease journey and I hope to continue to heal.

Photo via bob_bosewell on Getty Images 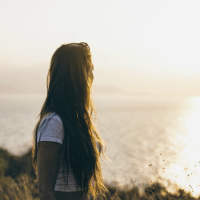