What Made Me Finally Seek Treatment for My Anxiety

I was driving my 2-year-old daughter to her new daycare when my chest seized up, my breathing became rapid and shallow, and I was certain I might pass out. We had moved to a new town and having to face her new teachers was just one more thing I had to deal with. I had invested mountains of my limited energy to cultivate relationships with the multitude of staff at her previous school. So many of them had been outgoing, calling out goodbyes to us as we headed out the door. Initially, it had been an affront on my introverted, nervous ways. But over time, I grew to like it. It became a comfort. And each day, I marveled at how my young child basked in the attention, far too innocent to understand mommy’s overreaction to simple human interactions.

Now we had to start over. I had to learn about the new children in her classroom and navigate the awkward encounters with their parents. Watching those who already knew each other chat and giggle as if they were telling secrets always pushed me even further to the fringes of my anxiety.

I had to trust her new teachers, who outwardly seemed so kind and capable, yet remained strange and foreign to my nervous thoughts. While others use conversation to steer their way through new environments, my usual bounty of words ran dry.

This situation — new daycare, new teachers, new classmates, new parents — was only one facet in my life. We lived in a new city, had new neighbors, a new state, new jobs, new grocery stores, new restaurants, new everything. My brain, tapped out on a fear overload, conjured worries and “what-ifs” and negative thoughts such as “I can’t do this” that swirled into a toxic anxiety. It was one that permeated my every day. I was accustomed to my worrywart nature, but even this caused more angst than I could handle at any given moment with the constant string of new things. I felt myself lose my grip on reality, and on my emotions.

During that drive to school, with my daughter sitting quietly in the back, I was left alone with my thoughts. The fast-paced string of worries, which nearly flung me into a panic attack, was the dark moment I needed to realize I had to find a better way. This was my life now and I was not dealing well. Teetering on the edge of a pit filled with anxiety made me understand that even when I thought I could control my lifelong malady, I never really did. I had always relied on my own coping mechanisms, hurting those around me with the emotional outbursts that had nowhere else to go. It took that moment, in that car with my happily naive daughter, for me to realize I could not go on this way. It was a nightmare to live with constant anxiety while watching those around me handle life so well. I wanted to be them. I wanted the peace and calm they exuded. I could not pass along these behaviors to my toddler. She mimicked everything she saw, and as her mother it was my responsibility to limit my maladaptive demeanor. I could no longer treat those I loved the most with a disrespect so unintended and misguided. I was hurting myself, my family and my daughter, and my thought process was far from self-improvement. It was time to change.

The effort is mighty and the progress is — at times — undetectable, but the reward is great. Anxiety is an ingrained part of who I am — I do not remember a day in my life I did not have the worries fluttering around my head. There was no specific time it joined me for the ride, but rather was always a passenger on my bus. When it became the driver I still believed I was in control, until now. Moving forward, as I handle each situation, I have learned to challenge my maladaptive thoughts and practice healthier behaviors. Now, as I navigate life’s events, my hands get less sweaty, my heart beats slower and my precious time is spent in the moment in which I currently am. The constant worries still beg for my attention, pleading for me to ruminate about a conversation I had yesterday or worry that I will not find my way to a new place tomorrow. But now, I have the energy and drive to fight back.

The moment I decided to change my life, I saved myself. And now when I drive my daughter to school, we sing, laugh and talk about how great our day will be. 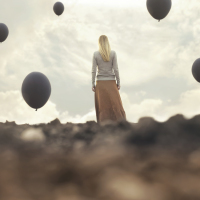