I recently read about a woman with fibromyalgia named Jade Smith who cosplays as a china doll every day. She was featured on “This Morning” yesterday and explained how dressing as a doll helps her deal with her pain. I was shocked that some people chose to respond negatively to a fibro warrior who has found what I believe to be a beautiful, artistic way to cope with her pain.

Dressing like a doll helps Jade to cope with chronic pain, 'It makes me feel happy' pic.twitter.com/dbrHn7Y2Xy

For those not in the know, fibromyalgia is a disorder defined by widespread musculoskeletal pain, fatigue, sleep, memory and mood issues. That’s putting it mildly. Fibro means excruciating, torturous pain of different kinds, often accompanied by depression and brain fog. It means a compromised quality
of life.

Most of us are like rudderless ships drifting in the ocean. Our abilities are severely reduced and a lot of us have to wave our dreams goodbye because some things are just not possible for us, especially when the world is already giving us a hard time for having an invisible illness.

In such a cloud of despair and depression, it came as a delight and an inspiration to me to see someone create art to cope up with their pain. I was surprised that some people cast negativity and suspicion on this. Don’t we already go through enough of that?

I know what some people may be thinking. With so much pain, a fibro patient shouldn’t be able to do all this, right? That simply isn’t true. Yes, dressing up is painful and yes it is fatiguing. But it can give us something infinitely precious: The will to keep fighting and keep hoping.

It’s an illness with no cure and mostly not even temporary relief as painkillers don’t work for many of us. We’re pretty much left to our own devices. Others can maybe sympathize but not empathize with the pain we go through.

For many of us, stress is the strongest trigger, so we each try to find something that makes us feel good. This could be anything under the sun like shopping, painting, sleeping, cooking or cosplaying to name a few. Whatever
works. Those are the key words to remember.

So what is cosplay?

It’s a combination of the words “costume” and “play,” a hobby in which cosplayers wear costumes to represent their favorite fictional or non-fictional
character. These characters can originate from books, games, anime, movies,
television series or any other form of story. Creativity often takes a lead to
make interpretations of characters like fusion, genderbent, crossplay and so
much more.

Cosplay is a very special hobby. It’s a fun activity for people who like to get into the shoes of their favorite character. A lesser known fact is that cosplay has emerged as a unique and effective form of therapy. The act of getting into character and escaping the confines of normal life can be very comforting.
Plus, the excitement of making a costume can do wonders to help us with the
depression and confidence issues that we face because of our compromised
lifestyles.

And then there’s the exhilaration of feeling like a celebrity when you get attention and compliments from people. Personally, it was an incredibly delightful feeling for me to be in Wonder Woman’s costume. For a little while I felt like I was her: a strong, powerful woman who achieves great things. What can be more positive than that?

I’m glad someone found a way to cope with the pain and sadness. I think she’s an example and an inspiration for us to set aside people’s expectations and follow what our hearts truly desire. It takes guts and courage to steer away from the norm and I admire her for it.

My message to Jade Smith: Keep shining, girl and ignore the naysayers. You do you! 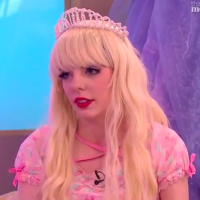