How Meditation Helped Me After a Traumatic Brain Injury

If you told me nine years ago that meditation would become one of my life skills, I would’ve laughed, picturing myself sitting around a campfire taking deep breaths with a bunch of hippies. To my ignorant, young self, that was meditation. I had no idea of the benefits, nor any experience with it. I definitely would have thought a business professional (what I was at the time) did not need meditation in their life. Looking back, had I started practicing it way back then, I probably would’ve excelled even more at my job, been even more efficient and experienced mental clarity that is only achievable with meditation.

During my traumatic brain injury (TBI) recovery, I was fortunate enough to begin a number of outpatient programs at The Center for Head Injuries, an outpatient facility associated with JFK Hospital in Edison, New Jersey. While there, they were rolling out a pilot program for meditation for brain injury survivors. I was desperate to get my life back and willing to try anything, so when it was suggested to me, I willingly signed up. Despite being eager for a new coping technique, I was extremely hesitant to participate in a “kumbaya circle time” with other patients. I don’t know if it was mentioned during the first session, but my fears were definitely addressed with the program and a number participants admitted they had the same hesitation, which lightened the mood. We were educated on what meditation was, how it would mean something different to each of us, and if we found it difficult at first (which was expected) to only practice a few minutes at a time because it would get easier over time. The more we practiced, the better we would get.

The program lasted eight or ten weeks, and we would practice weekly meditation daily, both together and by ourselves. The guided meditation we practiced with was with Jon Kabat-Zinn. We focused on each part of our body, would take breaths to send certain body parts energy and be present with the feelings we had at that given moment. Admittedly, I had no idea what I was doing, but after a few days of practice, I remember experiencing a lift of cloudiness in my brain fog. I started feeling more organized in my brain and a sense of peacefulness during my everyday activities. The more I practiced, the better I got and at the end of the program, I was obsessed. I meditated daily and was feeling much more in control of my life. I was still in pain, still having days I was convinced I was dying and still having migraines, but I was coping better. I stayed present, stopped worrying about every ailment and worked daily on doing what I needed to be better.

I am now nine years from my accident, and I’ve been practicing meditation for the better part of seven years. With the births of each of my children, I practiced mindfulness childbirth to help ease my pain during labor. When my days are overwhelming, loaded with activities and noise, I take a few minutes to myself and meditate. It’s a skill I can take everywhere (even during a panic attack while driving) and it forces me to focus, concentrate on the present and remove the distractions and noise from my anxiety. It helps me sleep better, quietens my thoughts and helps me organize my responsibilities and obligations. I would’ve started it sooner during my concussion recovery, but I had no idea of the benefits until about 18 months after my accident.

My advice to newly-diagnosed concussion, brain injury, stroke and post-concussion patients? Give meditation a chance. Try it from the comforts of your own home or hospital room. There are so many apps out there which you can download (Headspace being one of them) or you can do a quick search on YouTube (search for free meditations). Try it whenever you get a chance. Take it slow and do a few minutes at a time, every day, for at least a month. Don’t give up after your first few sessions. Like everything, meditation takes practice and the more you do it, the better you will get. My hope for you is that you’ll feel an enormous weight lifted off your shoulders after the first few sessions, and it’ll quickly become a life skill you won’t ever forget.

Photo by Natalia Figueredo on Unsplash 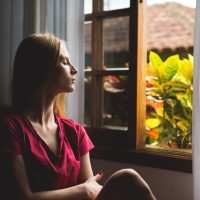