Supporting My Wife After Her Traumatic Brain Injury Changed Our Lives

Editor’s note: Any medical information included is based on a personal experience. For questions or concerns regarding health, please consult a doctor or medical professional.

The five-year anniversary of my wife Shelly’s traumatic brain injury just passed. Her life, and our entire family’s life, was forever changed in a split second on that cold day in January of 2013. We had a freak accident happen within our home. A home-made bottle of ginger ale was taken from the refrigerator to the kitchen sink to be poured out. Shelly was busy and didn’t pour it out right away. As it sat on the counter for a few days, it went from cold to warm, and it slowly fermented. As it fermented, it turned into a bomb. The bomb happened to detonate at the exact moment Shelly walked past it in the kitchen. The force of the blast through the tiny opening of the 2-liter bottle knocked Shelly unconscious to the ground. We estimate that she regained consciousness about 20 minutes later. She was bloody, her face was swollen and there was ginger ale splattered all over the kitchen.

Dazed, she called me immediately. I was at work, running a natural foods store in Jackson Hole, Wyoming. It took me a bit to understand what had happened. She sent me a picture of her face. I was horrified at the sight of her swollen, bloody, black and blue face. We lived in tiny and remote Victor, Idaho. I called neighbors to see if any were home that could take her to the doctor. Everyone I talked to had already made the commute to Jackson Hole for the day. I look back now and realize how foolish I was in not calling an ambulance. But nonetheless, Shelly got herself to the car. The car was covered in ice. It was zero degrees outside. Between scraping the windshield and running the defroster, after several minutes, she was able to see out of a tiny corner of the windshield and she drove the mile to the Victor’s lone health clinic.

The nurse and doctor who saw Shelly were appalled at the sight of her face. They immediately thought she had been a victim of domestic violence. Shelly was able to explain what had happened and the doctor quickly called me. I was on my way to cross the mountainous Teton Pass on the 30-minute drive home to Idaho. The doctor was extremely concerned about both her eye and nose, thinking her nose and eye socket were broken. She told me the nurse would be driving her to the small hospital in the town of Driggs, which was 10 miles north of Victor. I navigated the ice-packed roads to meet Shelly at the hospital. I could not believe how black, blue and swollen Shelly’s face was. The result of the CT scan came quickly. The hospital doctor explained that her nose was broken, but her eye socket was fine. She told us it was fortunate this was the full extent of Shelly’s injuries.

We went home very confused as to how this kind of accident could happen, but also feeling lucky. As we entered the kitchen at home, we saw sticky ginger ale everywhere. I also saw the 2-liter soda bottle lying on the ground, intact. The bottle cap was in the dining room. I cleaned up, Shelly rested and we counted our blessings.

The next day Shelly went back to work. She had recently started a baking business that had really taken off. She shrugged off her injuries and dug into her many baking orders at the nearby commercial kitchen where she rented space. As the days passed, her nose and face hurt, but she was healing up and life was getting back to normal.

Fifteen days after the accident Shelly called me at work to ask me to bring food home for dinner. She started to talk, but couldn’t get the words out. Panic-stricken, I quickly left work and drove home. I called the doctor and told her what had just happened. She told me we needed to see a neurologist right away. The neurologist only visited our remote area twice a month, but she explained that he would be there tomorrow and we should come in. As I rushed into our house, I was greeted by Shelly sitting in the living room. She struggled to talk and could barely walk. I was numb with shock.

That next day we visited the neurologist. He told me Shelly was much like a soldier that was hit by a bomb at war. She had a traumatic brain injury and she would not be getting better. This was our “new normal” and I needed to adjust to it. He said it all in such a matter-of-fact way. This gentleman certainly lacked bedside manner! At one point he asked Shelly why she talked in such an “infantile” way.

From this day forward the true journey began. I quickly realized that there must be better care than this rude, insensitive doctor. Walking and talking had become so difficult, she was having to learn how to do it again. Parts of both her short and long-term memory were gone. I was working for what turned out to be a non-compassionate jerk who did not like that I needed to cut my workload from 70+ hours per week to 55 or so. We had no family nearby. We moved to the Tetons less than two years earlier, so Shelly had not made close friends yet. We were isolated, alone and facing bigger hurdles than anyone could imagine. We had two children who quickly stepped up and helped however they could. Dylan was 17 and Taylor was 12.

The closest large city to us was Salt Lake City, Utah. It was five hours away. I made an appointment at the University of Utah Neurology Department. Shelly was furious with me and did not want to go. She did not realize how severe her situation was and how desperately she needed help. In Utah I learned we were extremely fortunate that Shelly did not lose her life that January day.

I was falling apart. I would cry uncontrollably as I drove to and from work. I was not a stranger to tragedy. My fiancée had been killed over 20 years earlier and now I was driving down the road crying and saying “why me again” and “why Shelly?” But as I walked through the door at work or at home, I tried to appear to have it all together.

I had never considered Shelly a very patient person. But I was becoming amazed at how patient Shelly had become with herself and her situation. I was feeling sorry for her and for myself, but she would have none of that. She started working each and every day toward improvement. Baby steps were being made. Fairly quickly we began to believe Western medicine does not know how to handle traumatic brain injury. Their answer seemed to be to over-medicate every symptom. They had limited answers on how to truly treat the root of the problem.

We also learned Shelly had what was called an “invisible injury.” Her face had healed up nicely, so she looked great! People cannot understand how severely injured a person can actually be when they look great. Friends and family started to think she must be fine, since she looks so good. That was hard, because we needed so much help, but people didn’t understand that at all.

We eased away from “Western medicine” more and more. A couple of local “alternative” medical providers started to do wonders for Shelly. One provider worked on manipulating her central nervous system with the goal of re-wiring her brain cells. The other did amazing work with acupuncture and acupressure. We traveled to Arizona to learn “bio-feedback” treatment we could do from home.

Shelly would constantly experience small milestones such as driving to the corner to pick up Taylor at the bus stop, cooking a simple meal or walking to the mailbox down the street. Shelly kept working so hard and was so aware of each improvement she had made. The milestones gradually became bigger and bigger. We had become so close as a family. Myself, Dylan and Taylor were the only people who truly knew what a courageous battle Shelly was fighting. On the rare occasion we would see friends or family, they would only get a small glimpse of her struggle. It was hard for them to truly understand the magnitude of the battle.

A little over a year and a half ago we moved back to Arizona. I feel like this has been the single best thing for her. Friends, sunshine and familiar surroundings have been amazing for her.

So many areas of her injury have improved. The post-traumatic migraine headaches occur far less often. In my estimation, her motor skills are now 80 percent of what they were prior to her accident. Some areas are still greatly impacted. Her mapping skills are gone. She struggles with any type of multi-tasking. Simple math has become difficult. Areas of both her short and long-term memory are still affected. She spends hours each day doing brain exercises that help her continue to make improvements.

Post-traumatic stress disorder (PTSD) is the biggest repercussion of her injury. The PTSD is still very severe. Her brain remains in constant panic mode. Noises, commotion, sudden and abrupt changes all create complete havoc on her brain. I have become extremely aware of our surroundings at all times. I try to quickly make appropriate adjustments when necessary. She is able to go to Taylor’s varsity basketball and football games, but with earplugs and sitting away from the band and the majority of the crowd. She is able to drive the surface streets in our far western Phoenix suburbs and for a few miles on the freeway when traffic is light. But she certainly cannot drive across town on the interstate. The two worst nights of the year for her are 4th of July and New Year’s Eve, as the fireworks put her in uncontrollable tears and fear. Many things trigger her PTSD, and to see her so quickly in such fear is both helpless and heartbreaking to me. My biggest goal for us is to find the proper treatment to help combat this PTSD “flooding.”

I am Shelly’s caregiver. She can no longer do many things for herself. But being around her every day, I can’t properly express how inspiring she is to me in her courageous daily battle. She deals with the ramifications of her brain injury and PTSD with such positivity and grace. I am in awe of her strength and optimism.

Shelly is truly my hero. 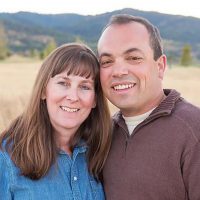