When Invisible Pain Causes You to Question Yourself

We learn at an early age that pain means something is wrong. That pain is indicative of an infection, an injury, or an illness. That it’s something that is fixable with an aspirin, antibiotic, a bandage, a doctor’s visit or a cast. That the doctor could feel the heat radiating from the sprain, see the muscle tear on the MRI, the fracture on the X-ray or diagnose painful strep throat from the swab. We’re told that it hurts now, but it will feel better.

It never occurred to me that pain could be invisible until high school, when I started having what we later discovered were symptoms of fibromyalgia. I had substantial pain radiating from my hips, often going into my legs, back and shoulders. I had blood tests, X-rays, ultrasounds, MRIs and even a nuclear bone scan on my second day of my senior year of high school. I had physical therapy for a whole summer. At various times I was told I had arthritis, rheumatoid arthritis, bursitis and stage three Lyme disease. I was put on a number of different medications. I had cortisone shots in my hips. There were days and weeks where the pain was so debilitating that I could barely walk, and where going up the short flight of stairs in my split-level home was near impossible. And I was in high school.

No medical reason for my pain showed up in any test, nor did I respond to any of the medications. Two separate doctors strongly suggested I get a mental health consult, as the pain might be “in my head,” or maybe I was simply attention-seeking. My mother asked me if I was imagining it more than once as well, and how could she not? There wasn’t any explanation for it at all, and I can’t imagine how expensive all of those tests, medications and appointments were. It must have seemed only reasonable for her to question it.

The thing is, after a while, after test after test says nothing is wrong, after you’ve seen a rheumatologist and a neurologist, and after multiple drugs don’t work, you start to question your own pain. You have moments of confusion and a lack of faith in yourself. Is my pain really there? What if I am imagining it? I remember reassuring myself that it has to be real, has to be real, and there’s no way I could make it up.

All of this came rushing back to me last summer when my allergist questioned my asthma symptoms (which weren’t initially responding to treatment), indicating it could possibly be anxiety. And she did so by e-mail. I went from stunned to enraged in a matter of seconds. Maybe she was doing her due diligence, but it could have been done in a more reasonable manner in the appointment, by asking me about stressors or other questions that might filter out anxiety as a possible cause.

When something hurts I often second guess myself: is it an injury, or is it the fibromyalgia? I question myself because I have to be the first screener. I am my own best council when it comes to my pain, and even I fail at that now and then. I let hip pain go too long, and now it’s a hard-to-treat case of bursitis. I forget that something like Tylenol might help with the bursitis, because I’ve spent nearly 20 years knowing Tylenol won’t help the majority of the pain I feel. I let pelvic pain turn into a bad UTI because it’s difficult to tell the difference between interstitial cystitis and an infection.

We forget and we question ourselves. Pain is inexplicable when it comes to fibromyalgia, or any other chronic condition characterized by pain. It comes from nowhere and is hard to diagnose and treat. Tomorrow I will be having my first conversation about true pain management with my doctor, because I feel like this is something I’ll need in the near future. I think my sleep is getting more and more interrupted by pain, and while she’s been the most incredible doctor I could have had for the last 15 years, she’s a conservative physician and I’m not sure how she’ll respond to this request. She may not even be the right doctor for this part of my fibromyalgia journey.

I have to be the best advocate I can be for myself. If she can’t help, I’ll find someone who can. 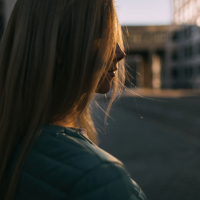