Rosacea: The Skin Condition I Didn't Realize My PTSD Could Cause

A female co-worker had pulled me aside, peered grimly at my face and waited for a response. Pride died quietly inside the caverns of my being.

I continued to work, hoping the subject would drop.

She pushed ahead. “I mean, how long is this going to go on?”

For a moment, I blinked in disbelief. A generous portion of tactless, insensitive gruel had been dropped on my plate.

This woman was unaware of the struggles I faced — antibiotics, gels, creams and endless doctor visits. She assumed a horrendous case of acne was to blame.

It was Rosacea; the manifestation of a deeper, more serious condition… Complex-PTSD.

According to The National Rosacea Society, emotional stress is reported to be one of the most common rosacea triggers.

My psyche had raged against my dermis. I was shocked.

I had managed to hide the emotional turmoil for more than a year. Buried deep inside an internal, seemingly dormant volcano, lava had quite literally bubbled to the surface. Eruption was imminent.

I remained polite, yet tight-lipped, when my co-worker pushed the name and number of her “qualified” dermatologist into my hand. I saved the tears for later.

This was not the first uncomfortable and intrusive encounter involving the state of my skin.

A previous visit with my dry cleaner had left me embarrassed and deflated. The clerk suggested numerous homemade remedies for my imperfect complexion. I wanted clean clothes, not unsolicited medical advice.

Complex-PTSD is an illness that can have numerous physical side effects. While outwardly battling visible symptoms, I secretly fought impalpable demons.

Rosacea caused embarrassment. I felt conspicuous and unsightly, especially when my job brought me into public view. I found it difficult to socialize and concentrate as people indiscreetly stared at the lumps and bumps on my fiery red cheeks.

While my pores continued to burst forth one heinous creation after another, my employer prepared for a company-wide award ceremony.

Annual sales ratios had been calculated. My department head called to inform me I ranked as a “top performer” in the retail division.

Forever the master of disguise, I excelled in the workplace. My personal life was an insufferable closet of secret skeletons.

Sales representatives belonging to this elite category would be honored at dinner party in a function hall. An appointment had been scheduled for a head shot, so my photo could be projected on a jumbo screen while I was presented with an award from the CEO.

To quote Alanis Morissette, “Isn’t it ironic? Don’t you think?”

Raw, red, covered in painful pustules, cysts, blotches and burst veins, I begged to be excused. I was mortified and refused all photographs. I looked like I had gone 10 rounds with a meat grinder.

Although I was allowed to provide my own “pre-rosacea” photograph, the ceremony was obligatory. I showed up, faced my co-workers, gracefully smiled and accepted the award.

Years of denial along with unmanaged, untreated symptoms were finally catching up. Other health problems quickly presented and it became even harder to maintain normal daily routines. Mentally and physically, I struggled to keep up the charade.

A month later, my doctors would not allow me to continue to work.

My face was sore, swollen and painful to touch but the emotional agony of mental illness was comparatively worse.

Eventually, I stopped caring about my appearance. Depression tightened its grip. I was numb to any concern about personal vanity.

I took steps to remedy my skin, but the rigorous undertaking of emotional healing was front and center.

Oftentimes, mental illness is an invisible illness… until it leaches out like infection from a wound. Disguised as other ailments, these maladies are warning signs of deeper, more complicated problems.

The mind/body connection is real. When you are mentally unwell, the physical wiring starts to short circuit.

Today, my rosacea has improved. Seeking mental wellness continues to be a bumpy and treacherous journey, much like an odyssey through a bubbling, cavernous lava field.

Once you accept the disturbance is there, navigating your internal volcano becomes clearer. Magma and ashes are part of the process.  Even after eruptions, the mountain is usually still standing.

And, it helps to have a therapist… I mean a “really good” therapist. 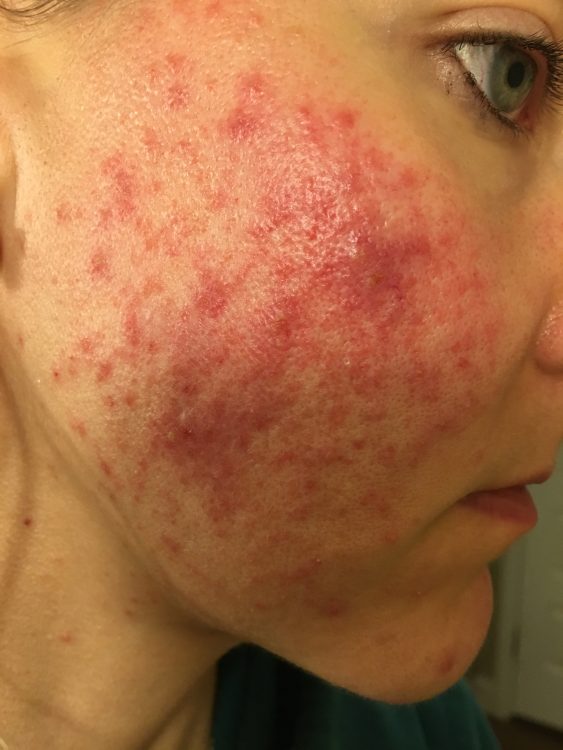 We are all threads in the fabric of life. The unraveling of the smallest gossamer fiber is felt by the universe. We matter. We belong.

MCTD warrior - having it all, but not what you want.

25 people are talking about this
Community Voices

Hi, my name is andrea85_newyork. I'm here because I’ve been battling chronic fatigue for 3 years. I have recurring anemia, IBS, food allergies, insomnia, back pain and rosacea. I’m trying to find people who’d be willing to chat about what’s worked or hasn’t worked for them —- and general just speak to someone who understands what I’m going through :)

What is this thing called "Hope"? #seekingknowledge

What is this thing called hope? Yes, this is a serious question. What frame of reference do you use to explain something to someone who has never know or seen hope? We liken the situation to finding a single Waldo in a swarm of people who all look slightly like Waldo. But none ARE Waldo.

We are, at this point, 47 days into our 2 new Antidepressants, 21 days into our Antipsychotic and no change other than we sleep an added 1 to 2 hours a night. We are grateful for that. Our meds are increased every 2 weeks. I, since none of the other want to attend at this time, do video chat with at least 3 Doctors every week. The all tell me that hope will help us in this wait and see pattern we currently find ourselves stuck within.

We believe that everything in our universe has a counter balance. Night has Day. These are concrete, provable, repeatable facts available to establish what distinguishes Night from Day. Where "Hope" along with, it's 1st cousins the other emotions and "feeling" are all abstract concepts not grounded by facts.

What reference points does one use when trying to describe abstract concept of "hope" to one who has never seen or experienced it in their lifetime. How would you describe colours to a person who has never seen them? We have as little insight into what "hope" or any of the "emotions" are, at this point. What is this thing called "Hope" and where do we find it?

15 people are talking about this

My Sensitive Skin Friends, I Need Your Advice!

42 people are talking about this
Community Voices

I’m new to the Mighty, and wonder if anyone has had experience with losing their job due to missing time for medical appointments? I have GAD, depression, hashimotos, rosacea and Crohn’s. I’ve been trying to get everything under control for the past year, but still struggling to find the right treatment. I was recently let go from my job without knowing why, and am worried that this will happen again when I find another job. I feel like I’m not sick enough to be not working, but not well enough to work full time. Not sure how to handle multiple specialist appointments and testing with a new job, but I can’t not work forever. Any insights would be appreciated. Thanks

So over the last, let’s say 5-10 years especially, my symptoms have worsened.
The fibro pain, the ibsd, the anxiety. things just cycle around... system to system.
I’m always sick. but it’s always different!
My ears will burn and hurt. I have to put a cool compress and it is random. thought rosacea on my cheeks but I never get papules, just redness and burning... my face will be so hot.
I get asthma from certain environmental triggers, sure, mold is a huge one, pollens, grass, animals... but now from certain foods I’ve eaten my whole life.
bell peppers, cinnamon, chocolate, peanut butter, peppers in general.
Bad GERD!
thought it was GERD causing some of the asthma, which it might be... but then found MCAS and people, it was like reading my mother’s story!!!! and so many of my symptoms can be explained.
I go to meet with the specialist in a week. hoping to get some answers!!!

4 people are talking about this

I think it was a very productive day. I did some cleaning, went grocery shopping with my mom, and though we ate very late, we all enjoyed the meal.
At night I spent some time playing board games with my mom and aunt until we went to bed.
It was a good day. Lately, I've been quite relaxed, resting and avoiding stress. I can tell it's working because my face doesn't look so red anymore due to rosacea.
#Anxiety #Depression #Medication #Selfcare

does anyone have a rash like this? I'm undiagnosed and frustrated that it's right on my face...

12 people are talking about this
Community Voices
Jo Hughes @muckerjh

#RheumatoidArthritis
I’ve been treated for RA for a number of years, picking up fibromyalgia, osteoarthritis and rosacea on the way too! Now I’ve been diagnosed with trigeminy as I suffer with palpitation like symptoms. Does anyone else have this too?

Chronic inflammation is a major cause of other illnesses. Both physical and mental illnesses are triggered off by inflammation and often erupt as inflammation levels increase in the body.

Among the illnesses I have dealt with, seasonal asthma, cluster headaches, hay fever, oral ulcers and acid reflux, irritable bowels, constipation, indigestion, eczema (on the body and scalp), rosacea, and depression, anxiety, social anxiety as well as Polycystic ovarian syndrome.

Inflammation for me, has been triggered off by an extremely poor and unhealthy diet, poor lifestyle choices, and a lifetime history of abuse, bullying, harassment, exploitation and abandonment as well as discrimination. A genetic predisposition for it exists as well, with relatives possessing a few of the illnesses I have listed above. PCOS exists in the female members of my family, and anxiety exists as well as cluster headaches, hay fever, oral ulcers, acid reflux, irritable bowels, depression, anxiety, and social anxiety.

Chronic inflammation is treatable and I take responsibility for not having treated it properly before. In this new stage of life, I want to put my health at first priority. In doing so, I pledge to treat my chronic inflammation.

2 people are talking about this
We use cookies and related technologies to help identify you and your devices, enhance your experience and conduct advertising and analysis. By choosing "Accept", or by using this site, you are agreeing to our use of cookies. You can read more about how The Mighty uses cookies in our Cookie Notice.
Manage Choices
Accept