Sometimes the news isn’t as straightforward as it’s made to seem. Erin Migdol, The Mighty’s chronic illness editor, explains what to keep in mind if you see this topic or similar stories in your newsfeed. This is The Mighty Takeaway.

New York Life, the insurance company, found Facebook photos of the North Carolina woman, Cynthia McCullough, going down an inflatable slide, playing Skee-ball and spending time with kids at an arcade. Through surveillance on December 31, 2016, and January 1, 2017, and 15 days in 2017, she was also spotted loading her SUV, driving around to various locations including a doctor’s office, pumping her own gas and driving 50 miles to a church where she has served as a pastor.

Meanwhile, McCullough had told New York Life she couldn’t bathe or dress herself due to complex regional pain syndrome (CRPS) and needed home care. After New York Life told her it was stopping her payments in July 2017, she appealed and said her condition was “severe and debilitating.” Now, New York Life is asking for the $389,500 she received from her insurance policy back.

The story has been picked up by a few media outlets, and the conversation surrounding it reveals how dangerous stories like this can be for others living with invisible illnesses and disabilities.

Could New York Life be correct that McCullough is committing fraud? Absolutely. But it’s important to acknowledge that we do not know McCullough’s side of the story. She told the New York Post “no comment,” when asked for a statement, and there is no other information readily available besides the lawsuit documents. We only have one side of the story, so it’s impossible for readers with no other knowledge of the case or McCullough’s health status to make any kind of judgment.

That might seem like a no-brainer kind of statement, but it means everything when it comes to invisible illnesses like CRPS. You simply cannot always tell just by looking at someone how they are feeling. You can be in incredible pain, but force a smile and push yourself to go about your day anyway. You can also have good days and bad ones. One day, you may not be able to get off the couch. A couple of days later, you’re back at work.

The danger of stories like McCullough’s is that they imply that you can tell how severe someone’s health issues are based on a few photos or a few days of “surveillance.” New York Life used photos of McCullough’s day at an arcade as part of their lawsuit, and news outlets are plastering them in their stories for readers to see. How many people reading this story will now be suspicious of a friend or acquaintance with, for example, fibromyalgia, who shares photos of a day at a theme park — not realizing perhaps this was their only good day that month? How many invisibly-disabled people will be afraid to use their accessible parking pass because someone might see them and think they’re “faking?”

There are people out there who are gaming the system, and McCullough could very well be one of them. However, the danger of publicizing these cases is that they feed into the “disability fraud” stereotype and make it that much harder for those with disabilities to receive the services and support they need. There’s a misconception that people who utilize disability and insurance benefits are “taking advantage” of the system and just trying to “get out of working” or earn “free money.” The reality is that trying to get the proper benefits and treatments you need from your insurance company can be a stressful, exhausting, disappointing process. The more attention we give stories about fraud, the more common it seems, and the more people may think anyone with an invisible disability could be “faking” their illness.

Publicizing these stories also places the disabled person in the uncomfortable position of being judged by strangers on the internet who don’t know their full health story. Indeed, when George Takei shared McCullough’s story on his Facebook page, the comments turned into a series of arguments between people who believe McCullough is “guilty” and others who think she is being unfairly represented. But a person’s disability status or pain level should never be “up for debate” among strangers. These stories make it seem as though it’s acceptable to mull over whether or not someone else is “really disabled.”

Apparently, this needs to be said: It is not up to you to decide “how disabled” someone else is. McCullough’s dispute is between her and New York Life. There’s no reason this needed to be reported, shared on Facebook and opened up to internet commenters.

The next time you see a story like McCullough’s, take a minute to remind others (and yourself) that it’s impossible to understand a person’s disability unless you’ve been in their shoes. People with invisible disabilities face constant scrutiny and judgment (read Mighty contributor Denise Reich’s story I Won’t Apologize for Having Fun While Sick for more insight into what it feels like to have your illness doubted based on one “good day”). They deserve more understanding and compassion, not less.

Whether or not the accusations of fraud in McCullough’s case are true, we shouldn’t let it affect the way we view people with invisible disabilities in our own lives. 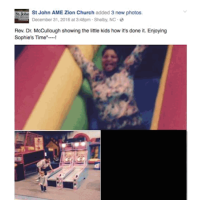