If you have fibromyalgia, you’ve likely heard some comments about your condition that make you think, “Seriously?!” Even though our doctors and loved ones generally have good intentions, sometimes a lack of understanding causes their questions or advice to completely miss the mark. It can be frustrating and hurtful when someone doesn’t really listen or try to understand – and this can unfortunately result in uninformed and insensitive commentary. Sometimes though, the things people say are just so ridiculous (and so far from the truth) that they almost verge on comical.

We asked our Mighty community to share some of the ridiculous things they’ve heard people say about fibromyalgia in the hopes of correcting common misconceptions and raising awareness about the realities of this condition… while maybe having a small chuckle at just how silly and off-the-mark some of these statements are.

“‘Isn’t that when you’re just tired all the time?’ This is pretty self-explanatory. ‘Just tired’ is an understatement to so many symptoms fibromyalgia provides us. I wish there was more awareness for this disease so people know it’s not just fatigue 24/7.” – Alexis G.

2. “You just need to eat healthy and lose weight.”

“Eat completely healthy and lose weight. Even though I’ve been losing weight from not eating because of my nausea and the pain is still there. And I already eat healthy.” — Eloise Taylor

“‘If you get more sleep…’ Most of us with fibromyalgia don’t get good sleep due to being so uncomfortable.” – Tasha E.H.

“I was told that fibro was a fake diagnosis because you couldn’t see it… by a doctor!” – Bay H.

5. “My cousin drank carrot juice and it cured him! You should try that.”

“I had a stranger tell me you could cure fibromyalgia with carrot juice because that’s what his ‘cousin’ did. There’s no easy fix like that.” – Aj R.

6. “I had fibromyalgia once too but it just went away.”

“‘I had fibromyalgia once too but it just went away.’ It’s ridiculous because it doesn’t just go away. They obviously never had it.” – Katrina R.

7. “You don’t know what tired is because you don’t have kids.”

“‘It’s all in your head, it’s not a real thing.’ Yes, because all the doctors I’ve seen just use this diagnosis for fun. (Insert my rolling eyes here.) I wish people could understand the daily struggles that I go through behind closed doors. I put on a brave front, but some days it takes everything I have just to get out of bed.” – Crystal B.

“I’m a ‘hypochondriac’ and all my symptoms are ‘in my head.’ I would like them to understand that fibro has several symptoms that vary in degree and timing.” – Amanda V.

“‘But… you look gorgeous/pretty/too young to be sick.’ Really? It only took an hour, a few breaks, 10 pounds of makeup put on with shaky, weak hands.” – Jen M.

“Things I don’t want to have recommended anymore: essential oils, energy healing, ‘getting over it because it’s psychological,’ effort to improve an already healthy diet, exercise… Even with issues like healthy eating and exercise people assume that what you’re doing is never enough if you’re so unhealthy. Why is that?” – Heather G.

“Burn sage and name the body part that hurt and I would be cured.” – Laura D.

“‘Drink only distilled water, and you will be cured.’” – Renée K.

11. “Fibromyalgia can be easily managed.”

“‘Fibromyalgia can easily be managed, soon everything will go back to normal.’ I wish instead they knew that some days I cannot walk, drive or even brush my hair. Other times I can handle the pain enough to see friends and family with a smile on my face. Also, oftentimes I force myself to show up at social functions resulting in a flare-up lasting a week or more as a punishment.” – Katherine L.

“My mom would say anytime I ate a cookie or something sweet that that’s why I have flare-ups. I agree that it can aggravate it for me personally, but like, one cookie isn’t why I’ve been like this over 10 years.” — Capricia Donoso

“‘You’ll get well if you work out every day…’ That’s somehow a miracle cure according to a girl I met at rehab (she was there because of a broken foot).” – Tina T.R.

“‘Exercise and weight loss will cure you.’” – Amber O.

15. “You can’t have fibro because the pain is really bad.”

“A friend of mine said I couldn’t have fibro because the pain is really bad. Ha! Guess I’m a pretty good actor.” – Betty F.

“I was asked if I was faking my illness because I was able to get out of my wheelchair for a second to have a photo taken! I had to explain how my fatigue and pain worsen if I don’t use my wheelchair and I end up feeling really ill.” – Joanne R.

“‘Well, fibromyalgia is self-imposed, right? If you were just happier, all that would go away.’” – Sheila M.

“If I say a mantra or just ‘think myself better,’ I would get better. I honestly wish it was that simple.” – Sarah W.

“Think positive thoughts and get rid of the negativity – then my pain would go away.” – Debbie M. 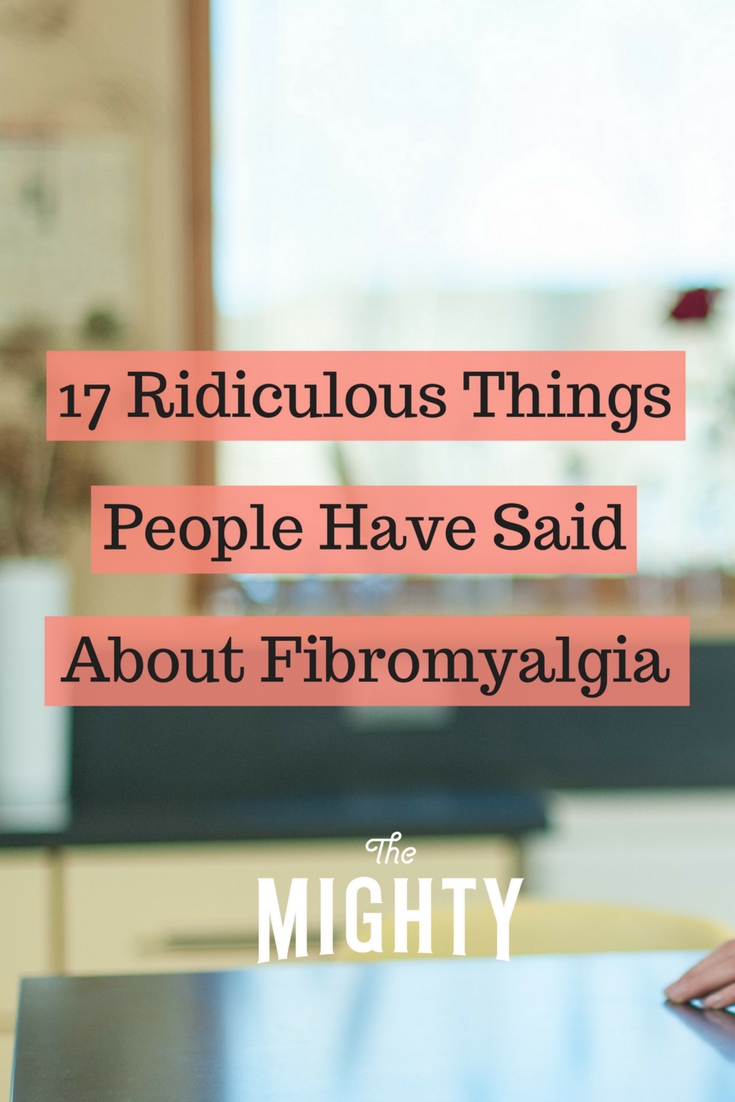