When I Knew More About My Illness Than My Doctors

Just because your general practitioner (GP) has a medical degree does not mean they know more about your illness or your body than you do.

This is something I had to learn the long and hard way. I first went to the doctors in October 2013, after suffering from leg and hip pain for a long time. As I was on the verge of a mental break at the time, they put it down to my depression. They told me it was psychosomatic and that the antidepressants would help relieve the pain. They never did.

I went back, with the new symptom of intense fatigue. They did blood tests and didn’t find anything so they didn’t follow it up. When the pain became too much, I returned again and we did the same dance. They found nothing, and this time they gave me mild painkillers on a short-term basis. None of the meds were working, I knew it was something deeper and the GP wasn’t going to look into it any further. If I wanted help I was going to have to find it myself.

I first came across the term “fibromyalgia” on my first ever Google search of my symptoms. How many years the doctors would’ve saved me of trying a million things that were never going to work if they had taken the initiative to do the same.

After suffering for another year, I plucked up the courage to bring it up to a locum doctor and he agreed it was possible. We ran the tests again and eliminated everything else, so we thought that was most likely what I had. I diagnosed myself years previously, yet was only at the beginning of my diagnosis journey. From here I was to be referred to the rheumatology wait list.

During this time I was in awful pain, I had gone from working full-time, in full-time education and watching over my sister simultaneously, to sick leave – then unemployment. I was deteriorating in front of my own eyes, someone who was fiercely independent and had only herself to rely on. This, on an emotional level, felt like my dignity and pride had been taken – but that was only the beginning. Little did I know that my doctors who denied the very existence of fibromyalgia could make me feel so much worse.

If we could (real quick) fast forward to a few months ago, I received an official diagnoses through the trigger point test given to me by the pain management specialist I had been assigned. Back to a few years previous, I was dealing with two doctors that made me feel completely hysterical, invalidated and ashamed of my illness – things I should never have been made to feel.

The first had the empathy of a brick wall. I had been to see him a few times. This particular time I was so frustrated with my sub standard quality of life. I was 23, had no job and no social life through no fault of my own. I began to fill up. He did not look in my direction the whole appointment, he was so cold. He treated me without compassion or humanity. He proceeded to tell me that some doctors don’t even believe in fibro, as if there was a possibility of the illness being disproved! He made me feel like a liar because I had no physical proof of my pain. He eventually reduced my pain meds, which weren’t even sufficient at their current dose because he feared me becoming addicted. How this is a solution to a severe chronic pain problem, I don’t know. To me it seemed like he was testing my resolve, calling my bluff because he doubted I was ill at all.

During this time I had changed my diet, regulated my sleeping pattern and increased my fluids, all to encourage a pain decrease that did not follow. Feeling like I wasn’t getting anywhere with my assigned GP I sought help in the only other GP in the practice. Being a younger guy, I made the false assumption that his knowledge would be fresher – but he was reading off the same hymn sheet as the other guy. He knew nothing about fibromyalgia, nor anything I could do to decrease my symptoms in any other way but pain killers. Yet, he reduced the painkillers per the request of my assigned GP. I believe there is only one explanation for this – he didn’t believe what I was saying, otherwise it would make no sense to do this without putting another treatment method in place.

I felt completely victimized. I, who hadn’t taken a drug in her life, was being targeted in this way by two men in a position of authority that had gone to their heads. Whether or not a doctor thinks a condition is real or not, they have a duty to follow this up. Instead what followed was negligence to the detriment of my physical and mental health. I couldn’t leave the house anymore or do chores because the painkillers they had prescribed wouldn’t touch the pain I was in and the treatment I received from them made me terrified to go to another doctor again.

During those following months I tried every self-help thing I read about. I removed certain foods from my diet. I tried no sugar, no flour, no dairy. I also tried to go vegan, exercise, and therapy. Nothing worked and the exercise worsened it. We finally decided to move to a different town, which gave us a fresh start. I was terrified to go to a doctor again, but I did. I told him everything I had done to help myself and that I just wanted my life back. He believed me and trusted me with the highest dose of my painkillers, and has been adjusting other meds as we’ve gone.

As there is no one size fits all cure for fibro. It’s been trial and error, but the doctor hasn’t doubted my intentions once. I’ve tried to only take the meds when I need them most, but again that’s such a poor quality of life because without the lull in pain, any physical activity is almost impossible. Now, this doctor doesn’t know much about fibro either, but he believes in it and in me and so that I can work with. This week I’m taking him in pages of my research, referrals I want, new symptoms that have developed and new treatments I want to try.

Not all GPs are not sufficiently trained to deal with invisible illnesses like these. I’ve been through 10+ doctors who knew very little to nothing about my illness alone, which affects so many millions around the world. We need to be our own advocate. If I wasn’t mine, I never would’ve been diagnosed. I would’ve let those men bully me into submission and I never would’ve brought up to a doctor what I thought was wrong with me in the first place. I still wonder if they would have found it on their own, but I’m glad I don’t have to wait. No one knows your body better than you, you’re the one with the greatest motivation to heal yourself. If you’re like me, you’ve spent endless hours of trying to find your own cure through research. Just because your GP has a medical degree does not mean they know more about your illness or your body than you do. Stay strong, stand your ground. Self-advocate. 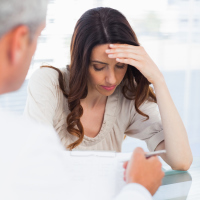