In Los Angeles, it used to be that the best employee health benefits came with jobs in “the industry,” which is how fabulous LA people talk about the entertainment industry. And then, one day, Google, Facebook, Yahoo, YouTube, etc. arrived. Now, Silicon Beach is where the benefits rock. The tech vibe has changed the vibe of Los Angeles. Luckily, I married a “tech geek, so I have access to medical care like a Saudi princess.

I do not talk about my health plan. I feel ashamed even to write this, as I know so many chronically ill people on disability, relying on hard-working family members, or struggling to get by on their own, not able to get the care that they need. It’s totally unfair. I have been there with no insurance. I have paid exorbitantly for high-deductible insurance I never used just to never have a gap in coverage for my condition that existed before I was born. My jaw-dropping medical coverage did not make it easy to get excellent care for my rare, poorly-understood disease. The system is a mess, but that is another story.

Back to my life as an accidental Saudi princess — the Cigna policy I have is the only thing that made it possible for me to try as hard as I could to chase excellent care down. I did with all my might. I try to have instincts like a blood hound and a grip like a pit bull, but that is another story.

With my “luxe” medical benefits came another thrill I had never before had: an advocate within Cigna, Allen Gualarga, totally his real name (kidding). I am not sure what his job title was, as we were never formally introduced. He appeared one day, answering my emails. He helped me sort out my insurance questions and use my policy to get the care I wanted from then on.

Usually, when I am trying to get anywhere with my medical care, the person on the other end of the line just talks loudly at me, listens to nothing and tries to figure out the least they can do to get rid of me. It is exhausting. Not Allen. It was true love, at least on my chronically ill and disabled end, because he actually made an effort to help me.

Allen Gualarga and I never spoke or even Facetimed. Our relationship was purely epistolary, and nary a selfie or even an emoticon was exchanged betwixt us via my Cigna HIPAA secured email account. Yet, I felt very bonded to Allen Gualarga. I was helpless, sick, and in need. He knew an awful lot of personal information about me. He got me answers. He plowed through my policy for me and helped me work it. He would chase down claims that had gotten stuck in the cogs somewhere, fill in the form where I had forgotten. He was my hero. When doctors would grimace over anticipating a fight with Cigna for a preapproval, I would say, “Don’t worry about it. It won’t be a problem. And if it is, I have someone at Cigna who can help.” The doctor would relax, and I could get what I needed from my insurance and the doctor.

Allen Gualarga was doing so much for me, I began to jokingly wondered if we were secretly having an affair. I mean, why else would someone do their job so well? Am I that charming electronically? Am I? At some point, it seemed only appropriate to refer to him as “my boyfriend at Cigna” to everyone except him. Staff at doctor’s offices would stifle giggles, not sure if I was making a joke, or if I was actually having an affair.

When someone else at Cigna would answer one of my emails to Allen Gualarga, my chest would tighten. Did Allen Gualarga get another job? Is he on vacation? Is he ill? I would wonder. I would never ask. I didn’t really want to know. What if he were gone? I couldn’t stand the thought of starting a new relationship. How could I process my grief? Would I have coverage under the Cigna policy for that? He’s not even there for me to ask.

But Allen Gualarga would reappear again and again, so I guess he had been just on vacation or out sick. I never asked. I would tell him I missed him and it was nice to be in touch again. He would continue to answer my emails with his usual professionalism and helpfulness. Right up until the end.

Our “affair” went on for four years. Then, my husband’s giant tech employer switched to another insurer. I wrote to my boyfriend at Cigna:

Dear Allen, the company has switched to Anthem, and I’m still crying about it. Here are my last few claims, my unfinished business with Cigna. I will miss you. Thank you for your kindness and help all of these years. You made a big difference in my life. Is there somewhere I can send you a fruit basket?

Allen Gualarga thanked me kindly, said it was not necessary. But he gave me an address and told me to send it care of his manager. Allen, that’s the city you have been in all this time? I never would have guessed!

It was hard to know to what to get as a gift for someone I know absolutely nothing about.

I thought of something.

Farewell, Allen Gualarga! If you are ever in Los Angeles, I will buy you a drink. 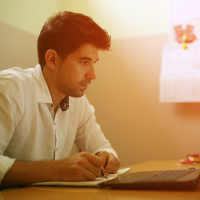