The 'Waiting Game': How My Husband and I Pass the Time in Doctors' Offices

For the year and a half it took me to receive a diagnosis, my husband and I spent a lot of time waiting – in reception areas, in exam rooms, in labs.

There was always a high level of uncertainty and fear at each of those appointments. We didn’t know what we would hear or what it would eventually mean for me and our family which included our then 2-year-old son.

When I first became sick, I was teaching fourth grade. Prior to that, I had spent five years teaching kindergarten. And before that, I worked part-time in a public library while I was in college. So for years I spent a large portion of each day actively using the alphabet, letter-by-letter.

We were in an exam room at UCLA Medical Center, waiting to meet the specialist it had taken months to get an appointment with, when my husband and I began our version of the alphabet game.

Our first topic was food. I sat on the exam table, my husband sat on a chair in the corner, as we took turns trying to think of a food whose name began with each letter of the alphabet.

A. Avocado. Which got us talking about the one and only time we ate pizza topped with avocado. We were in Santa Barbara. We had taken the Amtrak north from Los Angeles, spent the day exploring the city, and were waiting for the train to take us back home. But the train had been delayed by several hours, and we were stranded. We ordered from the pizzeria adjacent to the train station, and ate our avocado-topped pizza while waiting at the train station.

B. Burgers. The first meal we had in our first apartment was Burger King Whoppers. Eaten on our carpeted living room floor while sitting criss-cross, apple-sauce.

Our game was a fun diversion and provided us with a way to pass the time. It also allowed us to revisit shared memories of our life together. To remember happier times. To think about all we had experienced so far, and all we had accomplished in our years together.

It started at that one appointment, and at subsequent appointments while waiting to see neurologists and rheumatologists, we would turn to the alphabet. Together, we made up alphabetical lists of songs, movies and places.

The alphabet was steadfast. Dependable. We could trust its consistency when our life seemed so uncertain and so uncontrollable.

Because whatever the doctor would come in and tell us, whatever my mystery illness would turn out to be, it wouldn’t change what we already had. It couldn’t take the memories of our avocado-topped pizza.

Share
or  Copy Link
Link copied to clipboard.
Be first
139 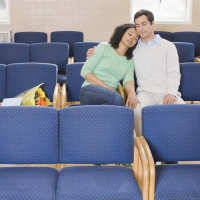