“Don’t look up your symptoms online, just go to the doctor!” you’ll often be warned if you have questions and concerns about your health. While doctors are necessary for managing your health, doctors don’t always have all the answers, as many people with rare, chronic or invisible illnesses have experienced. Doing your own research is often required in order to figure out what could be going on. But the bias against using the internet to find information about your health remains strong, as one woman revealed in a Twitter post that started a discussion about the place of online research in chronic illness.

Melanie Styles, who lives in the Tampa Bay, Florida area and has several chronic conditions including unspecified autoimmune disease, scoliosis, migraine, gastroparesis and endometriosis, shared a photo Tuesday of a digital sign she saw in her doctor’s office. The sign depicts a pair of hands holding an iPad, open to a screen that looks like the Google homepage, and says “Not a doctor. Don’t self-diagnose, talk to your physician.”

“It seems like doctors need to get their sh*t together and stop gaslighting patients,” she wrote. 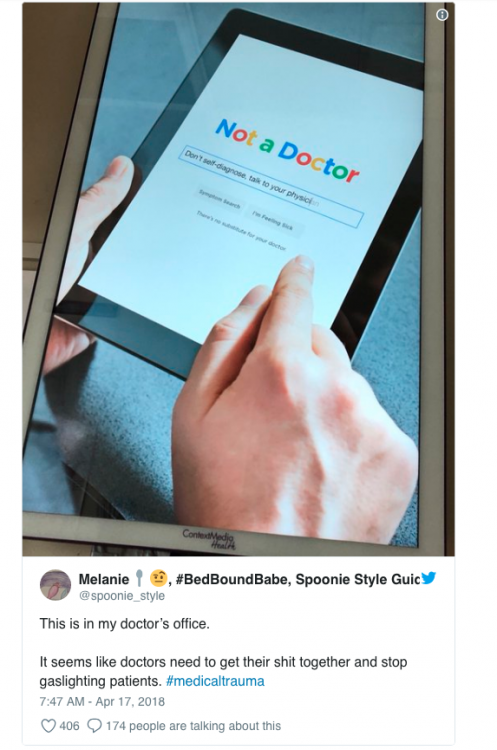 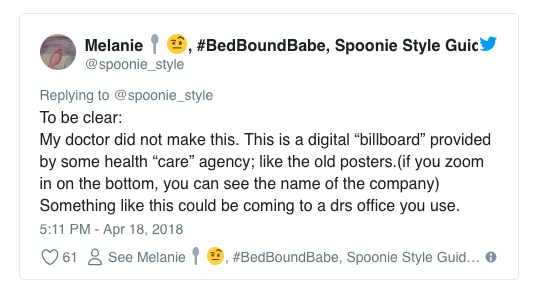 The tweet sparked others in the chronic illness community to share their own experiences of researching their illnesses online.

Yesterday my doctor told me he was glad I researched my condition instead of waiting for him to tell me what to try to feel better.
After seeing this, it makes me like him even more than I did 24 hours ago.

Except my doctors have had to Google my diseases because they are rare, and they are too busy to thoroughly study them. Patients are smart too, and can come up with quality information to help the doctors. It should be a team effort.

Yeah…weirdly enough I think I’m going to go with Google for a while.

And didn’t criticize their patients when they had questions or suggestions. But we don’t live in that world. Take control and take a stand for your health. It’s your health and I get it google can generate a ton of answers that lead us down a rabbit hole.

If I hadn’t Googled, researched and self-diagnosed, my ME would never have been diagnosed, neither would my endometriosis, nor anything else relating to my ME. Us chronic illness folk have no choice but to become our own experts/diagnosticians/researchers…

Ultimately, 82 percent said a medical professional eventually confirmed their diagnosis and 12 percent said they were in the process of getting a diagnosis.

Styles told The Mighty she had an “automatic, negative response” to seeing the billboard after experiencing years of trying to get doctors to listen to her about different medical issues. She’s found research on medications doctors have prescribed and answers for some of her symptoms from rare illnesses by using Google.

She said people who believe in the message of the billboard, that people shouldn’t “self-diagnose” or Google symptoms, may not understand how isolating not having proper medical care can be. Not everyone has access to good medical care, and some people have had traumatic experiences with doctors and feel empowered by the ability to do their own research.

“When people are able to see a doctor, the doctor spends minimal time with patients and often makes hasty conclusions. The doctor may not have had adequate education and training on recognizing, diagnosing and treating various diseases,” Styles said. “The beauty of the internet is access to varied opinions, both from patients and professionals.”

The photo sparked a conversation among people with chronic and rare illnesses, but Styles said she hopes it also teaches doctors and loved ones to listen to patients more.

“Over the past few days, so many people have related experiences about situations where the doctor has been in too much of a rush to push us through and either isn’t listening to how serious the condition is or listened but misdiagnosed the condition as something less severe than what the patient actually had,” she said. “It’s important that our doctors, family and bystanders with random opinions listen to what we have to say.”