When My Son Shared How He Feels at Recess, It Brought Me to Tears

This is a closet confessional.

Forgive me universe, for tonight I shall cuss, scream, and cry in my closet because of Duchenne. I’ll scream into a stack of towels so my son won’t hear me. I’ll cry from somewhere so deep inside my soul, that as the tears well I can feel the sorrow build in the pit of my stomach. It cramps into a ball, as it works it way up to my face and becomes hot with fear and anger. Just before the first tear escapes my eye, my face wears the sorrow and distorts into something so far distant from a smile that it’s unrecognizable.

The more I fight the urge to let it go the more my chest jumps, gasping for air.

I’ve forgotten to breathe in my desperate attempt to withhold. As I breathe in, it all falls apart. I fall apart. As quietly as possible, I hide in my closet and fall apart. I become a puddle of my myself.

All because I lied to my son tonight. Yes, I lied to Ryker.

As far as he knows, I had sauce in my eyes at dinner when he was telling me about recess at school. He told me how his friends sometimes think he’s a “loser” because he can’t run fast. How when they play “police man,” they run away from him and hide, but he’s not fast enough to catch them. He told me when they are “it” he tries to run fast (like daddy) but his legs won’t listen and his friends catch him right away every time. That he tries to play with friends, but he can’t keep up and they think he’s boring. That he’s glad he at least has a grown up to keep an eye on him who he can play with. That it’s not fair he can’t be fast like his friends. That sometimes he’s sad at recess. That he likes when recess is inside best, because no one is running and he has time to play with friends.

In this moment, I need Duchenne to be something tangible, something I can grab. Something I can scream at and inflict as much pain on as it is on my son. But since it isn’t and I can’t, I’ll have to pick myself up off the floor, get the sauce out of my eyes, go downstairs and love on my boy like it never happened.

I’ll remind him again and again, how he was fearfully and wonderfully made. 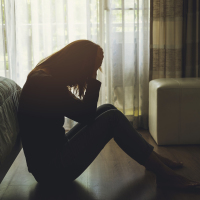