The Ways I’ve Tried to Stop My Compulsive Skin Picking

Compulsive skin picking (also known as dermatillomania) has been a part of my life for as long as I can remember. Whether I’m anxious, stressed or even simply bored, I’ll pick away at the skin on my lips until they bleed and become chapped and painful. I’ve tried to stop countless times but have always been drawn back to the habit if I’ve had a particularly bad or difficult day.

Even as I write this, I must consciously force my fingers to stay on the keyboard instead of tearing off a piece of skin from my lips.

I’ve tried all sorts of methods to try and stop – from lip balms to fiddle toys to only giving myself three chances a day for picking. Each time, the lip balm runs out, or the fiddle toy just isn’t enough, or I get to three and decide to have a “cheat day” (which inevitably turns into a “cheat week,” and by that time it seems pointless to give it up).

It can be difficult to explain how relieving it is to pick the skin, because if you’ve never developed the disorder it can seem disgusting and strange. Especially on an anxious day, it can feel like the only sense of reassurance, and somehow (at least for me) a cube with buttons on it just doesn’t provide that comfort.

It’s a never-ending cycle – you become anxious, so you pick at your lips. They become sore, which makes you more anxious (and especially in my case of being on immunosuppressants, paranoid about infections). All of this leads to more anxiety, and therefore more picking.

The solution? I don’t know.

For some people, wearing an elastic band on their wrist and snapping it when they get the urge to pick seems effective, although personally for me it’s not quite enough to relieve my anxiety.

For such a common problem, the solution can be surprisingly unique for different people. One method I’ve found somewhat effective is having an Invisibobble hair band on my wrist. It’s plastic but can be twisted and squished, which for me relives some of the pent-up energy which would otherwise be used for picking.

I haven’t conquered my skin picking. Not even close. I’ve picked my lips today, and I’ll probably pick them tomorrow. But hopefully, each day I can pick a little less, until I can proudly say my dermatillomania is a thing of the past.

Until that day, I’ll still have lip balms to hand 24/7, fiddle toys aplenty and my Invisibobble wrapped around my wrist.

And, in my opinion, I don’t think that’s anything to be ashamed of. 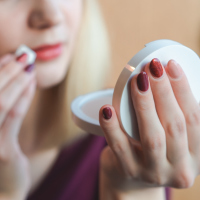