I have had a lot of people ask me about when I am getting a new doctor. I have talked about how my last doctor retired and the one before that gave up on me as a patient. I have been through a terrible run of doctors in my life and they are usually not my favorite people.

Having a chronic illness means going to the doctor a lot. A third of the medical community doesn’t believe my illness exists, another third thinks that it is a mental issue, and only the last third believes that it is real – living with my illness is never a fun fight. Also being a guy, being diagnosed fibromyalgia is a an odd one as it effects women much more than men, as only 10 percent of people with the condition are men. This is a fight I am used to with having to explain, yet again – I have this illness, and yes, I need help.

I did my research on my doctor. Google reviews, doctor review sites, even your own insurance will sometimes have ratings on doctors. I highly recommend to everyone to look into your doctor, see what people are saying about him/her. See if they have dealt with your issue or see the personality of the staff. You have the power to see and choose your doctor. You have the power to find a new doctor. You do not have to stay with a bad doctor. I feel that a lot of those with chronic illnesses feel they have to stay with the doctor that they go to the first time and are stuck with them forever. If you feel the doctor is not listening to you, you can find someone different who will. If you feel the doctor has given up on you, get a second opinion. Find a good one.

I took my wife and baby with me for moral support. I had several panic attacks leading up to actually seeing the doctor. I got worried that he would not listen to me or would, irrationally, make fun of me. I have had doctors tell me that I was imagining things or that I was wrong about an illness – and then I was proven right at a later date. I go in early, fill out my paperwork and wait. I am then taken to get my vitals taken and go into the patient room.

The doctor comes in, introduces himself, and asks what is going on. I explain I am due for a three month checkup and am due for a refill on my perceptions. I am explain that my last doctor retired and was looking for a new primary. He looked at me sternly and and questioned my medical history. I told him who diagnosed me, how many procedures I have been through, the tests run on me. He watched me carefully and informed me that I was on an opioid and started to tell me the dangers of the drugs I was on, and that he did not believe that I should be on them. He said he would need a drug test and a blood test to confirm that I was the one actually taking them and I wasn’t selling them. I said OK, as I was taking my medications correctly. He informed me that many people had been dying on the exact medication I was one.

This was not looking good so far.

I was starting to panic because I was feeling attacked. I, once again, was having to prove to another stranger that I was sick. I had been through so all this be before. I was given a cup to pee into and waited for the results. He came in to inform me that the test did not show the opioids I was taking and that he wanted more information. He asked for the names of all the doctors I had had, where their offices were at, who gave me the actually diagnosis. I grew frustrated. I give him all the info I had. He said the nurse would be in for the drug test in a minute and gave me the physical exam. I winced and groaned as he pressed and push on the points of tenderness and he seemed surprised. He poked like someone who wasn’t expecting to find something. He pressed a lot harder than I expected at first, and then he realized he was hurting me. He had me sit up and left to get the nurse for the drug test.

I was embarrassed at all this. I was angry. I complained to my wife. I was frustrated. She gave me some amazing clarity. She told me to stand in the doctor’s shoes. I was a new patient, with an uncommon illness, asking for a drug that he believed to be dangerous, coming from a doctor who “retired” and had a urine sample that showed I was not taking  my medication. She asked if I was in his shoes if I would be suspicious. I said she had a point and kept pushing through.

My blood was drawn, and I hate this more than anything. I had a nurse once hit the nerve in my arm and my arm went numb for almost a week. This nurse had to go get someone else as well making it last even longer. Then they had to switch arms. I struggled with it all and squeezed my little Fluttershy plush hard, relying on my stuffed therapy.

The doctor came back in and told me he was able to pull some of my records. He was going to refill my medications, but that he wanted to go through the active medication list as it had some discrepancies. Evidently it showed multiple duplicate medications. I cleared them up and was gave information on each on and what had happened.

The doctor finally showed some compassion and started listening to me. He asked to hold the baby and started asking questions instead of demanding them. He told me that my medicine was not what he wanted me on, but he wanted to try a new one to help ease the inflammation as he thought that it would help me a lot more. He was surprised that no one had tried it before. He agreed that I should have my doses increased as I was having more pain and needed more help.

We finished up, got my paperwork in order and I thanked him and left. I thanked my wife for giving me clarity and calling me out on being too judgmental. We talked about how organized this doctor was and how I had so many red flags that probably set off alarms all the way to Washington, DC. He had refilled my prescriptions, even if he didn’t agree with all of them, and had given me a new one to help me out.

We both had prejudices that we had to overcome. I was forced to look at the other side. It is always interesting walking in someone else’s shoes. I know I can get wrapped up in my own prejudices when it comes to my illness. I am glad I overcame them. 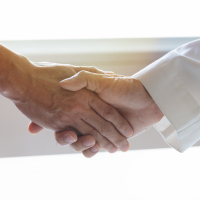