Everything happens for a reason. While almost everyone has heard this statement, only some really believe it to be true. When I question why such a path was chosen for me, I now know why. My son, Dominic, has forever changed me. He has made me more compassionate, less judgmental, selfless, and stronger than you would ever know. He chose me to fight for him and be his advocate. But most of all, he chose me to be his mom.

Dominic was an answered prayer. After years of struggling to get pregnant, numerous miscarriages and many fertility treatments, Dominic, our strongest embryo out of seven, blessed our lives with the help of IVF. When I first started questioning his health, these are things that gave me hope he’d be OK. We took all the necessary steps to ensure he would be as healthy as possible, including genetic testing. So when I received the news of Dominic’s rare diagnosis, I felt like G-d was playing a trick on me. Why me? Why us? Why him?

I’ve learned so many things throughout this experience. No matter the odds, no matter the prayers, the truth is in a matter of a second, life can unexpectedly throw something at you. It’s up to you to handle it with dignity, strength, and integrity. I tried not to feel sorry for myself for too long, because my son needed me. Sure, I would have moments, sometimes days of depression, wondering if life would ever get easier, if I ever was going to look at our son and not worry whether he was going to be OK. When you’re a new mom, the anxiety you feel towards protecting your child is unfathomable, but to have someone tell you your baby can have life-threatening symptoms, well, that throws a complete and utter spin on it. Let’s just say after that, you are on constant “red alert.”

Dominic always felt “floppy” to me. I looked at other babies his age and wondered why they could be carried on their mom’s hip; meanwhile Dominic had to still be held like a newborn. That was my first sign: hypotonia. When his pediatrician wrote this word on his physical therapy order with no explanation, I quickly started to google it. Thousands of disorders, diseases and syndromes popped up. Hypotonia is usually a symptom of something greater. Besides his lack of head control, Dominic always had horrible reflux, constant spitting up. At times he was vomiting full feeds.

Then the doctors told us he had “failure to thrive.” To me, he was thriving just fine. He smiled, laughed, was alert, made eye contact, but it was his plateau in weight gain that was the largest concern at the time. At 4 months old, his pediatrician guessed he was allergic to his formula. If only it was that simple. Weeks and weeks of trying to figure it out led to December 21, 2017 when everything finally came to a head. We took Dominic to the ER on the mere thought that maybe he had the flu. He stopped eating, started vomiting, seemed lethargic; I just didn’t want to take any chances. In my heart I knew something wasn’t right. The ER doctor came in and said, “Dominic has elevated liver enzymes and is hypoglycemic.” Those symptoms along with his low muscle tone made this doctor want to dig deeper.

I remember hearing the words, “It could be a metabolic disorder.” Thus began the days of watching my baby get poked, prodded, scanned, and examined accompanied by many sleepless nights. Finally, they had come up with a diagnosis; the geneticist walked into the room and wrote “congenital disorders of glycosylation (CDG)” on the board. He explained it to me in the most abbreviated version possible. I sat there and listened and as naive as I was I thought, “OK, so I just order this enzyme on Amazon Prime and Dominic will start gaining weight. All of his symptoms will go away, and life will be good.” I waited for the team of doctors to leave before I typed those words into my google search. Most of you remember the moment. It’s as if the world around me became hazy, and I suddenly started to feel like I was drowning. The walls started to close in on me. The words jumped out to me as if they were flashing in neon lights and all of a sudden I could not breathe. About 20 percent of affected infants do not survive the first year — 20 percent. My sister came to my side and asked if I was OK. My heart became heavy and the breaths just seemed too hard to take in. 20 percent.

It took a long while to start accepting what fate lay before me. It of course didn’t help that we spent the holidays in the hospital. I stayed off of social media in fear that any picture of a child beside a Christmas tree would make me feel worse. From there, it was in and out of the hospital. Days turned into weeks, and all of the therapies and specialist visits quickly became a full-time job. Questions of what our son’s future looked like visited my mind often. The support of my husband, family, and friends were helpful at times, but no one knew exactly what I was going through. I don’t have to explain to whoever is reading this because chances are you’ve been through it and some of you have been through much worse.

I cherish our CDG community more than you will ever know. The knowledge and support from parents you have never met, and the feeling of being a part of a unique family has helped me on days I’ve felt like giving up. The guidance and experiences shared are more valuable than any doctor or specialist will ever be able to give.

Dominic, now 8 months old, is getting stronger every day. We have more good days than bad. While some people may take it day by day, we have come to take it minute by minute. His symptoms have subsided. The fluid around his heart remains stable and the toleration of his feeds with the help of the G-tube placement is getting better. He talks to whoever will listen and makes us laugh constantly. Some have said that you can see the world through his big brown eyes, and I believe just that. The greatest thing about not knowing what his future holds is the feeling of hope that comes along with it.

Dear Dominic, everything happens for a reason. You, my love, are my reason. You inspire me to be the best I can be every single day. Your joy gets me through the days that sometime feel unbearable. Please continue to fight for your dad and me through whatever challenges you are faced with, and we will continue to keep fighting for you. Although I would love to heal you completely so you would never have to suffer again, I wouldn’t change you for the world. But I would most certainly change the world for you.

This story originally appeared in the CDG Care Newsletter

Share
or  Copy Link
Link copied to clipboard.
Be first
194 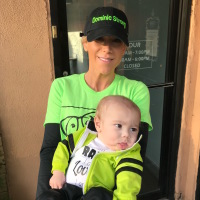