What to Remember About the Invisible Scars of Trauma Survivors

Over the past few weeks, people have been extremely triggered for a number of reasons. Even if they aren’t living with trauma, witnessing what is happening to children in this country is devastating and deeply disturbing. Thousands of children have been impacted at the U.S. border, affected in extremely traumatic and long-lasting ways, physically, mentally and emotionally. While the eyes of the national news crews are on them now, and while a couple of incredibly perceptive journalists are picking up on the fact that there will be enormous mental health repercussions, they will all be left to deal with the aftermath on their own soon enough.

I went to a wedding last week and met a couple who went to the 9/11 Memorial and Museum and said they had no idea there were kids and families living and going to school in the immediate area. Not until I told them my own story. Then I learned that next week, an exhibit called “Comeback Season: Sports After 9/11” is making a debut at the museum. I haven’t seen the exhibit and as a journalist I know better than to put down or criticize what I don’t know. I’m sure it’s an important and moving exhibit in its own right.

But the world at large is still pretty unaware that there were children living and going to school in Lower Manhattan at the time, and it’s not a story anyone is scrambling to help us tell. And it woke up that tiny person in me who, 17 years ago, along with my middle school classmates and neighbors, felt completely passed over. We were all simply encouraged, in the aftermath of 9/11, to “get back to normal,” and we tried hard to do just that. A lot of us told ourselves: our experience isn’t as important as others. Our parents didn’t die, so we shouldn’t complain. Kids in other countries live these horrors all the time, so we’re lucky this only happened once. Unfortunately, this is how it will be for years for children in this country who live with trauma and its invisible scars and feel that their experiences can never be understood, or will never be acknowledged. For the record, all of these experiences are separate, valid and important.

Backing up a bit further, I woke up on my first wedding anniversary earlier this month to see a new comment on the wedding photo I’d posted to Instagram with the new World Trade Center behind us. Someone had simply commented with a plane icon, and in the comments view on my end, it looked like it was heading, dead on, right for it. The woman who “commented” wasn’t someone I knew, she looked like a travel agent who probably didn’t really think much about her “self-promotional” strategy of tacking on an icon of a plane, with no words, onto any photo #honeymoon. Some people I showed it too saw “it” instantly. Some people, it took a second. Others couldn’t figure it out. This is exactly what I’d expect. However plugged in you are to an experience, however close your own experiences have come, is how much you will empathize.

The same way the smell of sunscreen just reminds you of summers at the beach, sounds and words and images will trigger us in an unpleasant way, though it may do absolutely nothing to or for you. It’s the same way that plane icon made me cringe, someone who hears a rape joke on a TV show or at a party might inwardly, silently cringe. Someone who casually says they’re going to kill themselves if they don’t get their coffee soon may not realize just how close to home that comment hits for the person next to them who lost a relative to suicide.

Things that seem like “no big deal” to some people can really hurt others.

There are eyes on children who have been separated from their parents at the U.S. Border and slept under sheets of tin foil right now.

Those children will be traumatized for some time, far beyond when everyone’s eyes and the eyes of the media divert. Then, they will be so busy trying to get through life, they may not have the means or awareness to see the signs — or afford to find the help they need since they are just trying to survive.

I started to try and bring the experience of 9/11 child survivors to light in 2011 and have kept trying ever since. To what end? The statistic has, for a long time, been that one out of every two children in this country will experience something traumatic in their lifetime, and many will never find recovery. Some, like me, will find a lot more danger and distress along the way — along with misdiagnosis.

Hundreds and thousands of 9/11 survivors who feel lucky to be alive and grateful to have their loved ones with them are still 100 percent entitled to feel the pain that comes with triggers even years later. We are people who want to move on and have moved on. But just like the children who are being ripped away from their parents and held in cells, just like the women who have said #MeToo are much more than what happened to them, like people who have survived natural disasters and violent crimes and the sudden death of a loved one, survivors are not clinging on to their pain, but it is unfortunately always eager to be woken up.

The first step to healing pain is acknowledging it. Everyone’s eyes have to be open, and we need to feel seen—and at the same time, survivors of trauma will always move through the world with invisible scars, looking just like everyone else. That’s why we need to keep telling our stories, and their stories, even when nobody will help us tell them. Even when we think nobody is listening.

Because you never know who is. 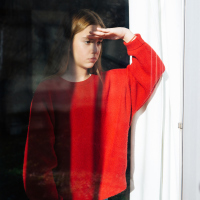