What My Son Meant When He Said He Felt 'Crazy'

The morning of my youngest son’s preschool moving up ceremony he woke up saying he felt “crazy.”

He has mastered the art of being silly, but that was not what he meant this time. A few times before this, he had identified feeling “homesick” while at home. After we discussed what the word “homesick” means to him in feelings, I deduced it was anxiety. This time I asked him if feeling “crazy” was like feeling “homesick.” He said, “Kind of, but a little different.”

I am so grateful he has the ability at 5 years old to talk about his feelings so openly. Having gone through much therapy myself since losing his oldest brother, I simply used the same steps that have been used with me, only in a more age appropriate manner.

I asked him where he felt “crazy” in his body. By labelling where his body was feeling out of sorts, he gained the awareness and tools to be in tune and notice when something doesn’t feel right.  I asked him to explain what he felt. This was slightly more difficult, so I had to prompt him. I asked him if his tummy hurt? Did it feel like he had butterflies in it? Did his heart feel like it was beating fast? Did his head feel busy or foggy? Giving him these examples helped him to be more articulate.  I made his experience normal.

The next part had nothing to do with me. His older brother overheard us and likened it to an experience he had. He asked him if he was feeling a little nervous and excited at the same time. He explained when he gets ready to take a spelling test that is how he feels.  I gave him the tools to self regulate. Finally, we worked together to calm “the crazies.”

We used a tool he learned in his preschool classroom called “whole hand breathing.” We closed our eyes and as we traced our fingers up one side we inhaled, as we went down the other side of the finger we exhaled. We did this until we breathed up and down all five fingers. He said this helped him to feel better.

The moving up ceremony was not scheduled until nighttime. When I picked him up after school, he told me his “crazies” went away for good when he got to school.

In a world where emotional health still remains taboo, especially for men, providing children with the skills to tune into themselves and the tools to self regulate makes all the difference. They are our future. We must not only teach them about the academic part of life, but also the emotional. 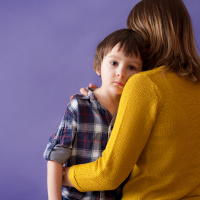