There is a feeling comes from Crohn’s or depression. It’s a feeling I get when someone asks, “How are you?”

It’s not one that I can easily describe, and not one I would want to either…but let me try and illustrate. Picture the following:

Your in an open field, long grass around. You’re young – probably in your early teens, skipping along, playing with your friends in the field. The sun warm on your face and a light breeze refreshing from the back.

As you are playing with your friends, the colors start to dim. The vibrant green of the grass has lost some luster. They sky is more muted than before. The sun is still shining, but less and less warmth comes from it’s rays.

You mention this to your friends. They don’t see any change.

“Maybe you’re just tired, go lie down for a bit. We’ll run ahead a little and then come back to get you in an hour,” said one friend.

You agree – that must be it. You have been playing all morning and most of the afternoon. It’s normal to need to rest when you have over exerted yourself. So you walk to a small hill in the middle of the field and lie down.

A few minutes pass and rest, or even sleep for that matter, is impossible. Something does not feel right and it makes you uneasy.

Opening your eyes, you can barely make out the colors now. From what you can tell the sun is still in the sky, but it feels empty. The grass around you feels more brittle than before and looks almost grey. Reaching out, you try to touch a long grass blade next to you. But, instead of the comforting silk you felt hours ago, the blade of grass cuts your hand.

You scream out in pain and shock. Mostly shock.

Curiously, there is no injury from anything to find out what’s wrong.

Surely your friends are nearby, right? As you get up, you see some figures ahead of you – could that be them?

Starting to panic, you run to the figures – the blades of grass making small cuts into your skin as you go. You yell from the pain, but the figures do not acknowledge anything you say.

Or any cries you make.

Finally you catch up to the figures, exhausted.

“Did you not hear me?” your voice does not bother to hide your anger or hurt from their lack of concern.

“Whatever do you mean?” one figure raises their hands and shrugs, “We saw you were running to catch up to us and we figured you saw a snake.”

“A snake?” Perplexed and dazed you find yourself saying, “Haven’t you noticed this place has changed?”

“In what way?” another figure inquires.

You explain everything. As you get to the blades of grass cutting you, the third figure interrupts, “There aren’t any cuts on you, your not bleeding.”

Confounded by the remark, you look down and see all of the wounds – the old and new ones from the grass.

“You don’t see this?” raising up your cut hand, “or feel the emptiness of the sun, or see the blurriness of the colors and shapes?” Your other hand is motioning to the environment around.

“You must not have gotten enough sleep,” the second figure declared, “maybe we should go back so you can rest more.”

“ I don’t need…” you try again to clarify. Are they not listening?

“It’s not that big of a deal, you are exaggerating.”

Whatever you call that feeling, that is how I am when that question is asked.

That is why I do not usually answer truthfully to the question, “How are you?”

My physical appearance does not show my illness. It’s not like a cut on the hand.

It is cuts, polyps and inflammation – that much is true, but it is all on the inside. Not on the outside.

I would rather not explain that to someone who is just being polite and does not really want to know the truth.

Some people really do want to know, and to them I am honest.

My partner, friends and some family know the truth. To them I am honest.

To them I tell the truth.

The truth that today I would have rather not existed, if it meant being pain-free. And I should not think like that.

The truth that I am angry at myself for having an illness that I have no control over. And I know I should not be.

The truth that all I really want and need is for someone to listen and say that I am not alone. Even if it is a lie.

A truth that most people would find to be a lie and a “cry for attention.” An absolutely laughable notion. I do not need or want attention. Far from it.

I so desperately want to be normal.

So when the rest of the world inquires, “How are you?” I put on my crystal mask where the smile never waivers and say, “I’m fine – how are you?” 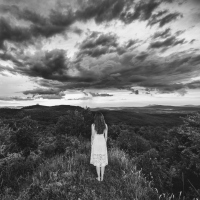