The first side effect to hit me was the yawning; it became a constant. I started to wonder if I’d ever be able to stop.

“Don’t worry about it,” Duncan reassured me. “After the sleep deprivation you’ve been through, yawning all the time is perfectly reasonable. It’s your body’s way of giving in to the exhaustion.”

Duncan is my traditional Chinese herbalist and acupuncturist. He didn’t prescribe me the SSRI; he’s more of a stinky powder and murky tea kind of guy. But he was completely supportive when I told him I’d started taking SSRIs. My life was at stake, truth be told. Good old Duncan MacDonald with his good old traditional Chinese name. Wanting me to live. Bless him.

He completely understood my reasons for taking this “shortcut” back to normalcy. I’d been white-knuckling it for four years after my dad died. The house fire took everything else I had in me just to survive. No surprise that formerly healthy habits and clean living routines had given way to comfort eating and Netflix numbing. Facebook rampages. Night terrors. A completely irrational fear of everyone and everything. In a word, post-traumatic stress disorder (PTSD).

And then, one day at work during a routine earthquake drill, it all came crashing down. I experienced a momentary nervous breakdown. Immobile with fear, hyperventilation, the whole nine yards. There I was, on the 30th floor of a high-rise in downtown San Francisco, pretending to be trapped, and literally waiting to be rescued. Kneeling in coward’s pose under my desk, I was struck with a yawning realization: if this really was “the big one,” if I died right there, right then, my life would have been for absolutely nothing.

So I cried uncle. I went to Kaiser, knowing the magic words that would get me the striped green and white pills: suicidal ideations. “Yep, doc, I’ve been thinking a lot about that… whole… um… self-killing thing. You know?” Prescription, granted! Take one by mouth every morning.

Five weeks of mornings later, it occurred to me once again that I had a body. And a life. I started catching glimpses of myself again. Bits of hope and awareness peeked out like the tiniest tips of buds on a late-winter tree. My rebirth began from the ground up. I went outside barefoot to get the mail one chilly and damp Saturday morning — grit and pebbles and sticks be damned. My bare soles spread into the soil. I kissed some dirt, and I liked it. (I still detest Katy Perry’s other songs, though. Let’s be clear; it’s not like I’ve lost all sense of propriety.)

But I really knew the meds were working their magic when I started to treat myself to nice things. A proper breakfast before facing the day ahead. Manicures and pedicures every couple of months. A new haircut after five years of no style whatsoever. A big bolt of platinum in front, to celebrate growing in my gray. Makeup, earrings, cute shoes, stylish glasses. Clothes that fit.

Sitting at Philz Coffee one morning, I realized how good it felt to feel my ankles again. Chunky monkeys reporting for inspection. I satisfied my obsessive compulsive disorder (OCD) tendencies by counting each bone and pressure-testing each tendon. Imagining a weaver’s loom inside, stitching feet to ankles, knees to shins. Creaky-ish, but still functional. Whew.

One year in on this SSRI train, 15 pounds heavier (ugh), I still love the way my chubby little ankles feel. I twist and roll them, flex and relax them. Other limbs have rejoined my trunk as well. My arms, my wrists, my hands. My ribs, my waist, my spine. I enjoy seeing how many parts of myself I can connect, extend, contract and relax, all in one stretch. One year in, I can finally claim what it is I need, and I feel ready to let go of some stuff I don’t.

And dreams — oh, how I missed you. I started to worry I’d lost you, or that you were done with me. You’re back. And you’re mostly just little things. Not scary. I’m so grateful for that. You were just glimpses, snatches at first. Even now, I usually don’t remember you, but I remember that I have you. That’s better than before. I’m sleeping better. And I’ve stopped yawning so much!

It’s been a homecoming, this coming back to life. This being alive thing, this having a body, it’s not so bad. I think I might stay a while.

Share
or  Copy Link
Link copied to clipboard.
Be first
35 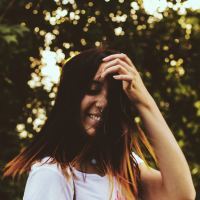