How I Joined My Nonverbal Son's World

When my family goes out, sometimes it can feel like there are many eyes on us. Because my son is nonverbal with autism, there can be some moments that garner people’s attention or reactions.

I don’t blame others for this. Sometimes Lucas’ excited yelps even startle us, so it’s hard to be offended when a stranger jumps in a public place. As long as the reaction isn’t dramatic or rude, we just let it go. We’re used to Lucas’ occasional shouts. Strangers aren’t. We get it.

It’s those outside world moments that stand in stark contrast to the inside world our family shares together. It’s a world, behind our front door, where we can all be ourselves whether we’re on or off the spectrum.

The happy screams or repeated actions that might attract attention at an Applebees, are just a regular part of our family. It’s the same as how my daughter will spin around laughing until she falls down and, usually, hurts herself. We all have our personalities and we all love each other for it. There’s no judgment or disapproval. No one tells anyone else how to be in our home. You get to be who you are.

That’s us. That’s the real us. It’s who my son gets to be when we break away from the pressures of using forks or sitting nicely for a dinner out. Waiters don’t rush over during an impromptu meltdown to assure me, “It’s alright. Don’t’ worry.” At home, he doesn’t have to be who the world wants him to be. I don’t either. None of us do.

We can just be us.

We can sit with a board book and, with the turn of each page, flick the corner to make a “boing” noise. No one tells us it’s wrong and there are no eyes watching from across the room with a twist of misplaced sympathy.

To outsiders, who view him in fleeting moments where he’s expected to conduct himself a certain way, Lucas might seem so far away and unable to interact. That’s pretty far from the truth, though. His approach to the world is the most unique I’ve ever seen, but it’s not oblivious. There are things he loves just like everyone else. I love discovering what they are and trying to figure out what he loves about them.

When he was smaller, I didn’t fully understand that yet. I don’t blame myself for not understanding. That’s the natural role of a new parent to a child on the autism spectrum. New moms and dads are usually new to kids in general, so navigating a nonverbal relationship can seem more than daunting when you’re still trying to figure out how to just be a parent. You try to get your kid to play with Legos or wave to the guy in the Santa suit. When he doesn’t, you hurt because you see it as something your child is missing out on.

I was the one who was missing, though, but not in the way I was thinking. I was missing out on Lucas’s whole world. It was happening in front of me, but I was too busy wringing my hands over his actions to notice what they were. The clapping, the spinning of wheels on his toy car, and his fascination with reflections were all on full display. Instead of taking part or wondering what he loved about doing these actions, I’d see them and think, “How can I get him to stop doing this and do the things I want?”

It’s a selfish way to approach a relationship. Of course, Lucas should try to play my games and take part in my activities. That makes sense. Why then am I not taking part in his? The same apathetic nature he had to my events mirrored the way I acted with his. I felt like a huge hypocrite. 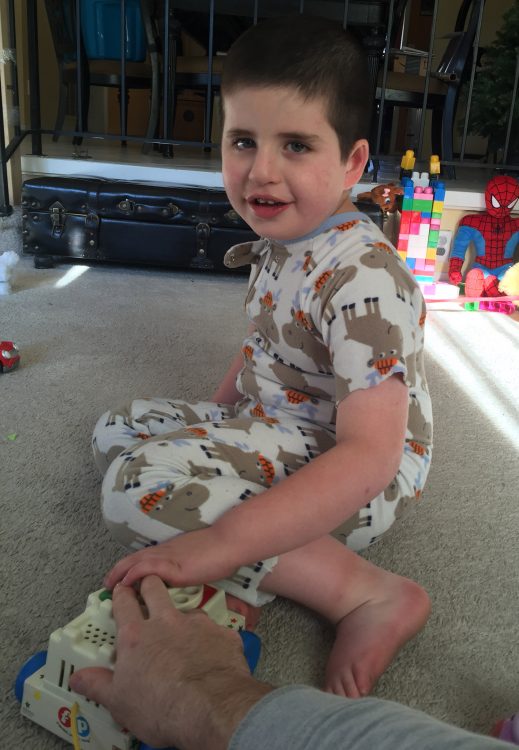 Nearly every day, I watched as he took his toy telephone and would wheel it in and out from under the chair in our living room. He’d stare at the mirror behind it and watch as it popped out slightly. The look on his face was very serious.

Then, one day, I waited until he stopped for a moment and patted my chest to ask if I could join him. He let go of the car and allowed me to wheel it myself in and out from under the chair. He watched intently in the mirror as someone else was doing it for the first time. When I finished, he leaned in and gave me a hug. At that moment, I knew I had done the right thing. In my heart, I knew that he didn’t feel as alone as he had before I joined him.

Our relationship changed that day and it’s been better ever since. Just as my son will now wave to company or sit nicely in his seat for me, I will bounce a rubber ball on the corners of his bed or watch the same Raffi song over and over on Youtube until my ears fall off for him.

It’s only fair. Just as I want him in my world, he wants me in his. Nothing makes a father feel prouder than that.

James Guttman is the dad behind Hi Blog I'm Dad. He is the father of two children including one nonverbal son. Follow his writings about parenting, Autism Appreciation, mental health, positive thinking, and more at HiBlogImDad.com.

One of the things I struggle most with, and why I was interested to join this community and see if others had similar challenges, is balancing the needs of my children with those of my chronically ill husband.

He was diagnosed in late 2019 and then the pandemic hit, so we’ve been figuring it all out at the same time. He is at high risk for COVID, which could worsen his disease even if it’s a “mild” case. I imagine many of you here have similar risks. So our household has stayed locked down essentially the same way we have since March 2020.

As it is becoming clear COVID is a long term risk, we are starting to discuss what this means for our family life. Nearly every day I fret over my children’s lack of play dates, of our decision to homeschool, of how we haven’t seen family in person, of how many adventures out in the world we aren’t taking. And yet, the risks to my husband’s health are real and aren’t going away. This moral calculus of whose needs get priority is exhausting. Can anyone here relate? Does anyone have another perspective to share? #GeneralParenting #ChronicIllness #Parenting

3 people are talking about this
We use cookies and related technologies to help identify you and your devices, enhance your experience and conduct advertising and analysis. By choosing "Accept", or by using this site, you are agreeing to our use of cookies. You can read more about how The Mighty uses cookies in our Cookie Notice.
Manage Choices
Accept