As I turned on “Dear White People: Volume 2,” the last thing I expected to hear was the word “misophonia.” I had to go back and listen again, certain my overly sensitive hearing had failed me. Unfortunately, it had not. The conversation was between Sam and her best friend Joelle as they walk through their satirized Ivy-league campus. The show makes a point of zooming in on flip-flops, a noise frustratingly unbearable for those of us who live with misophonia in real life.

“When does the constant drone of flip-flops become background noise?” Joelle asks. A strange question for anybody who has misophonia, since we know it never will. Joelle continues and exclaims, “My misophonia is triggered as f*ck.”

As Joelle complains, there is no obvious pain on her face. Joelle does not seem to freeze, a particularly telling sign of the fight/flight/freeze reaction. In fact, Joelle seems relatively fine.

“Oh, misophonia? She does braids out of Waller, right?” Sam quips.

“Oh, look at you, making jokes,” Joelle says, barely offended, she continues, “It’s a hearing condition, and also a great name for an Outkast album.” Just like that, misophonia was made into a quick, witty, original joke.

Those who haven’t heard of misophonia might be intrigued – what a strange fact – people are bothered by flip-flops? Joelle’s reaction, and the subsequent banter between her and Sam make for a funny exchange. However, I don’t find misophonia. Misophonia is rarely that easy to tolerate. It is not an annoyance at flip-flops, chewing, or any other sound.

Misophonia involves a great level of emotional fatigue and pain. As I continued to watch the episode, my awareness now heightened, I wondered if this plot point would come up again throughout the episode. I wasn’t surprised that it hadn’t. Our character Joelle, supposedly having misophonia, is now living with Sam in a dorm room. I am sure there are persons with misophonia that have roommates – but I personally cannot imagine living in such a small space with a potential trigger. Sam’s phone notifications go off constantly, and she types on her computer all night. Joelle says nothing and sleeps blissfully throughout the ordeal. Joelle later eats chips (a major trigger for many with misophonia) with Sam, also chomping down on the crispy snack. Joelle goes so far as to buy Sam a pair of flip flops for the shower – the same item used as a plot device for our one-off joke on misophonia.

There is almost no representation of misophonia in popular culture. I’d argue it has never once been accurately portrayed.

The problem with the “Dear White People” misophonia reference is their character likely does not have misophonia. Joelle and Sam’s conversation about misophonia is telling. There is a very real conversation that people with misophonia have with their friends when bringing up the condition for the first time. It is rarely a calm conversation – it is a hard talk, often filled with heightened emotions and pain. Many are met with disbelief — far worse than a joke. Misophonia is not about the annoyance of flip-flops, it is much more. The misery of our condition, including the isolation, is hard to show on television. However, misophonia is more than a quick joke. We are real people who are struggling. While it’s great we are starting to get more awareness, without context, this does little more than cause people to question if it’s even a real thing. I think back to Kathie Lee and Hoda making fun of misophonia on live television, “it sounds like ‘misophoney,’” they said as they laughed.

Coming so soon after the “Criminal Minds” episode, which incorrectly classified misophonia as a psychological disorder, I find this deeply concerning. Awareness for misophonia without context might very well prove to be damaging. As the International Misophonia Research Network (IMRN) continues their scientific journey, misophonia in pop culture may become an interim threat to truth before accurate information can fill the gap. While exposure to the name  “misophonia” could help people get diagnosed, I wonder — at what cost?

Out of all the representations of misophonia – which are few and far between, “Dear White People” didn’t do too bad. The problem was a lack of context. Misophonia is not necessarily a “hearing disorder,” but the general public won’t necessarily notice a large difference between a “hearing disorder” and a neurological disorder involving auditory processing. This is understandable. The representation falls flat when the character exclaims brazenly that her misophonia is “triggered as f*ck,” the same way a person who is frustrated their car keys weren’t left in the right place might say their “OCD is acting up.” Neither have the condition they are mirroring. While “Dear White People” trivializes misophonia, I am thankful they did not focus on the rage, specifically “chewing rage,” and did make an earnest attempt to mention the condition on TV.

However, I am not happy that popular culture is starting to use a very real condition as the brunt of a joke. Those with misophonia need to keep talking about it from a real perspective. When we speak of the disorder, we must ensure we are encouraging an accurate representation. Unfortunately, in today’s society, it’s very easy to create a meme about how “frustrated” we are, and we end up being minimized to generalized sound bites. 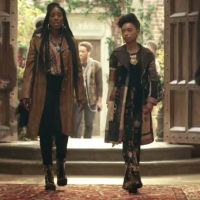