The Cycle of Emotions You Experience While Riding the Diagnosis Rollercoaster

There are very few experiences in life more confounding than trying to get a diagnosis for an autoimmune disease or rare health condition. These conditions are typically difficult to diagnose, and too often the process is prolonged by our concerns being written off as stress-related. In cases like these, we can begin to doubt our own experiences and downplay how the symptoms are affecting us, which only delays the diagnosis process further.

Even when your doctor takes you seriously, the process is emotionally charged. You may go from hopeful to discouraged and back again in the case of a single doctor appointment. You may cycle through sadness, anger and acceptance each step of the way. Most surprisingly, when you finally receive a diagnosis, you may find yourself feeling both grief and relief.

While it may seem counterintuitive to feel relief after being diagnosed with a chronic illness, there’s a logic to this common response. It is physically and emotionally draining, when you are feeling unwell, to go through appointment after appointment and test after test, trying to find answers. Even between doctor visits, you may be consumed with worries and “what ifs” – not to mention, struggling with untreated symptoms. After diagnosis, that uncertainty is removed, treatment begins and you are able to begin creating a new “normal.” A sense of relief at having a name for the symptoms you experience, a known enemy to fight, is a reasonable reaction.

But what happens when that certainty doesn’t come?

I have been riding that particular emotional rollercoaster since childhood. At 9 years old, the pain in my knees was written off as “wear and tear” osteoarthritis. At 12, the aches and pains I complained of were diagnosed as anxiety, even though I was not a worrier. At 14, my extreme fatigue was dismissed as stress, after repeated tests for mononucleosis came back negative. In my 20s, I was told the debilitating joint pain throughout my body was due to my weight.

By that time, I’d had enough. I knew – had known for a long time – that something was wrong with my body. As the doctor explained about the stress even a few extra pounds could place on weight-bearing joints, I interrupted him to ask, “How exactly do you explain the pain in my hands? Are my fingers fat?”

At that moment, something shifted. The doctor looked at me, and then sat down to review my chart. He came over and examined my hands, then my feet. He began pressing on various points around my joints, and asking “does that hurt?” or noting when I winced. He noticed the peeling skin on my hands. That day, he wrote me a referral to a rheumatology specialist that read “possible fibromyalgia and/or psoriatic arthritis.”

As a result, I did get diagnosed with those two conditions, 20 years ago now. I experienced the relief, and the grief, that diagnosis brings. You would think that’s where the rollercoaster ends, but the ride kept going.

Within a few years, my trusted rheumatologist moved away. The first replacement I tried told me that fibromyalgia was a “wastebasket diagnosis” and that the psoriatic arthritis was responsible for my symptoms. He wanted to put me on a medication that my previous doctor felt was too dangerous in the long-term due to my young age. When I questioned him about possible liver damage from long-term use, he replied, “I’ll buy you a new liver. Just take the pills.” Needless to say, that was my only visit.

The next one I saw told me that fibromyalgia didn’t exist and my pain was psychosomatic. She also questioned the psoriatic arthritis diagnosis, because there was none of the characteristic bone damage on my x-rays, though that may not develop until later in the disease process. While she removed any certainty I felt, she had no answers to offer me about what was wrong.

Thanks to my job as a health writer, I read the most recent research on fibromyalgia (still unfamiliar to many doctors back then) and knew these doctors were uninformed on that point. However, there was no proof of my psoriatic arthritis diagnosis. Frustrated and discouraged, I quit treatment for psoriatic arthritis. My primary doctor, who initially suspected the conditions, assured me that the rheumatologist was wrong and wanted me to see another. But another ride on the rollercoaster was more than I could handle at the time. He agreed to monitor my condition, so long as I would agree to take treatment again if my symptoms got worse. Meanwhile, I decided to do everything I could with diet, exercise and stress management to control my fibromyalgia symptoms. We continued to operate on the assumption that he and my first rheumatologist were correct, and I did have these two conditions… until recently.

After a particularly bad cold and flu season, during which I’d been repeatedly sick, my condition – whatever it is – began to flare up. Keeping my agreement to seek treatment if things got worse, I sought a referral to a new rheumatologist. She took a full set of x-rays and found little that might be the characteristic damage of psoriatic arthritis, but enough that she wouldn’t rule it out. However, in the years since I’d first been diagnosed, a biomarker had been identified for the disease. A simple blood test could settle the question for most people, she said.

I took the test and waited anxiously for my results. A nurse called. “Your blood test came back positive for psoriatic arthritis. The doctor wants to see you to discuss medication.” There it was again after all these years, the odd combination – grief and relief. I joked that the good news was I hadn’t been misdiagnosed, but the bad news was I hadn’t been misdiagnosed.

But this rollercoaster had yet another loop. When I met with the doctor, it turned out the nurse was wrong. The test was negative. “There’s a small percentage of people who have the disease for whom this test is negative,” the doctor explained. “You weren’t necessarily misdiagnosed, we just can’t be certain.”

As it turned out, a different, non-specific test was the one that was positive, and that’s what the doctor wanted to discuss. That test provided the first concrete evidence that I have an autoimmune condition. After living with pain, fatigue and other symptoms for over 30 years, I’m trying to let that be diagnosis enough.

Over three decades, I’ve lived with doubt and uncertainty – through multiple misdiagnoses – never knowing for certain what’s wrong with my body. I’ll continue to do everything I can to promote a healthy, well-regulated immune system with diet, exercise, sleep, relaxation and medication, and try not to be frustrated at the limitations of our medical knowledge. Part of me is still waiting for an answer, for that relief. But for now, I’m stepping off the rollercoaster. 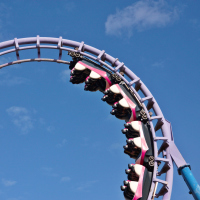