Social anxiety likes to make the afflicted feel ashamed. I know I have, for many years. Now I am going to begin shattering that. I want to expose its ugliness and lighten the load.

1. You make plans and often cancel them.

Many people who have social anxiety don’t actively shy away from making social engagements. Actually, we could make them all day, every day. The problem is keeping them.

It’s oh-so-easy to arrange a big night out, a speaking engagement or meeting your partner’s family for the first time. You even believe at that point you’ll be OK to do it. That’s because you made the plan weeks, maybe even months, before.

Then the week of the engagement hits.

You watch the clock tick down toward the dreaded day.

You feel exhausted by the inner conflict raging within you that states you really want to go but you just don’t know if you’ll be able to cope.

You swing from convincing yourself you can do it to falling into the pits of despair.

You cannot sleep the night before because the reel of “what if that happens?” keeps on playing in your mind.

You make the whole thing into a disaster of epic proportions.

Then the day arrives.

You cancel. You just cannot do it. You hate yourself for being such a “failure” and not being able to operate as a “normal” human being. Everyone else has their stuff together, so why can’t you?

Guilt and shame take over.

Each time you cancel, particularly if it’s with the same people, you find yourself creating lies to get out of the situation.

This is something I feel the most ashamed of.

People like to call them “white lies,” as if to make them pure and innocent. I’m no goody-goody but I hate lying, particularly to people I like and respect. I try my hardest not to. It’s sad to admit I’ve done it a lot in the past to get out of social gatherings.

In my defense, to a degree, I will say I have not always had to lie. There are people in my life who will understand if I tell them I can’t do something. My husband and best friend know me well enough to understand. They also help me to consider if canceling is what I really want to do.

Not everyone is so open. I understand.

It must be incredibly tiring and annoying to have the one friend who cancels at the last minute on a regular basis.

It must get tedious listening to the increasing elaborate excuses that no one believes, even the liar.

Next time that friend who keeps lying to you with an excuse does it again, I ask you to try and place yourself in their shoes. If they’re anything like me, they’ll loathe themselves as they tell the lie. They will feel like a failure and worry this may be the lie that loses your friendship.

I know relationships shouldn’t be built upon lies but I do ask you consider why that person is lying to you. You may be annoyed by them but believe me, they’re even more annoyed with themselves.

By the way, this does not mean I lie every time I cancel. Store that away for future reference, friends and family!

It’s happened to me. Sometimes I realized why. Other times I still don’t understand.

People don’t like to be let down. It takes a special kind of person to leave their ego behind and look at another person’s motivations, separate from their own agenda.

The worst thing that can happen to someone with social anxiety is to lose friends. That leads to isolation. You’d think we’d want to be on our own. In fact, that’s the last thing we need.

It’s so mixed up. We need social interaction — every human being does — but we fear it. No one said that what we fear is always bad for us though.

If we have no friends, we will never be social.

4. You think people are judging you.

When we are out, an inner voice often takes over. It’s a chatty blighter that’s hard to turn off.

We can be sitting there with good friends and not hear a word of their gossip. The inner voice is telling us we shouldn’t have chosen that particular outfit, we look fat, we’re not engaging enough, we’re not funny enough, we should smile more, the woman at the bar gave us a dirty look… The list is endless.

The inner voice or social anxiety is a hard one to silence. It’s especially loud at the beginning of the social event.  Sometimes it disappears. Most of the time it’s there, waiting to get a snipe in.

Paradoxically, those with social anxiety can be party animals. Some learn to overcompensate when trying to hide our social fears.

Remember: Just because someone has social anxiety doesn’t mean they’re socially awkward or shy. Many of us are great in social situations once we’re settled. It’s the fear before the occasion and getting through the tough parts that does us in.

Some will drink a lot of alcohol or be outrageous and noisy to cover it up. I used to.

I cringe at myself in my 20s when I was trying so hard to fit in by being a big presence. It was masochism how I drew attention to myself when it was the last thing I wanted. I thought I needed to be extroverted to be accepted. Everyone else seemed to be.

I thought everyone likes the inappropriate, mouthy, volatile and loud one. I now realize people like those kinds of people for the show they put on. It doesn’t necessarily equate to getting respect or genuine friendship.

Nowadays I’d rather be introverted little old me. She’s not such a bad person and, more importantly, she’s genuine.

As a child, I didn’t attend many groups or organizations. I now realize this came from having a mum who had social anxiety too. I’m not blaming my mum for anything but it helps to make sense of things.

I didn’t like joining in with things and standing out.

To this day, I find it incredibly difficult to do something with others that I might look silly or fail at. My husband asks me to join him in a café playing board games with others. Geeky, yes, but it could be fun. I haven’t gone yet. I’ve told myself I’m rubbish at picking up rules to games and I don’t want to make mistakes in front of others, particularly strangers.

I’ve been on the verge of joining various different groups so many times. I’ve signed up or stated my intention to go. Sometimes I find the courage to do it. Often I don’t. I hate how I let myself down and deny myself the opportunities.

I try to push myself forward to do these things. Sometimes I succeed. When I don’t, I try to give myself a break and try again another time.

7. You wish you were anyone but you.

It’s so hard when you’re in a social situation and you watch people just gliding through it.

A person with social anxiety envies the person who can walk into a party and start a conversation with strangers.

We stand on the corners, seeming aloof and cold.

I am an engaging, chatty and sociable person when I’m comfortable. Unfortunately, when you first meet me, I can sometimes come across as guarded and distant. It’s true I like my own personal space but I can thrive in the company of others too.

It’s tough being the wallflower trying to blend into the wallpaper and wishing you could be anyone but you.

I’ve taken to really looking around a room now and seeking the truth. The last few times I’ve been out socially, I’ve noticed that people who seem like they have it all together often don’t. I see the nervous eyes darting around the room and the panicked expression when their partner goes to the toilet and leaves them alone.

I’ve even started being honest with acquaintances and emerging friends about it. It’s been heartening when I tell them I’m battling social anxiety and they tell me, “me too.” It feels like we can then rescue each other.

8. It’s exhausting when you confront it.

After an evening of socializing, I always feel exhausted, regardless of whether it went well or not.

When I’m with others, my mind is constantly whirring and on alert. It’s helping me not to come across as unsociable. It’s challenging all the negative talk of the inner voice. It’s picking up on social cues. It’s assessing my performance and then telling myself off for not being authentic.

Carry around a group of critics in your head for a day and you will be fatigued.

9. It’s usually not so bad when you get there.

Most of the time, once I’ve got to a social engagement, it’s not as bad as I thought it would be. Considering my pre-social scenarios run to such ridiculous things as “They’ll notice my extra chin,” or “What will I talk about with the cousin, who I’ve never met, of a work colleague, who might leave me with them when she gets a drink?” It’s understandable.

I can laugh afterward about how I imagined such hilarious non-existent situations but it doesn’t take away from how mentally debilitating it is to battle those thoughts in the first place.

With each successful social engagement, I remind myself I made it. I try to remember for the next one. It doesn’t always work but I keep trying.

10. The scariness of admitting “ugly” truths.

This is a really hard post to write and share. I know there may be people I’ve let down or lied to who will read it and know. All I can do is apologize and hope they can try to understand.

It’s tough telling the world you’re not as together as they might think you are.

You can come across as confident and witty as you like on social media, but the barrier of screens and distance makes for a comforting cushion.

You might even meet me and wonder what on earth I was writing about; “She’s perfectly fine talking to me.” What you won’t see, like the duck’s legs frantically swimming under the water, is that my cogs are going wild underneath too.

Photo by Kelsey Chance on Unsplash 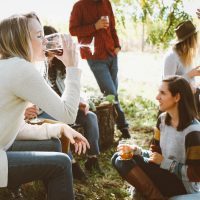