This Young Woman Is Showing There's Nothing 'Down' About Down Syndrome

Eighteen years ago Dawn Sikes had a very different outlook on her daughter’s future than she does today.

“I could only see the negative when Anna was born… I could only see the things she would never do…,” she said. “We would never get to experience pageants, proms, homecoming dances, mommy/daughter days with facials and nail salons. How would she ever do any of this? I felt like God had taken my plans and flushed them down the toilet. I cried for weeks.”

Today, Anna’s proud mother tells a very different story than the one she wrote for herself so many years ago.

Today she tells the story of a young woman who has a list of achievements longer than many of her “typical” peers, who has spent her life breaking down barriers and who is unwittingly transforming the way that the world views Down syndrome. Today she tells the story of that beautiful young woman who just became the first participant with Down syndrome, in the history of Alabama, to compete in the prestigious national scholarship program, Distinguished Young Women. DYW was founded in 1958 and is the largest and oldest scholarship program for young women.

Participants are evaluated and judged on scholastics, interview, talent, a fitness routine and self-expression. The program focuses on each girl “being her best self,”  an attribute that Anna demonstrates daily. She was awarded $500 in scholarships and very proudly went on to win the “Spirit of Distinguished Young Women” award. This award is presented to the participant that embodies the core values that represents DYW program.

I grew up watching Distinguished Young Women and I have dreamed of doing competitions such as this. Having a disability like Down syndrome doesn’t mean I can’t dream. My parents have helped me meet every dream I have ever had.  I have gained confidence. I learned bravery. I have learned to step outside of my comfort zone, as I am not comfortable with public speaking. I am so thankful for the opportunity to compete in the Distinguished Young Women of Choctaw County.

It was a night Anna and her family will never forget.

The DYW program puts emphasis on areas such as academics, physical fitness, morality, character and social and civic participation. Anna is an extremely motivated and determined young lady and has always been dedicated to her academics. She is fully included in mainstream classes at school and is a member of the National Beta Club. Her extracurricular activities include a starting right field position for her high school’s JV softball team and a position on her school’s cheerleading squad. She also just finished up her second year of cheering with the University of West Alabama cheer team. Anna models for Classy Threads Elite Modeling Team and is signed to LOPED Modeling Agency. Even with her busy schedule, Anna still makes time to give back to the community. She volunteers her extra time at Legacy Hospice and just recently accepted a part-time job with the company in addition to her volunteer hours.

Anna may have an extra chromosome, but she’s never let that define her.

She is very much a typical teenager. Despite all of the things that her mother once feared, Anna has an amazing life, filled with a busy social calendar and all the mother/daughter dates that they can squeeze in. She has a tight-knit group of friends and loves attending school dances and sporting events. Senior prom was one of the highlights of her year. One of the things that she is most excited about is learning how to drive. Anna recently passed her permit test and is preparing to get her driver’s license. She has high hopes for her future and refuses to be limited.

Advocating for individuals with disabilities comes naturally to Anna. At only 16 she became an ambassador for Nothing Down, an international nonprofit I co-founded focused on ending the stigmas that often accompany Down syndrome. Through their website and social media pages, Anna’s accomplishments have helped to change perceptions about individuals with Down syndrome, providing hope to families and educating people all around the world. Anna doesn’t set out to break records or shift opinions. She’s just a pretty amazing young lady who is busy living her life. Yet, without even trying, she has changed perceptions across the country and beyond.

Anna Sikes is proving the negative stigmas wrong and is truly showing the world that there is nothing down about Down syndrome.

This story originally appeared on nothingdown.org. 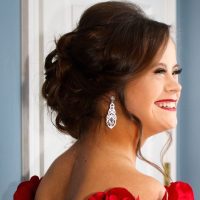