How It Feels to 'Share' My Twin's Chronic Illness

My twin has not been blessed with good health.

At 25 he was diagnosed with a 7-centimeter brain tumor. He had emergency surgery hours after it was discovered and went on to have four more surgeries, chemotherapy and radiation. He survived and the tumor is no longer something we think much about.

He’s undergone two different chemotherapies over the last few years. I’ve watched him take on his health as a hobby, an everyday concern that is monitored and reported. His preferred conversation now is about his health and how he’s doing.

Although I love talking to him about his health, I can’t help but notice some changes in us both.

He’s scared. He’s scared of the world and of planning ahead. He doesn’t think of vacations he’d like to take, he thinks of what tests are coming up next and when he has to be at the hospital.

He’s stopped taking responsibility for his health; he’s began to feel helpless and like some things are out of his control. He admitted to me once that he feels most comfortable in a hospital. It makes sense to me in some ways because he’s not in control and he has someone taking care of him.

I can’t begin to imagine how chronic illness affects the person experiencing it, but I know what I’ve seen and felt. It has not only changed my twin’s life but mine as well.

I am concerned for his health. When I say my twin experiences chronic illness maybe I’m really thinking I’m dealing with it too. I’m dealing with the emotions, the ups and downs, the disappointments and victories.

I share his uncertainty about the future, and I don’t look too far ahead because I fear tomorrow could change our plans.

I shoulder some of the depression he feels because we’re in this together. 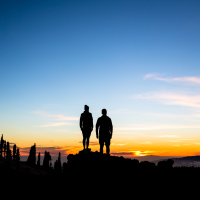