(Sorta) Supportive, a Show About Teens With Chronic Illness, Could Be Coming Your Way

Travis Flores, the show’s producer and writer, has cystic fibrosis and is the recipient of a double lung transplant. Flores is also an award-winning children’s book author. Most of the cast and crew either has a chronic illness or has a family member with one, according to Deadline.

It was my mission to involve a cast and crew who have a personal connection to illness whether it be their own condition, or a loved one’s condition. My community of the chronic, terminal and disabled deserve the opportunity to share their own real-life moments of pain and triumph. That is what I hope ‘(Sorta) Supportive’ will do.

According to the Ruderman Family Foundation, less than 2 percent of characters on television have a disability despite 20 percent of the population having one. When disabled characters are created, most roles go to able-bodied actors.

“Our whole cast and crew all are impacted by illness and disability, whether personally or through family members,” said Shira Strongin, founder of the nonprofit Sick Chicks and is a part of the cast. “This builds a deeper understanding, respect, and community on set for the work that we’re doing while giving actors opportunities who otherwise would be looked over because of their illness and/or disability.”

Strongin, who is also a Mighty contributor, said “(Sorta) Supportive” is vital because it could give an accurate portrayal of living with a chronic illness or disability, which is something Hollywood is lacking. She told The Mighty:

There’s been a recent trend in media involving sharing stories of mentally ill, chronically ill, disabled, or even terminally ill young adults. You’d think this would be wonderful considering our communities desperately need more awareness, however all of these projects portray the experiences of individuals so inaccurately it ends up doing more harm than good.

Other members of the cast include Elaine Hendrix from “Parent Trap,” Hunter Doohan from “Westworld,” and Madison McLaughlin from “Arrow” and “Chicago P.D.” Flores will also star in the show.

“I saw this project as a unique opportunity to portray the kind of character I always wished I got to see growing up,” Strongin said. “One who was unfiltered, deeply flawed, and a total badass all while being sick!”

The show has not been picked up by a network or streaming service yet. The cast and crew will begin shooting later this month, according to Deadline. Once the pilot is finished, it’ll be pitched to networks.

Phaware Global Association, a nonprofit organization that raises awareness for pulmonary hypertension, financed the pilot episode. “We hope this new project will capture and engage diagnosed and undiagnosed PH patients across the world and have a lasting impact on rare disease awareness,” Steve Van Wormer, Phaware’s CEO and co-founder, said.

The show will also feature music from the late Christina Grimmie, who was killed in 2016 after a performance in Orlando. Strongin and Flores were both friends of Grimmie. Grimmie’s family launched the Christina Grimmie Foundation after her death. The foundation supports families affected by breast cancer as well as those affected by gun violence.

Share
or  Copy Link
Link copied to clipboard.
Be first
550 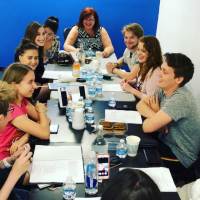