What Being an Athlete With a Chronic Illness Really Means

The pain started when I was doing the thing I love the most: running.

In eighth grade, as I rounded the second lap of the mile, sharp pain exploded in my head, knocking me off balance. Nevertheless, I finished the race, albeit slower than I wanted to and in tears. I dropped out of my next event: the 800m. I figured all I needed was a night’s rest and then I would be better.

Except I never got better.

Six and a half years later, the headache has never stopped; a constant companion from the moment I woke up in the morning to the moment I got to bed. Over the years more symptoms appeared: constant nausea, back pain, allodynia, joint pain, dizziness, brain fog, etc.

But I still keep on running.

I’ll admit it is hard, and there are some days I wished that I loved a more spoonie-friendly activity, but I won’t give it up. I’ve had to give up and compromise too many things, and I feel like I wouldn’t be me if I gave up running too (although my mom and sister probably still wish that I would give it up).

That being said, I still do cross country in the fall and run track in the spring. I’ve even completed three half marathons under two hours. In high school, my coaches were understanding of my pain, and my teammates never made me feel left out. I’m going into my third cross country season in college for the club team now, and it is honestly very different from high school. Aside from the less demanding schedule and more flexibility with the runs, I can’t help but feel different. I am grateful for the close friends I have made through the team and for my teammates themselves, but the differences between their abilities and mine are stark: they have the energy to go through classes, work, internships, and endure long runs and workouts, whereas I run breathless behind, physically and metaphorically.

The social aspect of the team is also different than high school: the team is bigger, more diverse, and because the schedule is less demanding, there is a greater social component: hanging out, team dinners, and social gatherings.

And I can’t help but feel left out.

I am less open about my condition in college than in high school because I’ve learned how people treat you differently when you are sick — as if all of your accomplishments are instantly diminished, and you’ve become incompetent. So I can understand if they don’t realize how much pain I am actually in. But that doesn’t mean it hurts less.

I am writing this on an afternoon where later tonight there will be a team social gathering: the theme is color wars where everyone is on a colored team, and we compete in games like Mario Kart and Jenga. When I first heard about this, I was so excited — parties aren’t usually my scene, especially when others drink and I don’t. I’ve skipped most parties because they start at 10 p.m. and I’m usually dead tired and in bed by then. Regardless, I was looking forward to tonight. And I sit here, typing, after coming to the realization that I’m probably not going, because I can’t. Black dots swarm my vision, and on top of the sharp pains in my head, I am lightheaded and extremely dizzy. The brain fog is so bad that my friend/teammate pointed out that I am not completing any of my sentences.

If you’ve ever had it, you know that brain fog is not fun.

The constant doctor appointments, second opinions, numerous tests, numerous normal test results, skeptical doctors, and going undiagnosed for years have taken their toll — I find myself questioning the validity of my illness. When I tell people about my conditions, it’s safe to say they are surprised to know that I enjoy long distance running. I mean, I don’t enjoy the overall increased pain, tunnel vision, and shortness of breath. I do love losing myself in the rhythm of the run and the environment around me. When I run, the pain doesn’t control me, but is more of a parasitic running partner, almost an equal despite the power it holds over me. People assume because I can comfortably run five miles than I am healthy and fine; that it’s not possible for me to be in constant pain, constantly tired and fatigued. That I should have no problem climbing up stairs or standing up for more than ten minutes without feeling like I’m going to pass out and the black dots swarm my vision. Well, sorry to disappoint, but my body doesn’t work that well.

This past year and a half has been extremely difficult as the pain and symptoms get worse, but I’ve found solace in reading other people’s stories on The Mighty and it’s made me feel less alone. A lot of my friends are physically active and healthy, and it’s hard for me to relate to them because our energy levels are so different. However, I am aware of my privilege to be able to run and go to college, unlike some other chronically ill warriors. And I can’t help but feel like I am an imposter sometimes. But while I respect them, respect their fight, and hope that they have more good days than bad, I shouldn’t invalidate my own illness.

So I sit here writing about my experiences and feelings as student-athlete, albeit at the club level, in hopes that another athlete/chronically ill warrior reads this and knows that they aren’t alone. That it’s not abnormal if you feel terrible and feel left behind — that’s the side effects of having chronic illness(es). Just remember to do things for you, and not because others want you to. What you do is enough, even though it doesn’t always feel like it.

To all the chronically ill warriors, and caretakers too, I hope you have more good days than bad ones to come. 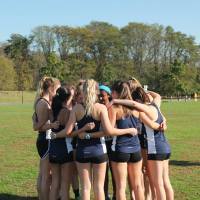