My daughter Callie and I were in the checkout line at Target the other day and I looked behind me. I hadn’t seen him in eight years. He looked the same as he did that day in the hospital. I wondered how it was possible he could look the same when I have changed so much.

Eight years ago, we were huddled around Callie’s incubator. It had been three days since her open heart surgery. She had only been born four days prior. She had a three inch scar that covered her tiny little chest. She was hooked to a million tubes and wires and had a respirator to help her breathe. She had a feeding tube in her nose that went down her throat to help her eat. Each breath was a struggle for her. She didn’t cry and the nurses told us it probably took too much energy for her. She had reddish blonde hair and bright blue eyes. In short, she was the most beautiful thing we had ever seen.

We were told we were going to meet with a specialist about her leg that day because they had noticed her left leg was shorter than her right. The specialist walked in and picked up her chart. He scanned through it, and when he got to the maternal history page he looked up.

“You have diabetes? Well, that’s why she has all the issues that she does.”

I started to sob as my husband pushed him out the door of our room in the NICU. He didn’t know I could hear my husband yelling at him through my wrenching sobs. He didn’t know they had told us the day of Callie’s open heart surgery that she probably would not make it through the surgery, much less survive the following weeks. He didn’t know we had just been given our miracle only to be told we might have to tell her goodbye. He didn’t know.

He didn’t know that both James and I cried tears of joy when we found out we were pregnant. He didn’t know  James would leave me little notes “from” the baby that told me I was going to be a good mommy and they couldn’t wait to meet me. He didn’t know I had a special SAPD onesie made that said “Daddy’s Newest Recruit” and surprised James with it. He didn’t know we picked the name Callie because it meant “beautiful” and her middle name was Grace because she would become our saving grace. He didn’t know Callie would kick extra hard if I listened to hip hop music in the car, and she would start to kick really hard if she heard her Daddy’s voice. He didn’t know we would both put our hands on my tummy at night and tell her “good night.” He didn’t know we painted her room a sunny shade of yellow called “Pooh Bear’s Tummy Yellow.”

I didn’t say anything to him. Instead, I looked at my little miracle. 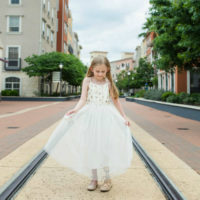