When I think about self-harm, I automatically picture a teenage girl wearing black and harming herself in a bathroom stall while wearing a Daria shirt (I may be dating myself, here).

When self-harm started “coming out,” that was the image the media gave us. Teenage girls harming themselves. “Dramatic. Attention seeking. Manipulative.” Sometimes, they tried to give us more to go on. In an episode of “7th Heaven,” the girl harming herself wasn’t mean and manipulative, but the rest of it was spot on.

I first started self-harm in Junior High. I was tentative at first, and I didn’t try terribly hard to hide it, because I didn’t know it was a thing. I had no idea other people did it, or that it was bad, or anything else.

I didn’t do it regularly for a long time. I harmed myself occasionally, bruised myself with different blunt objects, or by repetitively kicking or hitting something hard.

I was in college when it became more of a habit.

And that was decades ago.

Theoretically, I should have grown out of it. As soon as adolescence was over and growth and hormones all calmed down, I should have just stopped and been the picture of perfect health.

I went through periods where I’d take go into remission; I don’t know what my longest streak was, but a few years, I’d guess.

I got treatment for it in my late teens. Early 30s. I’m still getting treatment now. It’s not tailored just for self-harmers, but it’s a part of my ongoing trauma therapy.

There was always a layer of shame to self-harm. I got used to wearing long sleeves no matter the temperature, to having explanations for scars or bruises.

But the shame of self-harming after having kids is not something I’ve ever experienced.

I feel like a hypocrite for teaching my children coping skills for their anger and fear and sadness while not using those skills for myself.

I feel like a failure for not being able to handle normal stressors of parenting without sometimes needing to run into the bathroom and make just a quick, tiny little mark of self-harm. Anything to slow my swirling brain down.

I’m angry, so angry, at myself for knowing better, having skills, having tools and still harming myself. Doing it anyway. Taking the easy way. I can only imagine how my therapist and husband feel about it.

It’s gotten easier, a bit, to share about my depression and anxiety with others. It’s not as scary to be transparent about those more “common” ailments. But I don’t talk about the self-harm. I don’t want people to know. What would other parents think about me? About my kids? Would they allow their children to play at my house? Would they imagine I whip out a self-harm tool in the family room while serving apple slices and crackers?

I know the time will come when my children notice, and I’ll have to find a way to explain my mental health and trauma history with them in a way they understand. I wish this weren’t true, but kids notice things and I can’t undo what’s already done. I hope, ardently, that I’ll stop for good someday and my explanation will be about “the past.”

I know all I can do now is try. Use my skills. Squeeze an ice cube. Do some breathing exercises. Hold a yoga pose. Text the crisis line. Wait, wait, wait for the moment to pass. Try to hang on to the knowledge that no one can love my kids like I do, no matter what I think of myself. The knowledge that even if I mess up, relapse, whatever you want to call it — I’m still worthy of being a mom. 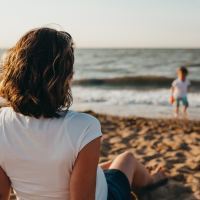