Why I Feel Cancer Saved My Life

Getting cancer was the best thing that ever happened to me. Before I was diagnosed — through a serious of unfortunate events not of my doing — I lost everything and I got really sick. I was already told I was dying before cancer and I accepted it. I accepted it. At the age of 38 I was planning my funeral and writing letters to loved ones. I made plans and controlled every detail of “my end” and then I broke. I stared at a wall for weeks. I didn’t like how sick I felt. I had no energy to get up. I lost my will to live because I accepted that my fate was death — which is something I had never done before. I’ve always been the person who would heed the odds and say, “Yeah, well that’s not me.” This time was different though. I got sicker, older, lost faith and had no reason to get up anymore. No reason to survive. No reason to fight back. Then when I was already dying, the cancer came.

It made me furious… like really furious. I was angry at the injustice and the sequence of events that led to it: the terrible healthcare system, the corporations that forced the doctors to treat the bare minimum, the job that let me go and with it my insurance two days into my FMLA. However, for the first time since I rolled over to die in my numbness, cancer made me feel something. I felt anger and pain… not just bone pain. It made me open my eyes and get angry. It made me think about all the times I let someone else decide my worth. It made me think about all the times I didn’t fight for me and rolled over and cried because no one else fought for me either.

Then the anger turned to drive. I decided I had things I had to do before I died. Cancer is the thing that made me get up and want to see, and do and be, just a little bit more. In doing that — by accident or miracle — I found this trial. Just when I had no hope left, I went to a forum that my friend Karen invited me to and I told my story. I talked openly about the injustice and what it was like to fall through the cracks and to be dying because of it. I talked about the trial I couldn’t afford to go to. I only had mere days to figure it out. I decided if cancer was going to take me I was going to tell my story to help other people, but then something else happened. My friend Tracie stepped in and organized a Facebook fundraising group. In less than two days enough money was raised to get me to the trial.

So that made me think, “Why do I not value myself?” These people want me to live. These people stepped in and lifted me up — literally into a plane — to take me to a miracle. So while I’ve been here and had time to reflect, the group has grown and the love has continued to pour on me. Suddenly, my view has changed. I am grateful to the cancer. I don’t want it. I am not going to die from it, but I’m only not going to die from it because I chose to get up and fight back. When I was too weak and needed something, someone or a lot of someones stepped in to help, and that has changed my life. Cancer is not the thing that ruined my life, it’s the thing that made me decide I want my life and made me get up and fight for it. When I feel tired or sick I read the messages from all of these people in my community holding me up and I think, “This is what cancer gave me.” Cancer isn’t here to end me, it’s here to rebirth me. Cancer is here to save my life. Cancer is not here to save me and send me back to the toxic barely alive existence I was living in but instead to give me the courage to go after the life I have dreamed of having. I had nothing left to lose and now I have everything to gain. 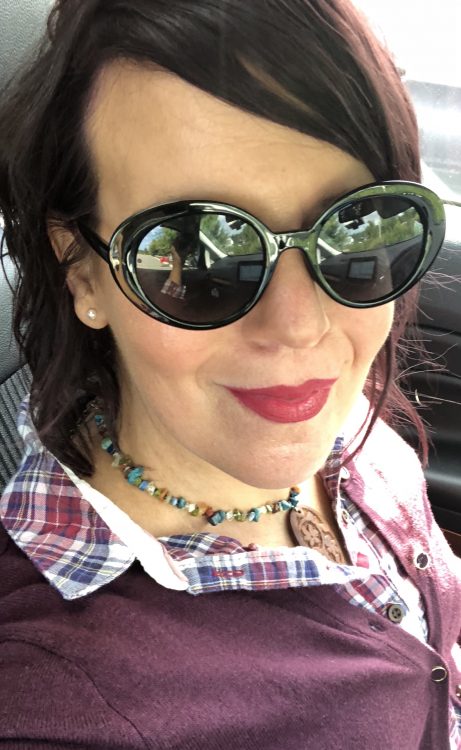 As odd as it sounds, losing everything was what I needed so I could let it all go and figure out what is important. I needed to find myself. I needed to evaluate my life. I needed to get the cancer out physically, mentally, spiritually. In reality, I didn’t lose anything I shouldn’t have gotten rid of on my own. I just didn’t give myself permission to put me first. Now I have to put me first to survive. I have to put on my oxygen mask first. I realized as I was writing this that I walked all 24 stairs today with no oxygen and my leg in an ice cast. A week ago I couldn’t walk all of them without stopping halfway with oxygen on and no cast. Little by little I got further and further and all because I want my life back. Those stairs symbolize something to me. Those stairs made me want to fight to get up them because I should be able to, and I know if I keep trying I can… and I did. Those stairs were the first goal. It sounds trite, but it made me push myself. Those stairs challenged me enough to keep going. Those stairs are cancer, and to live I have to get up them. I have to want up them enough to push myself for it. I have to want my life enough to make choices to overcome different varieties of stairs every day. I don’t want the cancer to “win.” I don’t want the jerks from my job that fired me on FMLA to win. I don’t want the guilt or shame that being chronically ill and always needing things makes you feel to win. I want my life back. I want to own it. Not the victim of the aftermath of what happened to me, not even as a survivor. I am more than the sum of my tragedies.

Every day I have to get up and make choices to live. Cancer has reminded me that no one else has a right to determine my worth except for me. I am making the choice to get up and take back my life. No, I don’t think this is my end at all. This is just the beginning.

Share
or  Copy Link
Link copied to clipboard.
Be first
83